Imagine feeling so desperate, so fearful of this alien ideology invading your country, that you convert all your worldly possessions and those of your family to a single diamond, bite down on that stone so hard it embedded in your shattered teeth, and fled with your family to open ocean in a small boat.  All in the faint and desperate hope, of getting out of that place.  That is but one story among millions.  Those were the lucky ones. 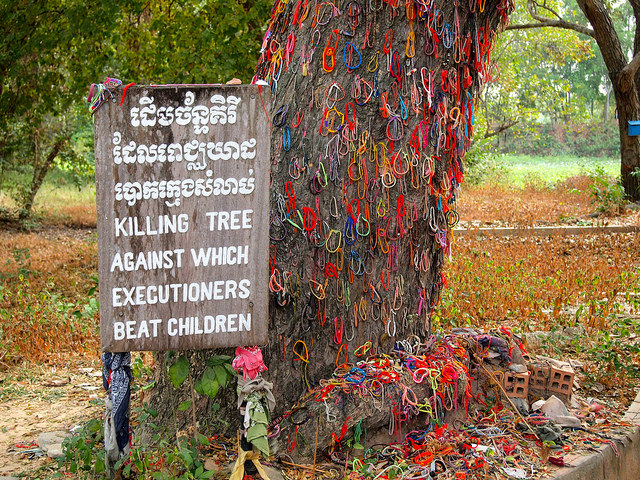 Between the 7th and 14th centuries, the Khmer Empire occupied much of modern-day Cambodia, Thailand, Laos, and southern Vietnam.  Now extinct, this powerful civilization was once home to the largest city in the world.  Until recently overrun by Jungle, the capital city of Angkor, whose original name was Yashodharapura (“Glory-bearing city”), was nearly the size of modern day Los Angeles, and home to roughly a million people.

Even today, the Hindu temple complex of Angkor Wat, built circa 1122, remains one of the largest religious monuments in the world.

During the 1950s, a group of some 200 middle-class Cambodian kids were educated at French Universities.  The greater part of that group formed a student organization of Marxist-Leninist intellectuals, dreaming of an agrarian utopia on the Indo-Chinese peninsula.

What began as a small leftist insurgency grew in power, thanks to support from Communist China and North Vietnam.  From only a few hundred individuals in 1960, these “Red Khmers” (Khmer Rouge) grew into an effective insurgency against the Khmer Republic’s government of King Norodom Sihanouk and Prime Minister Lon Nol.  By early 1975, the Khmer Rouge had overwhelmed Khmer National Armed Forces. 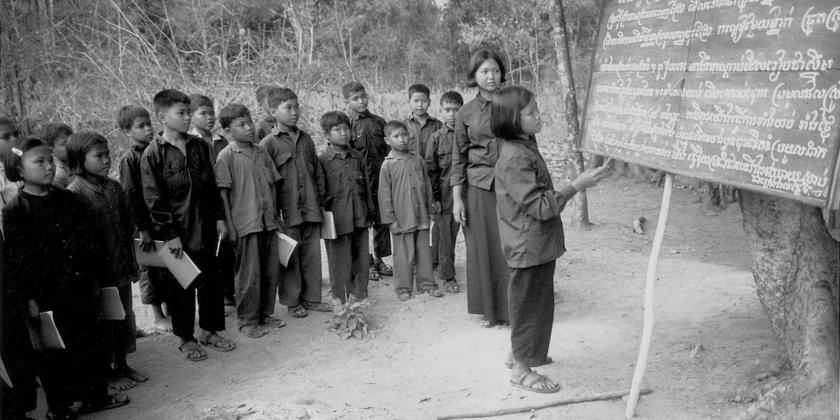 As the last, humiliating scenes of America’s war in neighboring Vietnam played themselves out in the capital of Saigon, Khmer Rouge forces captured the Cambodian capital at Phnom Penh, overthrowing the Khmer Republic and executing its officers.

This was to be “Democratic Kampuchea”, the name representing a local pronunciation of the word as it comes into English, as Cambodia.

The Kampuchean constitution, formally approved this day in 1976, theoretically vested power in a 250-member, directly elected “Kampuchean People’s Representative Assembly”.  This body met once in April, and never again.  Unlike the cult of personality grown up around the Kim family of North Korea or that of the Stalinist USSR or Maoist China, all power in the CPK (Communist Party of Kampuchea) belonged to “The Center”, a shadowy, nine-member standing committee of those same leftist intellectuals from the Paris student days, led by Prime Minister and Communist General Secretary Saloth Sar, better known as ‘Pol Pot’.

This nine-member “Angkar”, (pronounced ahng-kah), meaning ‘The Organization’, ushered in one of the great horrors of the twentieth century, a four-year genocide remembered as the “Killing Fields”, of Cambodia.

The “Khmer Rouge”, self-described as “The one authentic people capable of building true communism”, murdered or caused the deaths of an estimated 1.4 to 2.2 million of their own people, out of a population of 7 million. All to build the perfect, agrarian “Worker’s Paradise”.

Imagine feeling so desperate, so fearful of this alien ideology invading your country, that you convert all your worldly possessions and those of your family to a single diamond, bite down on that stone so hard it embedded in your shattered teeth, and fled with your family to open ocean in a small boat.  All in the faint and desperate hope, of getting out of that place.  That is but one story among millions.  Those were the lucky ones.

The very embodiment of the “ivory tower intellectual”, the Angkar was detached and incapable of connection with the masses.  Theirs was a radicalized ideology, heavily influenced by French communists and the writings of Lenin and Mao, and heavily tinged with ideas of racial superiority.  Paradoxically, it was a creed altogether averse to an educated or merchant class and determined to use violence in pursuit of “class struggle”. 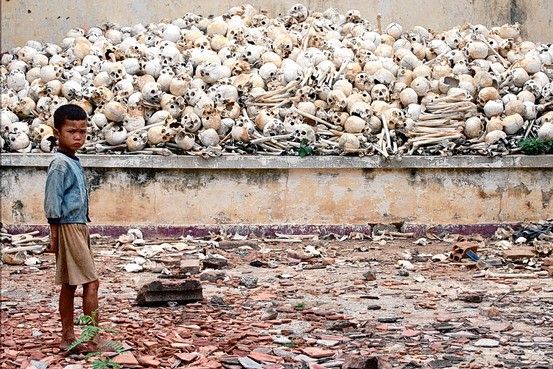 The Khmer rouge set out to create a peasant’s utopia.  An agrarian, atheist state.  Among the first to go were the Buddhist monks, nearly 25,000 of them murdered, most often with a rock, or a club.  All religion was banned, repression of Christians and Muslims, extensive.

For generations, European colonists exploited the mineral resources of “French Indochina”.  Now, abandoned mine shafts filled with the bones of the slain.

Whole cities were liquidated as “parasitic” and “corrupt”.  Shop owners, business people and educators.  Police officers, government employees and ethnic minorities such as Chinese, Vietnamese and Cham.  All were driven from their homes and murdered as “class enemies”.  Anyone who so much as wore eyeglasses or owned a wristwatch, was as good as dead.

Today, the Tuol Sleng (“Hill of Poisonous Trees”) Genocide Museum occupies the former  Chao Ponhea Yat High School, operated during the Cambodian Genocide as Security Prison 21.  In its day, “S-21” held and estimated 20,000 people at one time or another – no one knows for sure.   Between 1976 and ’79, only seven adults survived this place.

The Khmer Rouge operated at least 150 such torture and execution facilities.

There, Khmer interrogators extracted “confessions” by torture.  After two to three months, victims would eagerly agree to anything, thousand-word “confessions” weaving true stories into outlandish tales of conspiracy with Vietnamese, KGB and CIA operatives.  Friends, families and acquaintances would be identified in such narratives as they in turn, would be brought in for “interrogation”.

All were turned over to extermination centers, where squads of blank-eyed teenagers awaited with machetes, pick axes and iron bars.  Ammunition was too expensive.

The vast majority of victims were Cambodian, but not all.  488 Vietnamese passed through S-21, as did 31 Thai, one Laotian, an Arab, one Brit, four French, two Americans, a Canadian, one New Zealander, two Australians, and an Indonesian. An unknown number of Indians and Pakistanis also passed through the facility.  Not one foreigner survived.

The Khmer Rouge is estimated to have executed over 1.38 million people in this way, with death by starvation, torture, overwork and disease accounting for some 2½ million more.  Twenty-five per cent, of the entire nation.

The last straw came on April 18, 1978, four miles over the border into Vietnamese territory.  Khmer Rouge troops took a page out of their own playbook, murdering 3,000 Vietnamese civilians in what came to be known as the Ba Chuc Massacre.

“The Khmer Rouge then used the same formula for execution as in Cambodia. ‘They pointed their weapons and ordered us to come to a meeting with their superiors,’ said Nga, a dignified, soft-spoken woman.

She was forced toward the border with parents, siblings, husband and six children. Suddenly, their escorts began clubbing the children. Her youngest daughter was struck violently on the head three times and cried ‘Mother, Mother.'”

Four years earlier, North Vietnam had helped the Khmer Rouge take power.  Now the Vietnamese government staged a massive invasion of its neighbor.  By January 7, 1979 it was over, the Khmer regime toppled and a new government installed in Phnom Penh.

Cambodian journalist Dith Pran managed to escape the regime, one among millions swept up in the humanitarian disaster in the wake of the war in Vietnam, and the “Killing Fields” of Cambodia.   It was he who coined the term.

Justice was slow in coming.  Most senior Khmer officials would not be tried, until well into the twenty-first century.  Pol Pot died quietly in his bed, in 1998.

Feature image, top of page:  At least 10,000 children were bashed to death against “killing trees”, of which this is but one.