That afternoon, a single mangled soldier rode into Jalalabad on a wounded horse. He was Dr. William Brydon. When asked where the army was, Brydon replied “I am the Army”. 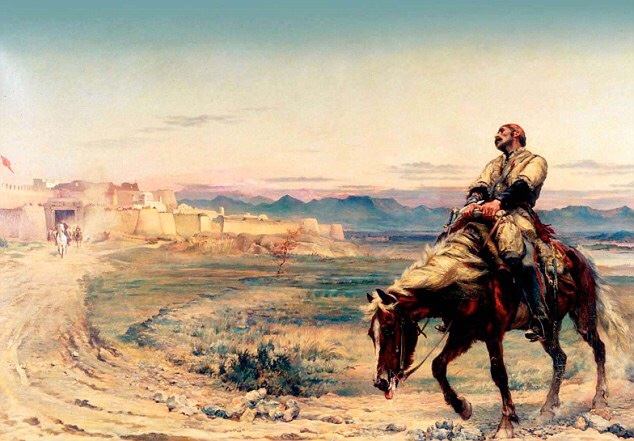 The British East India Company was a British joint stock company, chartered by Queen Elizabeth in 1600 with a trade monopoly in Southeast Asia and India. It was the first of several such companies established by European powers, followed closely by the East India Companies of the Dutch, Danish, Portuguese, French and Swedish, and associated with the valuable trade in such commodities as cotton, silk, indigo, salt, saltpeter, tea and opium.

These organizations were much more than what we associate with the word “company”. In their day they could raise their own armies, enforce the law up to and including trial and execution of accused wrong doers, and largely functioned outside the control of the governments that formed them. By the early 19th century, the British East India Company ruled over large areas of India with its own private armies.

Firmly entrenched by the 1830s and wary of Russian encroachment south through Afghanistan, the British tried without success to form an alliance with the Emir of Afghanistan, Dost Mohammad Khan.

Lord Auckland’s “Simla Manifesto” of October 1838 laid out a justification for British intervention in Afghanistan, based on the need for a trustworthy ally on India’s western frontier. The pro-British, Shuja Shah Durrani was installed as ruler, backed up by an army of 21,000 British and Indian troops under the command of Lieutenant General John Keane, 1st Baron Keane, veteran of the Peninsular War, and the battle of New Orleans.

Most of these troops returned to India the following year, as Dost Mohammad unsuccessfully attacked the British and their Afghan protégé, only to be defeated and exiled to India in late 1840.

By 1841, disaffected Afghan tribesmen were flocking to support Dost Mohammad’s son, Akbar Khan, against what they saw as an occupying force. There were warning signs of the deteriorating situation as the spring of 1841 turned to summer, and British freedom of movement around Kabul became increasingly restricted. The British government in India was dismayed at the cost of keeping the Kabul Garrison, when they cut off funds, ending the stream of bribes that all but kept the tribes in check.

It was around this time that Sir William Elphinstone stepped in as commander of the Kabul Garrison. Described by fellow General William Nott as “the most incompetent soldier who ever became General”, Elphinstone found himself in charge of 4,800 Indian and British troops, along with 16,000 camp followers: families, servants and civilian workers.

On November 2 1841, Akbar Khan proclaimed a general revolt. Several British officers were murdered along with their families, servants and staff. Afghan leaders invited Civil servant Sir William Hay MacNaghten for tea in December to discuss the situation; only to seize and murder them as the delegation dismounted their horses.

On January 1, Elphinstone agreed to hand over all powder, his newest muskets and most of his cannon, in exchange for “safe passage” out of Kabul, guaranteed by Akbar Khan along with the protection of the sick, wounded and infirm left behind. 16,000 soldiers and civilians moved out on January 6, heading for Jalalabad, 90 miles away.

Akbar Khan’s “safe passage” lasted about as long as it took the column to get out in the open, when Afghans moved in firing at retreating troops while setting fire to garrison buildings containing those left behind.

At one point Akbar Khan met with Elphinstone, claiming ignorance of any betrayal. He claimed that he had been unable to provide the promised escort because they had left earlier than expected, and then asked Elphinstone to wait while he went ahead and negotiated safe passage with local tribesmen.

The delay accomplished nothing more than to allow Akbar Khan time to set up the next ambush. By the evening of the 9th, the column was only 25 miles outside of Kabul. 3,000 people were dead, mostly killed while fighting or frozen to death, while a few had taken their own lives. By January 12, the column was reduced to only 200 soldiers and 2,000 camp followers

The last stand took place on a snow-covered hill near the village of Gandamak, on the morning of January 13, 1842. 20 officers and 45 British soldiers were surrounded, with an average of two rounds apiece. That afternoon, one mangled soldier rode into Jalalabad on a wounded horse. He was Dr. William Brydon. Brydon had part of his skull sheared off by an Afghan sword. He was only alive because of a Blackwood’s Magazine, stuffed into his hat to fight off the cold of the Hindu Kush. When asked where the army was, Brydon replied “I am the Army”.

In the end, 115 captured officers, soldiers, wives and children lived long enough to be released. Around 2,000 Sepoys and Indian camp followers eventually made their way back to India, while others were sold into slavery, or abandoned to a life of beggary.

The 1842 Kabul expedition was the most egregious loss to British arms in history, eclipsed only by the fall of Singapore 100 years later, nearly to the day.

According to legend, Brydon’s horse lay down on arrival in Jalalabad, and never got up again.