No less a figure than Wilt Chamberlain said “Meadowlark was the most sensational, awesome, incredible basketball player I’ve ever seen. People would say it would be Dr. J or even Jordan. For me it would be Meadowlark Lemon”.

In 1926, 24 year old Abraham Saperstein organized a basketball team.  He called it the “Savoy Big Five,” after Chicago’s famous Savoy Ballroom.  At least that’s what the official team history says, except the Savoy didn’t open until 1927, so we may have to just go with it. 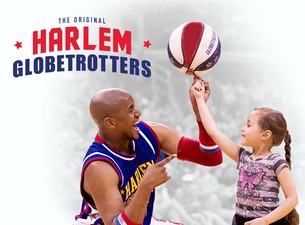 Saperstein renamed them the “Harlem Globetrotters”, even though they were from Chicago, the team arriving in a Model “T” Ford for their debut game on January 7, 1927.   For two years it had been exhibition games before dances.  Now, the big game in Hinckley, Illinois would be played in front of 300 fans, with a total game payout of $75.

They toured Wisconsin, Minnesota, and Iowa, playing almost every night against any and all challengers. Saperstein himself sometimes suited up to fill in for an injured player.  The Globetrotters played their 1000th game in Iron Mountain, Michigan in 1934.

multi-sport athlete and teammate of Satchel Paige, Tatum would entertain the crowd with comedic routines whenever he put a runner out.  He was 6’4″ with an 84″ wingspan, able to touch his knees without bending. He’s credited with inventing the hook shot, an early version of the “skyhook” that would make Kareem Abdul-Jabbar famous, 30 years later.

Tatum was the original “Clown Prince” of the Globetrotters, though that title more often goes Meadowlark Lemon and his confetti-in-the-water-bucket routine.  Tatum combined natural athletic ability with a comedic timing that would change the whole direction of the club.  He passed away in 1967 at the age of 45, when sports reporter Lawrence Casey of the Chicago Daily Defender wrote, “Like Joe Louis in boxing, Babe Ruth in baseball, Bobby Jones in golf, Goose Tatum was king of his chosen sport.”

When Goose was drafted into the Army Air Corps in 1942, the Globetrotters signed their

third Caucasian, the first-ever white player to be offered a contract, Bob Karstens.  Karstens was the newest showman on the team, creating the signature pregame “Magic Circle,” the behind-the-back backhand shot, the “yo-yo” basketball and the “goofball,” a basketball filled with weights to give it a crazy bounce.  It was the early 1940s and the Harlem Globetrotters were the most famous, and the most profitable, professional basketball franchise in the world.

A near-fatal car accident cost Boid Buie his left arm when he was 13.  Never a great athlete before the crash, he worked so hard on his goals that Buie became the “One Armed Firecracker”.  He signed with the Globetrotters in 1946, playing 9 seasons as a starter and averaging 14 points per game.  Ever since the 2011 Elite Showcase Basketball Classic, the MVP Award is presented in the name of Boid Buie.

The Globetrotters were a serious basketball team throughout the early years, winning the World Professional Basketball Tournament as late as 1940.  They gradually worked more comic routines into their game in the late 40s and 50s as the newly founded NBA gained popularity until finally, they were better known for entertainment than for sport.

“Playing the bones” has a musical history going back to ancient China, Egypt, Greece and Rome.  Part of 19th century minstrel shows and traditional to musical genres ranging from Irish, to Bluegrass, to Zydeco. Freeman Davis’ “Brother Bones” recording of the 1925 jazz standard “Sweet Georgia Brown” became the Globetrotters’ theme song in 1952.

Former point guard with the NBA Baltimore Bullets, Louis “Red” Klotz, formed an exhibition team in 1952 to play against the Globetrotters.  In a nod to future President Dwight Eisenhower, he called them the Washington Generals.  The Generals played serious basketball while their opponents juggled balls, spun them on fingertips, and made trick shots.  The two teams played 13,000 games between 1953 and 1995, of which the Generals actually won 6.

Those of us who came of age in the 70s remember Curley Neal and Meadowlark Lemon, 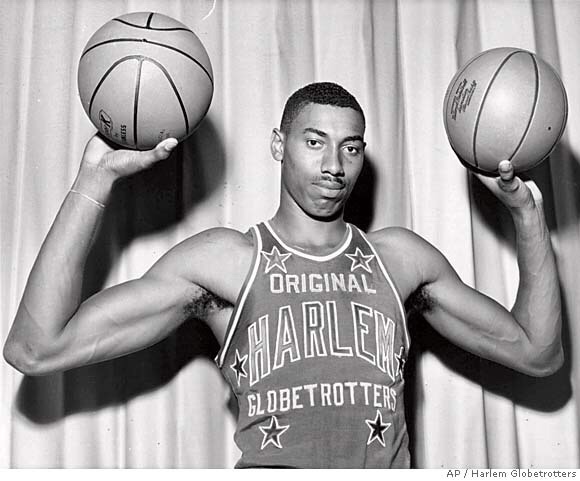 who joined the club in 1954.  Who remembers that Wilt “the stilt” Chamberlain joined theteam four years later?  Chamberlain would be the first Globetrotter to have his jersey retired.

Chamberlain and the Globetrotters did their part to warm the Cold War, with a nine game series in Moscow, in 1959.  The Generals stayed at home, this time they brought the “Chinese Basketeers”.  An audience of 14,000 sat in stupefied silence, finally warming when they realized that this was more show than sport.  The team was paid the equivalent of $4,000 per game which could only be spent in Moscow, prompting the American press to observe that the Soviets were becoming capitalists.

Abe Saperstein passed away in 1966, aged 63.  The owner and founder of the Harlem Globetrotters, he was also founder and first Commissioner of the American Basketball League, and inventor of the three point shot.   Elected to the Basketball of Fame in 1971.  Here’s a great trivia question for you.  At 5’3″, Saperstein is the shortest male member in the place.  In 2005, he was inducted into the National Jewish Sports Hall of Fame.

Saperstein’s creation went on, signing Olympic Gold Medalist Lynette Woodard their first ever female player in 1985.  Pope John Paul II became an honorary Globetrotter in 1986, in a ceremony in front of 50,000 in Saint Peter’s Square.

The list of official honorary Globetrotters includes Henry Kissinger, Bob Hope, Kareem Abdul-Jabbar, Whoopi Goldberg, Nelson Mandela, Jackie Joyner-Kersee, and Jesse Jackson.  Jesse Owens, the track star who stuffed Adolf Hitler at the 1936 Berlin olympics, accompanied the Globetrotters to Berlin in 1951.  Bill Cosby and Magic Johnson are both signed to $1 a year lifetime contracts, though Cosby’s contract was increased to $1.05 in 1986.

Ninety years after their founding, the Harlem Globetrotters show no signs of slowing down.  In 2015, the team drafted 6’6″ 2015 college slam dunk champion LaQuavius Cotton from Mississippi’s Delta State University, and trick shot expert “Dude Perfect” of Mickinney, Texas.  How do you not root for a team with two guys named LaQuavius Cotton and Dude Perfect?

Shortly before he passed in 1999, Wilt Chamberlain was asked about the greatest basketball player of all time.  “Meadowlark was the most sensational, awesome, incredible basketball player I’ve ever seen.  People would say it would be Dr. J or even Jordan. For me it would be Meadowlark Lemon.”  Meadowlark Lemon played over 16,000 games with the Harlem Globetrotters before retirement, and passed away on December 27, 2015 in Scottsdale, Arizona, aged 83.  Rest in Peace, sir.  You brought a lot of smiles to the little boy in me.

Most were killed where they stood in the pyroclastic surge, that ground-hugging pressure wave seen in test films of nuclear explosions.  Gasses and pulverized stone dust race outward at 400 MPH in the “base surge” phase, super-heated to 1000° Fahrenheit, instantaneously converting all bodily fluids, to steam.

On February 5 in the year AD 62, an earthquake estimated at 7.5 on the Richter scale shook the Bay of Naples, spawning a tsunami and leveling much of the coastal Italian towns of Pompeii and Herculaneum, and surrounding communities.

Massive though the damage had been, the region around Mt. Vesuvius and the Bay of Naples had long been a favorite vacation destination for the upper crust of Roman society, with crowds of tourists and slaves adding to some ten to twenty thousand townspeople, bustling in and out of the city’s bath houses, artisans’ shops, taverns and brothels. 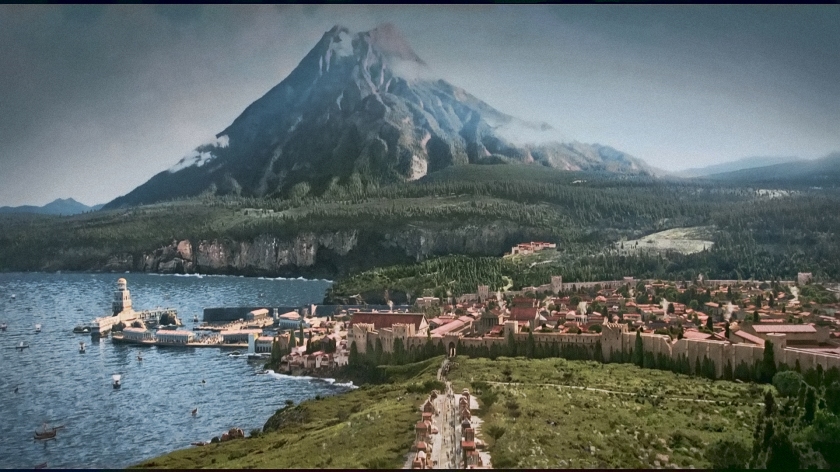 Reconstruction began almost immediately and continued for the next seventeen years.  Until that day, the world came to an end.

Long dormant and believed extinct, nearby Mount Vesuvius had been quiet for hundreds of years.  The mountain erupted on August 24 in the year 79,  propelling a scorching plume of ash, pumice and super-heated volcanic gases so high as to be seen for hundreds of miles.

The Melbourne Museum has created a stunning, eight-minute animation, of the event.

For the next eighteen hours, the air was thick with hot, poisonous gases, as volcanic ash rained down with pumice stones the size of baseballs.  No one who stayed behind stood a chance, nor did countless animals, both wild and domestic.

Most were killed where they stood in the pyroclastic surge, that ground-hugging pressure wave seen in test films of nuclear explosions.  Gasses and pulverized stone dust race outward at 400 MPH in the “base surge” phase, super-heated to 1000° Fahrenheit, instantaneously converting all bodily fluids, to steam.

For those left alive, the suffocating, poisonous clouds of vapor and rock dust pouring into the city, soon  put and end to all that remained.  Imagine putting your head in a bag of cement, with someone pounding the sides.  Walls collapsed and roofs caved in, burying the dead under fourteen feet or more of ash, rock and dust. Neither Herculaneum, Pompeii nor their surrounding communities would see the light of day, for nearly two thousand years.

Today, we remember the Roman author, naturalist and military commander Gaius Plinius “Pliny’ Secundus for his work Naturalis Historia (Natural History). We see his work in the editorial model of the modern encyclopedia.

With the cities of Pompeii and Herculaneum already destroyed, Pliny raced to the port of Stabiae some 4½km to the southwest, to rescue a friend and his family. The sixth and largest pyroclastic surge trapped his ship in port, killing the author and everyone in the vicinity. That we have an eyewitness to the event is thanks to two letters written by Gaius Plinius Caecilius Secundus (Pliny the Younger), Pliny’s nephew and a man he had helped to raise, from boyhood.

Property owners and thieves returned over time to retrieve such valuables as statues. The words “house dug” can still be found, scrawled on the walls.  And then the place was forgotten, for fifteen hundred years.

An underground channel was dug in 1562 to redirect waters from the river Samo, when workers ran into city walls.  The architect Domenico Fontana was called in and further excavation revealed any number of paintings and frescoes, but there was a problem.

According to the Annus Mirabilis written by English poet Philip Larkin, sex was invented in the British Isles, in 1963.

Pompeii was first excavated in earnest in 1748, but it took another hundred years for archaeologists’ findings to be cataloged, and brought to museums.  In 1863, archaeologist Giuseppe Fiorelli realized that occasional voids in the ash layer were left by the long since decomposed bodies of the doomed victims, of Vesuvius.

A technique was developed of injecting plaster.  Today we can see them in excruciating detail, exactly where they fell.  Men, women and children, the dogs, even the fresh-baked bread, left out on the counter to cool.

Today you can tour the lost city of Pompeii, from the baths to the forum, to the Lupanar Grande, where the prostitutes of Pompeii once “entertained” clients.  Ongoing excavation is all but a race with time, between uncovering what remains, and preserving what is.  Walls surrounding the “House of the Moralist” collapsed in 2010, so-called because its wealthy wine merchant owners posted rules of behavior, for guests to follow: “Do not have lustful expressions and flirtatious eyes for another man’s wife“. 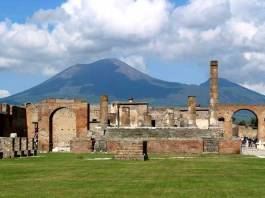 Heavy rains were blamed for the collapse of the Schola Armatorium in 2010, the House of the Gladiators.  Fierce recriminations have followed and doubt has been cast on local authorities’ abilities, to properly preserve what has become a UNESCO World Heritage site.

Be that as it may, 2,000-year-old buildings do not come along every day.  There is no replacement for antiquity.