A Christian military force under Pelagius,(aka “Pelayo”), the future first King of Asturias, met the invaders at “Covadonga”, meaning “Cavern of the Lady”.  The Arabic name for the place is “Sakhrat Bilāy” “the Rock of the Affliction”.  The two names tell the tale about the outcome, of the battle. 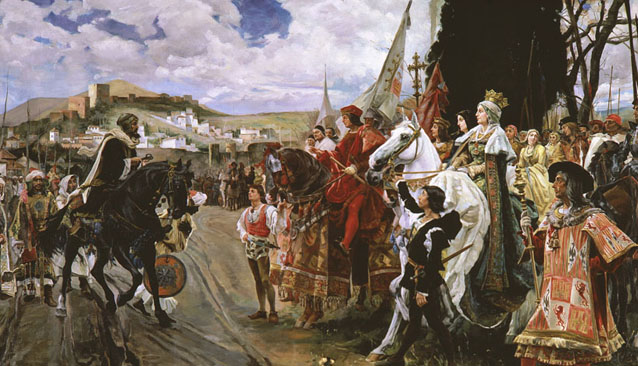 The manner by which Roderic ascended to the throne of the Visigothic Empire is unclear. His history as any other, was written by the victors.  Unbiased contemporary sources do not appear to exist. What Is known is that someone in the early 8th century Iberian Peninsula, thought Roderic an illegitimate King.

That someone appears to have gone to Mecca looking for help from the BanūʾUmayya, the “Sons of Umayya”, the second such center of Islamic power since the time of Muhammad and known to history as the Umayyad Caliphate.

In 711AD, a force of some 1,700 Arab and North African horsemen, the Berbers, landed on the Iberian Peninsula led by Tariq Ibn Ziyad.  384 years before the first Christian Crusade, the Umayyad conquest of Hispania was on.  Within ten years, most of what we now know as Portugal and Spain had become “al-Andalus”; five administrative districts under Muslim rule, save for the fringes of the Pyrenean mountains, and the highlands along the northwest coastline.

The first significant Christian victory and what may constitute the beginning of reconquest, “La Reconquista”, took place along that northern fringe. That sliver of Christianity was the Kingdom of Asturias. The refusal to pay the Jizya, the Muslim tax on “unbelievers”, brought them into conflict with an Umayyad force in the summer of 722.

A Christian military force under Pelagius, (aka “Pelayo”), the future first King of Asturias, met the invaders at a place called “Covadonga”, meaning “Cavern of the Lady”.  The Arabic name for the place is “Sakhrat Bilāy” “the Rock of the Affliction”.  The two names tell a tale about the outcome, of the battle.

The Arab chronicles record Covadonga as a small skirmish while the Spanish record a great victory, but two things are near certain. In 770 years, no Muslims force ever returned to Asturias.  Without Pelagius’ victory at Covadonga, we’d almost certainly never have heard of Ferdinand and Isabella, let alone a certain Italian explorer whom the pair sent off in 1492, in search of a sea route to China.

It was close to 400 years before the crusading knights of Europe came to the aid of the Iberian Kings. With help from the Knights Templar and Hospitaller. Alfonso VI captured Toledo in 1085, beginning a long period of gradual Muslim decline. 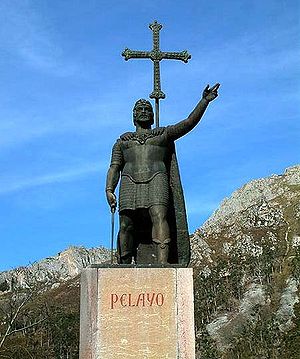 The Portuguese nation was a mere county in the early 12th century, dependent on the Crown of León and Castile, one Alfonso VII. His cousin, three year old Alfonso Henriques, followed his father as the Count of Portugal in 1122.

At the age of 14, the age of majority in the 12th century, the boy proclaimed himself a knight and raised an army against his cousin. The county’s people, church and nobles were demanding independence when, his cousin vanquished, Alfonso Henriques declared himself Prince of Portugal. Following ten years of near-constant fighting against Moors and rival Christian Kingdoms alike, Alfonso was unanimously proclaimed the King of an Independent Portugal on July 25, 1139.

Portugal would be annexed to Spain in 1580, regaining its independence sixty years later and leading many to believe that Portugal is the younger between the two countries. It isn’t so. Portugal was an independent, self-governing nation, more that 350 years before her Spanish neighbor.

Following the Christian re-conquest of Córdoba in 1236, the Emirate of Granada was all that was left of al-Andalus. Granada became a tributary state to the Kingdom of Castile two years later.  Finally, on this day in 1492, Emir Muhammad XII surrendered the Emirate of Granada to Queen Isabella I of Castile, and her husband King Ferdinand II of Aragon.

For the six years I’ve written “Today in History”, the first thing I do is search on a date, and select an interesting topic from the list.  To date, I’ve written about seven hundred.

As I review these lists, I am perpetually surprised and not a little horrified, at the never ending recurrence of barbarity against the Jews of the world. It’s not the pogroms and the massacres which surprise me, but rather their appalling frequency, over 2,000 years.

The paroxysm of cruelty and paranoia now known as the Spanish Inquisition begun in 1478, was not a standalone event. In part, this passion for religious unity was the result of 700+ years of Muslim domination of the Iberian Peninsula. One of the early results of this manic drive for ideological purity was the Edict of Expulsion of 1492, resulting in the forced conversion of some quarter-million Spanish Jews, the “conversos“, and the expulsion of as many as 100,000 more.

Untold numbers lived lives of “marranos” (from the Hebrew marit ayin: “the appearance of the eye”), secretly practicing Jews forced on pain of death, to adopt the outward signs of Christianity. 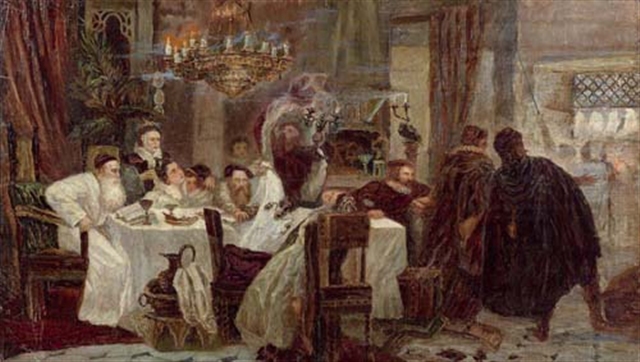 This date, originally selected to signify Ferdinand and Isabella’s final defeat of the Islamic conquest of Spain, has yet another significance. It is only within living memory that descendants of Spanish Jews, the Sephardim, have returned in any significant numbers to their homeland. The first native Jewish child born in Spain since Christopher Columbus discovered America, was born on this day, January 2, 1966.