Molasses, waist deep, covered the street and swirled and bubbled about the wreckage … Here and there struggled a form—whether it was animal or human being was impossible to tell. Only an upheaval, a thrashing about in the sticky mass, showed where any life was … Horses died like so many flies on sticky fly-paper. The more they struggled, the deeper in the mess they were ensnared. Human beings—men and women—suffered likewise

On May 6, 1954, Roger Bannister became the first human to run a sub-four minute mile, with an official time of 3 minutes, 59.4 seconds.

Jamaican sprinter Usain Bolt is the fastest man who ever lived. At the 2009 World Track and Field Championships, Bolt ran 100 meters at an average 23.35 mph from a standing start, and the 20 meters between the 60 & 80 markers, at an average 27.79 mph.

It would come as a rude shock to both of those guys, that they are literally slower than cold molasses.  In January.

In 1919, the Purity Distilling Company operated a large molasses storage tank at 529 Commercial Street, in the North End of Boston. Fifty feet tall and ninety feet wide, the tank held 2.32 million gallons, about 14,000 tons of the sweet stuff, awaiting transfer to the Purity industrial alcohol distillation plant, in Cambridge.

If you were there at about 12:30, the first sound you might have heard was a rumble, like the sound of a distant train. The next sound was like that of a machine gun, as rivets popped and the two sides of the metal tower split apart.

The collapse hurled a wall of molasses 40′ high down the street at 35 miles per hour, smashing the elevated train tracks on Atlantic Ave and hurling entire buildings from their foundations. Horses, wagons, and dogs were caught up with broken buildings and scores of people as the brown deluge sped across the North End. Twenty municipal workers were eating lunch in a nearby city building when they were swept away, parts of the building thrown fifty yards. Part of the tank wall fell on a nearby fire house, crushing the building and burying three firemen alive.

In the 17th century, Sir Isaac Newton described the physical properties of fluids. Water, a “Newtonian” fluid, retains a constant viscosity (flow) between 32° and 212°, Fahrenheit. We all know what it is to swim in water, but a “non-Newtonian” fluid such as molasses, acts very differently. Non Newtonian fluids change viscosity and “shear”, in response to pressure. You do not propel yourself through non-Newtonian fluid, the stuff will swallow you, whole. Not even Michael Phelps is swimming out of all that gunk.

In 1983, a Smithsonian Magazine article described the experience of one child: “Anthony di Stasio, walking homeward with his sisters from the Michelangelo School, was picked up by the wave and carried, tumbling on its crest, almost as though he were surfing. Then he grounded and the molasses rolled him like a pebble as the wave diminished. He heard his mother call his name and couldn’t answer, his throat was so clogged with the smothering goo. He passed out, then opened his eyes to find three of his four sisters staring at him”.

All told, the molasses flood of 1919 killed 21 people, and injured another 150. 116 cadets from the Massachusetts Nautical School, now Mass Maritime Academy, were the first rescuers on-scene. They were soon followed by Boston Police, Red Cross, Army and Navy personnel. Some Red Cross nurses literally dove into the mess to rescue victims, while doctors and surgeons set up a makeshift hospital and worked around the clock.

It was four days before the search was called off for additional victims. The total cleanup was estimated at 87,000 man-hours.

The men playing cards at the firehouse looked out the windows and saw a dark wall that didn’t belong there. Whatever it was, the wall was coming right at them.

The rupture resulted from a combination of factors. Construction was so poor, locals knew they could come down and collect household molasses from drippings down the outside of the thing, which was leaking so badly it was painted brown to hide the leaks.

This was only the 6th or 7th time the tank had been filled to capacity, and rising temperatures almost surely helped to build up gas pressure inside the structure.

With temperatures being so cold, the rapid spread of all that molasses made no sense. The proverbial “cold molasses” had exploded it seemed, in January.  Newspapers speculated that there must be something more. A bomb, perhaps.

Newspapers would more profitably have resorted to their physics books. In fluid dynamics, a “gravity current” describes the horizontal flow in a gravitational field, of a dense fluid into a fluid of lesser density. Think about the way cold air rushes through an open doorway into a warm room, even with no wind behind it.

Today, the site of the Great Molasses Flood is occupied by a recreational complex called Langone Park, featuring a Little League ball field, a playground, and boccie courts. The Boston Duck Tours DUKW’s regularly visit the place with their amphibious vehicles, especially the dark brown one. The one with the name “Molly Molasses”, painted on its side. 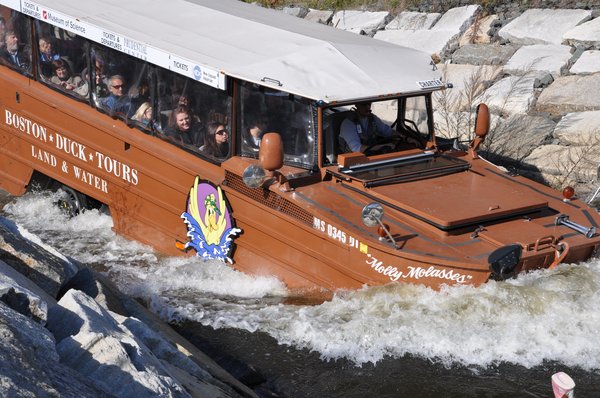