Over a hundred years later you can still feel anguish from the man’s diary: “The worst has happened…All the day dreams must go…Great God! This is an awful place”. 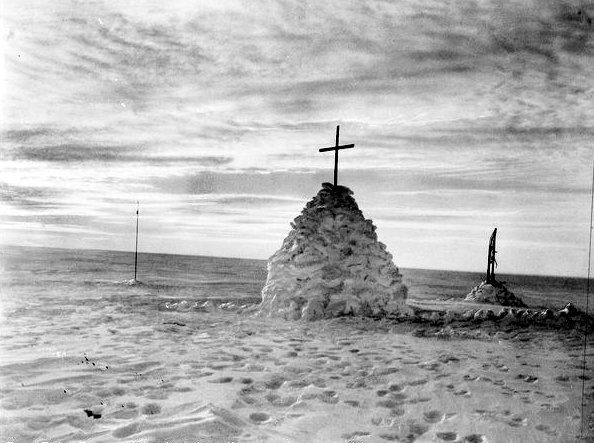 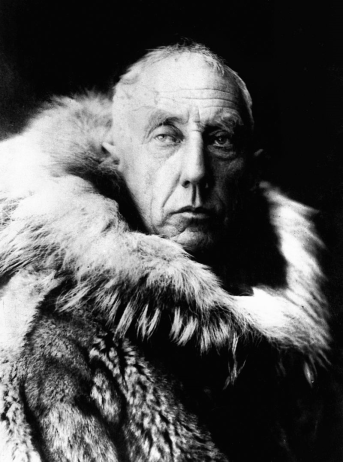 As long as he could remember, Roald Amundsen wanted to be an explorer.  As a boy, he would read about the doomed Franklin Arctic Expedition, of 1848.  A sixteen-year-old Amundsen took inspiration from Fridtjof Nansen’s epic crossing of Greenland, in 1888.

The period would come to be called the “Heroic Age” of polar exploration.  Amundsen was born to take part.

Not so, Robert Falcon Scott.   A career officer with the British Royal Navy, Scott would take a different path to this story.

Now more than ever, Scott was eager to distinguish himself with an eye toward promotion, and the increase in income which came with it. 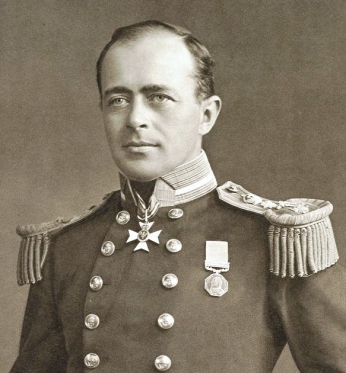 In the Royal Navy, limited opportunities for career advancement were eagerly sought after, by any number of ambitious officers.  Home on leave in 1899, Scott chanced once again to meet the now-knighted “Sir” Clements Markham, and learned of an impending RGS Antarctic expedition, aboard the barque-rigged auxiliary steamship, RRS Discovery.  What passed between the two went unrecorded but, a few days later, Scott showed up at the Markham residence, and volunteered to lead the expedition.

The Discovery expedition of 1901-’04 was one of science as well as exploration.  Despite a combined polar experience of near-zero, the fifty officers and men under Robert Falcon Scott made a number of important biological, zoological and geological findings, proving that the Antarctic continent was once, forested.  Though later criticized as clumsy and amateurish, a journey south in the direction of the pole discovered the polar plateau, establishing the southernmost record for its time at 82° 17′ S, only 530 miles short of the pole.

Discovery returned in September 1904, the expedition hailed by one writer as “one of the great polar journeys”, of its time.  Once an obscure naval officer, Scott now entered Edwardian society, and moved among the higher social and economic circles, of the day.

A brief but stormy relationship ensued with Kathleen Bruce, a sculptress who studied under Auguste Rodin, and counted among her personal friends, the likes of Pablo Picasso, Aleister Crowley and Isadora Duncan.  The couple was married on September 2, 1908 and the marriage produced one child, Peter Markham Scott, who went on to found the World Wide Fund for Nature (WWF).

The elder Scott would not live to see it.

The “Great Southern Journey” of Scott’s Discovery officer Ernest Shackleton, arrived at a point 112 miles short of the pole on January 9, 1909, providing Scott with the impetus for a second attempt, the following year.  Scott was still fundraising for the expedition when the old converted whaler Terra Nova departed Cardiff, in South Wales.  Scott joined the ship in South Africa and arrived in Melbourne Australia in October, 1910.

Meanwhile, and unbeknownst to Scott, Roald Amundsen was preparing for his own drive on the south pole, aboard the ship “Fram” (Forward).

It was in Melbourne that Scott received the telegram: “Beg leave to inform you Fram proceeding Antarctic Amundsen“.  Robert Falcon Scott now faced a race to the pole.

Unlike Amundsen who adopted the lighter fur-skins of the Inuit, the Scott expedition wore heavy wool clothing, depending on motorized and horse-drawn transport, and man-hauling sledges for the final drive across the polar plateau. Dog teams were expected to meet them only on the way out, on March 1.

Weak ponies, poorly acclimatized to the wretched conditions of Antarctica, slowed the depot-laying part of the Scott expedition.  Four horses died of cold or had to be shot, because they slowed the team.

Unlike the earlier attempt, Robert Falcon Scott made it to the pole this time, only to find that Amundsen’s Norwegian team had beat him there, by a mere five weeks. Over a hundred years later you can still feel anguish from the man’s diary: “The worst has happened…All the day dreams must go…Great God! This is an awful place”.

Defeated, the five-man Scott party turned and began the 800-mile, frozen slog back from the Pole on January 19, 1912.  Team member Edgar “Taff” Evans’ condition began to deteriorate as early as the 23rd. A bad fall on Beardmore Glacier left the man concussed on February 4, “dull and incapable”.  Another fall two weeks later, left Evans dead at the foot of the glacier.

Dog teams failed to materialize at the appointed time.  Within days, Titus himself was severely frostbitten, concerned that his incapacity would become a threat and a burden to the team. He left his tent for the last time and limped into a blizzard on March 17, saying “I am just going outside and may be some time”.  He never returned.

Noble as it was, Lawrence Oates’ suicide, came to naught.  The last three made their final camp on March 19, with 400 miles yet to go.   A howling blizzard descended on the tents the following day and lasted for days, as Scott, Henry “Birdie” Bowers and Dr. Edward Wilson wrote good-bye letters to mothers, wives, and others. 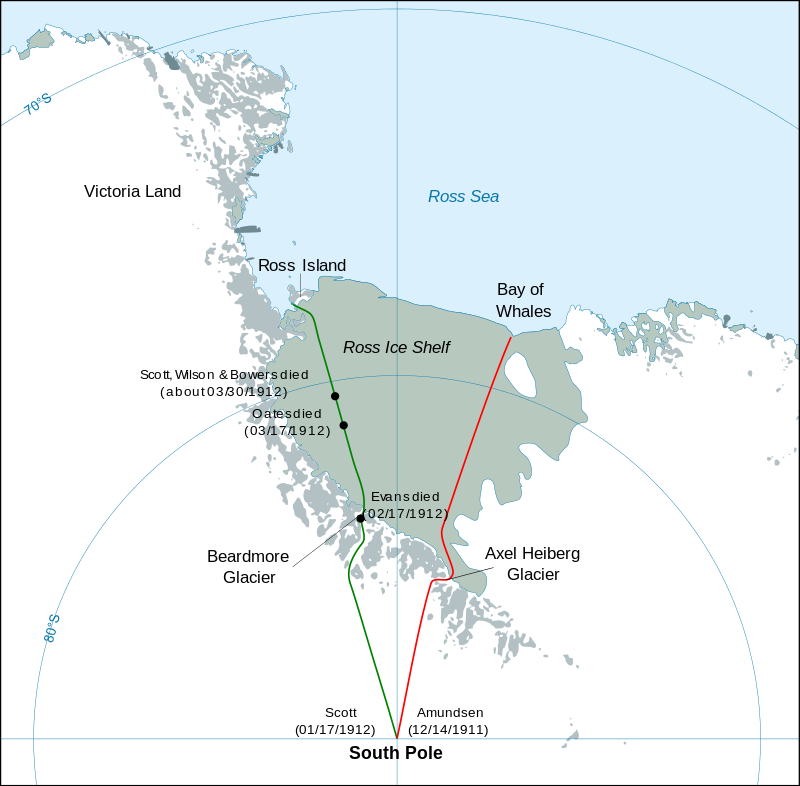 Starving and frostbitten, Robert Falcon Scott wrote to his diary in the final hours of his life “It seems a pity, but I do not think I can write more.” In his final entry, he worried about the financial burden on his family, and those of the doomed expedition: “Last entry.  For God’s sake look after our people”.

The lowest ground level temperature ever recorded was −128.6° Fahrenheit at the Soviet Vostok Antarctic Station, in 1983.  Meteorological conditions for those last days in the Scott camp, went undocumented.

The frozen corpses of Robert Falcon Scott and his comrades were found on November 12, 1912, that last diary entry dated March 29.  A high cairn of snow was erected over it all, that final camp becoming the three men’s tomb. Ship’s carpenters built a wooden cross, inscribing on it the names of those lost: Scott, Edward Wilson, Henry Bowers, Lawrence Oates and Edgar Evans. A line from Alfred Lord Tennyson’s poem, Ulysses, was carved into the cross:

It was eleven miles short of the next supply depot.

On hearing the fate of his rival, Roald Amundsen said “I would gladly forgo any honor or money if thereby I could have saved Scott his terrible death”.

A century later, ice and snow have covered the last camp of the southern party.  Pressed ever downward by the weight of snow and ice, their corpses are encased seventy-five-feet down in the Ross Ice Shelf and inching their way outward, expected to reach the Ross Sea sometime around 2276.  One day to break off and float away, at the heart of some unknown and nameless iceberg.