I’ve long believed that we can’t be participating citizens of a self-governing Republic, we can’t know where we want our nation to go, if we don’t understand where it’s been.  It’s one of the principle reasons for examining history.  It’s why I think something wonderful happened five years ago, and I don’t think many of us heard about it. 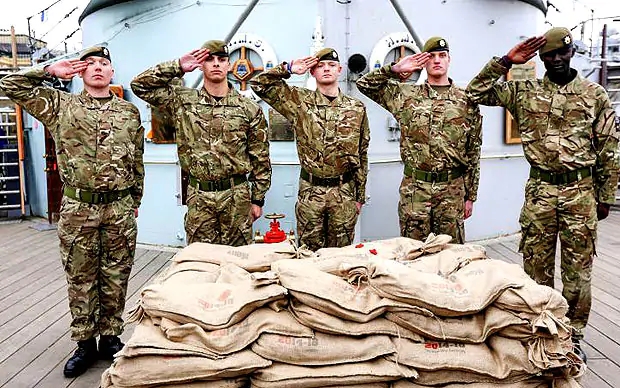 November 11, nineteen short days ago, marked the one-hundred year anniversary of the end of World War One.  Before they had numbers, this was “The Great War”.  The “War to end all Wars”.

There is barely a piece of 20th or 21st century history, which cannot be traced back to it.

International Communism was borne of the Great War, without which there would have been no cold war, no Korean War, no war in Vietnam. The killing fields of Cambodia would have remained mere rice fields.  The spiritual descendants of Chiang Kai-shek’s brand of capitalism would be running all of China, instead of only Taiwan. 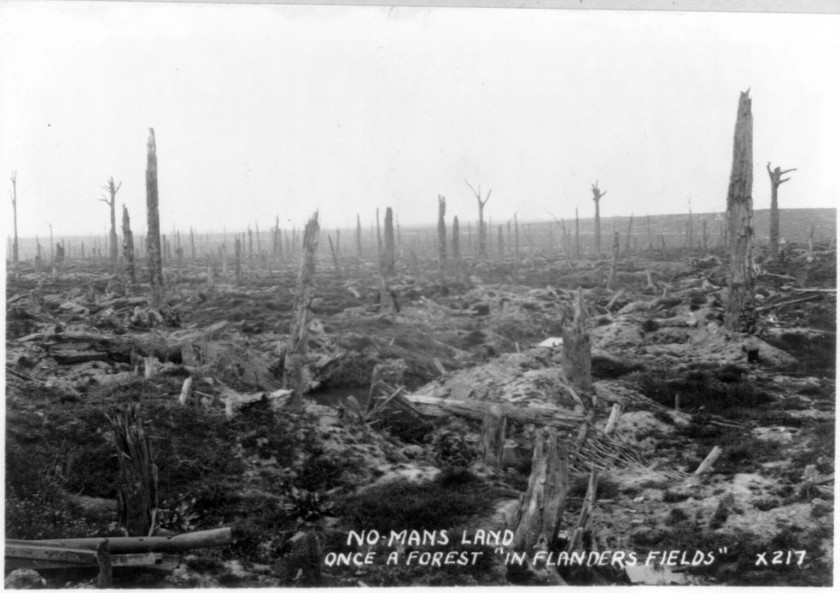 The current proportions of the Middle East arose from the Great War. While the region’s tribal alliances and religious strife is nothing new, those conditions would have taken a different form, had it not been for those boundaries.

World War II, an apocalypse which left more dead, wounded or missing than any conflict in world history, was little more than the Great War, part II. A Marshall of France, on reading the Versailles Treaty formally ending WWI, said “This isn’t peace. This is a cease-fire that will last for 20 years”.  He was off, by about 36 days.

I’ve long believed that we can’t be participating citizens of a self-governing Republic, we can’t know where we want our nation to go, if we don’t understand where it’s been.  It’s one of the principle reasons for examining history.  It’s why I think something wonderful happened five years ago, and I don’t think many of us heard about it.

Over the summer of 2013, more than 1,000 British and Belgian schoolchildren visited seventy battlefields of the Great War.  Ypres.  Passchendaele.  Verdun.  The Somme. This was a singular event.  Never before had the Commonwealth War Graves Commission permitted the excavation of these battlefields.

All over Northern France and Belgium, the region known as “Flanders”.  There these children collected samples of the sacred soil of those fields of conflict.

The soil from those battlefields was placed in 70 WWI-style burlap sandbags, each stenciled with a red poppy, where it came from, and the dates.  Those sandbags began their journey with a solemn Armistice Day ceremony at the Menin Gate of Ypres, that memorial to the 56,395 British and Commonwealth soldiers who fought and died on the Ypres salient of the Great War, and whose bodies were never found or identified.

The sacred soil of Flanders Fields transported to London aboard the Belgian Navy frigate Louisa Marie, and installed with great care at Wellington Barracks, the central London home of the Grenadier Guards, Coldstream Guards and Scots Guards.

There the soil of the Great War would nourish and support a garden, inscribed with the words of Doctor John McCrae’s famous poem, “In Flanders Fields”.  Ready for the following year, a solemn remembrance of the centenary of the War to end all Wars. 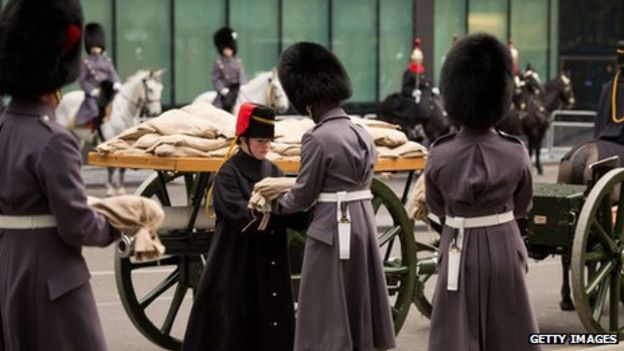 That day, December 1, 2013, was for the Flanders Fields Memorial Garden, the first full day of forever.  I cannot think of anything more fitting than that it was children, our future and posterity, who retrieved the sacred soil of Flanders and installed it in that garden.

It is now for that posterity to keep our history alive, and never to let it fade, into some sepia-toned and forgotten past.

The French staff formulated their battle plan, based on the assumption that it was impossible for the Viet Minh to place enough artillery on the surrounding high ground, due to the rugged terrain. Communist forces didn’t possess enough artillery to do serious damage anyway.  Or so they thought. 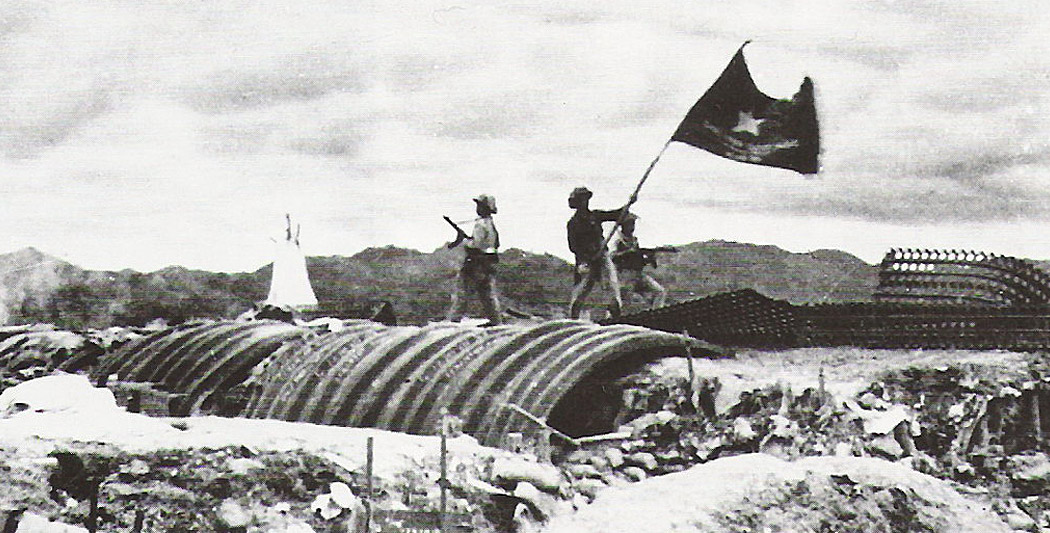 When we think of the French Republic, most of us envision a five-sided nation between Spain and Germany, located between the English Channel and the Mediterranean Sea. That would be right, but “la Métropole” or “Metropolitan France” today accounts for only about 82% of the landmass of la République Française. The overseas departments and territories which make up “la France d’outre-mer”, “Overseas France”, account for the rest.

That overseas percentage would have been higher in the mid-20th century, with many former colonial territories added in, among them Laos, Cambodia and Vietnam.

Japanese occupation of southeast Asia caused the Europeans to leave French Indochina during WWII. Within a year of re-occupation, the French faced virulent opposition from the Nationalist-Communist Viet Minh, led by Ho Chi Minh and Vo Nguyen Giap. Theirs was a low level, rural insurgency at first, later becoming a full-scale modern war when Chinese Communists entered the fray, in 1949.

What historians call the First Indochina War, many contemporaries called “la sale guerre”, or “dirty war”. The government forbade the use of metropolitan recruits, fearing that that would make the war more unpopular than it already was. Instead, French professional soldiers and units of the French Foreign Legion were augmented with colonial troops, including Moroccan, Algerian, Tunisian, Laotian, Cambodian, and Vietnamese ethnic minorities.

The war went poorly for the French government.  By 1952 it was looking for a way out. Premier René Mayer appointed Henri Navarre to take command of French Union Forces in May of that year, with a single order. Navarre was to create military conditions which would lead to an “honorable political solution”.

In November and December of the previous year, the French army had air lifted soldiers into a fortified position at Na San, adjacent to a key Viet Minh supply line to Laos. Superior French fire power, armor and air resources had driven Vo Nguyen Giap’s forces back with heavy losses, in what French planners called the “hérisson” or “hedgehog” strategy.

In June, Major General René Cogny proposed a “mooring point” at Dien Bien Phu, creating a lightly defended base from which to launch raids. Navarre wanted to replicate the Na San strategy, and ordered that Dien Bien Phu be taken and converted into a heavily fortified installation.

“Operation Castor” began on the 20th of November, when three parachute infantry battalions dropped into Dien Bien Phu. The operation was completed with minimal French casualties on November 30, as they continued to land supplies, troops, and engineering equipment into the isolated base.

Under the command of Colonel Christian de Castries, French forces built seven fortified positions to defend the base, each allegedly named after one of his mistresses. 10,800 French troops were committed, with another 16,000 in reserve. 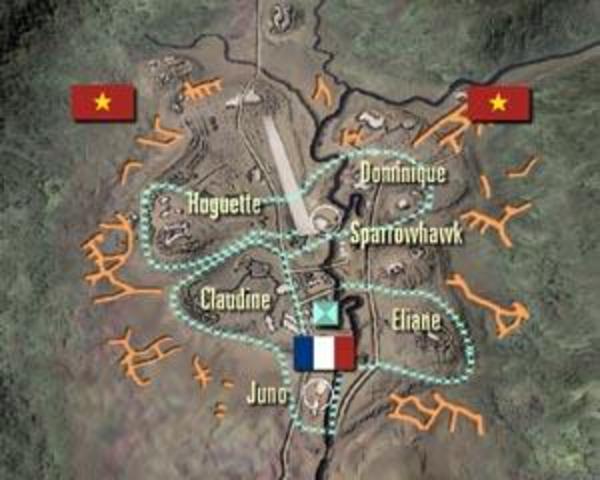 Vo believed he had made a serious mistake at Na San, rushing his troops in piecemeal against French defenses. This time, he carefully prepared his positions, moving 50,000 men into position around the valley, meticulously stockpiling ammunition and placing anti-aircraft and heavy artillery, with which he was well supplied.

The French staff formulated their battle plan, based on the assumption that it was impossible for the Viet Minh to place enough artillery on the surrounding high ground, due to the rugged terrain. Communist forces didn’t possess enough artillery to do serious damage anyway.  Or so they thought.

French officers quickly learned how mistaken they had been. The first sporadic artillery fire began on January 31, around the time when patrols discovered the enemy’s presence in every direction. Heavy artillery virtually ringed the valley in which they found themselves, and air support was quickly nullified by the enemy’s well placed anti-aircraft fire.

The Viet Minh assault began in earnest on March 13, when several outposts came under furious artillery barrage. Air support became next to impossible, and counter-battery fire was next to useless against Giap’s fortifications. Lieutenant Colonel Charles Piroth commanded the French artillery at Dien Bien Phu. He was a professional soldier and no lightweight, having had his arm amputated in 1946 with no anesthesia. When it became clear how wrong his assumptions had been, he circled the camp making apologies to his officers, returned to his tent, and killed himself with a hand grenade. 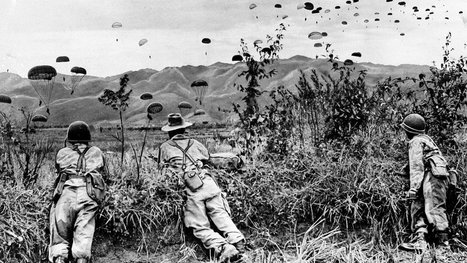 “Beatrice” was the first fire base to fall, then “Gabrielle” and “Anne-Marie”. Viet Minh controlled 90% of the airfield by the 22nd of April, making even parachute drops next to impossible. On May 7, Vo ordered an all-out assault of 25,000 troops against the 3,000 remaining in garrison. By nightfall it was over.  The last words from the last radio man were “The enemy has overrun us. We are blowing up everything. Vive la France!”

Military historian Martin Windrow wrote that Dien Bien Phu was “the first time that a non-European colonial independence movement had evolved through all the stages from guerrilla bands to a conventionally organized and equipped army able to defeat a modern Western occupier in pitched battle”.

The Geneva conference opened the following day, resulting in a Vietnam partitioned into two parts. In the north was the “Democratic Republic of Vietnam” administered by the communists, and the State of Vietnam in the south, under Emperor Bao Dai and Prime Minister Ngo Dinh Diem. The North was supported by both the People’s Republic of China and the Soviet Union, and continued to terrorize patriots in the north and the south. 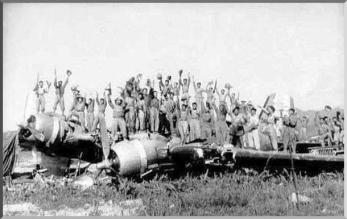 American support for the south increased as the French withdrew theirs.  By the late 1950s, the United States were sending technical and financial aid in expectation of social and land reform. By 1960, the National Front for the Liberation of South Vietnam (NLF, or “Viet Cong”) had taken to murdering Diem supported village leaders.  President John Fitzgerald Kennedy responded by sending 1,364 American advisers into South Vietnam, in 1961.

The next war in Indochina, had begun.