242 years ago today, three thousand American Patriots fought a desperate and losing battle against 8,000 British forces and their Hessian allies for Washington Heights, in New York.  1776 miles away at that very moment, little Sint Eustatius had just become the first nation in history, to recognize American independence.

Sint Eustatius, known to locals as “Statia”, is a Caribbean island of 8.1 sq. miles in the northeastern Caribbean, located between St. Kitts and Puerto Rico.

Throughout the 18th century, Sint Eustatius had close ties with North America, and became wealthy from the trade in a variety of goods.  Sugar, molasses, gin, rum and cotton were only a few of the goods shipped from, or through, Sint Eustatius. Colonial ports from Maine to Virginia shipped products to the island in return, including barrel staves, beans, flour, cod, horses, lumber and tobacco.

At its height, the island was handling over 3,000 vessels per year, making St. Eustatius the “Golden Rock” of the Caribbean.

As a Dutch Colony, Sint Eustatius was required to remain neutral during the American Revolution. The government in Holland warned Governor Johannes de Graaff to stay away from the American “rebels” fighting for independence, but de Graaff didn’t see it that way.  The trade in powder, ammunition and arms continued throughout the Revolutionary period, with covert support smuggled in from Spain, France and dissident interests in Holland.

For a time, little Sint Eustatius was the only link between Europe, and the American colonies.

On November 16, 1776, the Brig Andrew Doria sailed into Sint Eustatius’ principle anchorage in Oranje Bay, flying the Continental Colors, the first national flag of the fledgling United States.  The brig, under command of Captain Isaiah Robinson, was there to obtain munitions and military supplies. Andrew Doria also carried a precious cargo, a copy of the Declaration of Independence.

This was the Americans’ second attempt to send the Declaration to their Dutch associates, the first having been captured on the way to Holland.  Wrapped in papers containing some obscure espionage code, British investigators labored in vain to unlock this strange new cipher. They could have spared themselves the effort.  That first copy of the declaration was sheathed in notes written in Yiddish, personal greetings to some of the Jewish merchants of Holland.

It was traditional in those days, that vessels approaching a foreign harbor fire a gun salute upon entering. Captain Robinson fired a 13-gun volley on entering the bay, one for each of the thirteen American colonies.

Tradition dictated that a salute be fired in return, typically two guns fewer than that discharged by the incoming vessel, but such an act carried meaning.  Such a return salute was an act of overt recognition, that a sovereign state had entered the harbor. Such a salute would amount to formal recognition of the thirteen American colonies, as free and independent states.

The commander at Fort Oranje, overlooking the anchorage, didn’t know how to respond. Governor de Graaff ordered an 11-gun return salute fired from the guns of Fort Oranje.

At the time, none could have known:  242 years ago today, three thousand American Patriots fought a desperate and losing battle against 8,000 British forces and their Hessian allies for Washington Heights, in New York.  1776 miles away at that very moment, little Sint Eustatius had just become the first nation in history, to recognize American independence.

Playing the role of the young tattle-tale to an older sibling, nearby Saint Kitts immediately dispatched a vessel to England, to inform the British government of the event. The British were furious, of course. The trade between St. Eustatius and the American Colonies became the principal cause of the fourth Anglo-Dutch war, begun on December 12, 1780.

Admiral George Bridges Rodney forced the surrender of Sint Eustatius the following February, complaining that “This rock, of only six miles in length and three in breadth, has done England more harm than all the arms of her most potent enemies, and alone supported the infamous rebellion. When I leave the island of St. Eustatius, it will be as barren a rock as the day it erupted from the sea. Instead of one of the greatest emporiums on earth, it will be a mere desert and known only by report.” 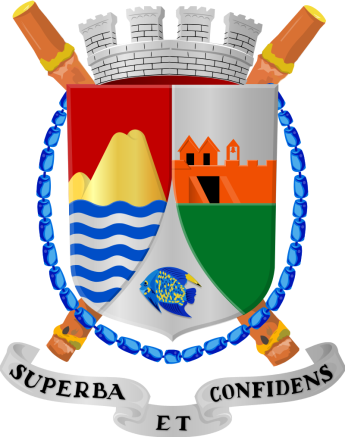 Admiral Rodney pretty much had his way. The census of 1790 shows 8,124 on the Dutch island nation. In 1950, the population stood at only 790. It would take 150 years from Rodney’s departure, before tourism even began to restore the economic well-being of the tiny island.

Today, Sint Eustatius celebrates the 16th of November as “Statia America Day”, in recognition of that first salute.

An official coat of arms was designed by Sint Eustatius’ Director of Monuments Walter Hellebrand, and adopted on this day in 2004. On the left is a Golden Rock, in memory of the trade that made the island rich. On the right is Fort Oranje, Sint Eustatius’ most important landmark. The angel fish of this pristine diving destination is at the bottom, symbolizing the island’s future. Below is the Latin motto, “SUPERBA ET CONFIDENS”.  Proud and Confident.