In 1941, a Commerce Department survey demonstrated little difference in Christmas sales between those states observing Franksgiving, and those observing the more traditional date. To this day, the years 1939, ’40 and ’41 remain the only outliers, outside the fourth-Thursday tradition. 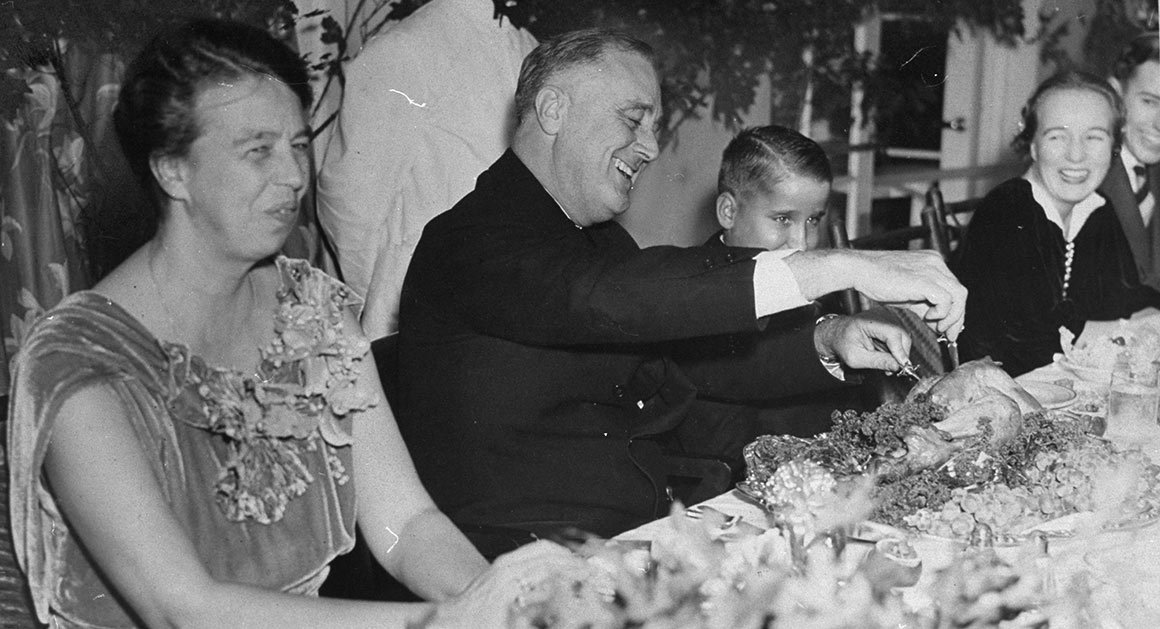 The first Autumn feast of Thanksgiving dates well before the European settlement of North America. 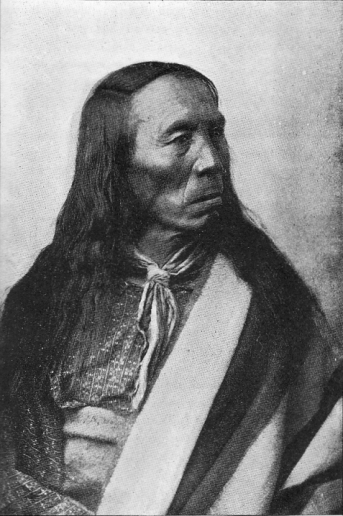 Historian Michael Gannon writes that the “real first Thanksgiving” in America took place in 1565, when Pedro Menéndez de Avilés landed in modern-day Florida, and “had the Indians fed and then dined himself.” Likely, it was salt-pork stew with garbanzo beans. Yum.

According to the Library of Congress, the English colony of Popham in present-day Maine held a “harvest feast and prayer meeting” with the Abenaki people in 1607, twenty-four years before that “first Thanksgiving” at Plymouth.

George Washington proclaimed the first Presidential National day of Thanksgiving on November 26, 1783, “to recommend to the People of the United States a day of public thanksgiving and prayer to be observed by acknowledging with grateful hearts the many signal favors of Almighty God especially by affording them an opportunity peaceably to establish a form of government for their safety and happiness“.

So much for separation of Church and state.

President Abraham Lincoln followed suit in 1863, declaring a general day of Thanksgiving to be observed on the last Thursday of November.  The date seemed to work out OK and the tradition stuck, until 1939.

Roughly two in every seven Novembers, contain an extra Thursday.  November 1939, was one of them. 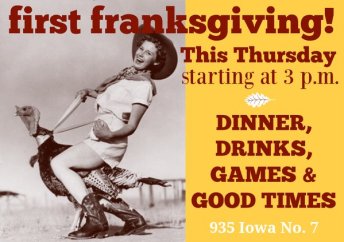 In those days, it was considered poor form for retailers to put up Christmas displays or run Christmas sales, before Thanksgiving.  Lew Hahn, General Manager of the Retail Dry Goods Association, was afraid that extra week was going to cut into Christmas sales.

Ten years into the Great Depression with no end in sight, the Federal government was afraid of the same thing. By late August, President Franklin Delano Roosevelt decided to deviate from the customary last Thursday, and declared the fourth Thursday, November 23, to be a national day of prayer and thanksgiving.

Opposition to the plan was quick in forming.  Alf Landon, Roosevelt’s Republican challenger in the earlier election, complained of Roosevelt’s impulsiveness, and resulting confusion.  “More time should have been taken working it out” Landon said, “instead of springing it upon an unprepared country with the omnipotence of a Hitler.” 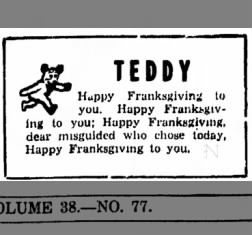 In Plymouth Massachusetts, self-described home of the “first Thanksgiving”, Chairman of the Board of Selectmen James Frasier, “heartily disapproved”.

The short-notice change in schedule disrupted vacation plans for millions of Americans, to say nothing of traditional Thanksgiving day football rivalries between high school and college teams, across the nation.

Unsurprisingly, support for Roosevelt’s plan split across ideological lines.  A late 1939 Gallup poll reported Democrats favoring the move by a 52% to 48% majority, with Republicans opposing it by 79% to 21%.

Such proclamations represent little more than the “’moral authority” of the Presidency, and states are free to do as they please.  Twenty-three states and the District of Columbia observed Thanksgiving day on the non-traditional date, and twenty-two kept Thanksgiving on the 30th.  Colorado, Mississippi and Texas, did both.

The next two years, thirty-two states and the District of Columbia celebrated what came to be called “Franksgiving” on the third Thursday of the month, while the remainder observed a more traditional “Republican Thanksgiving” on the last. 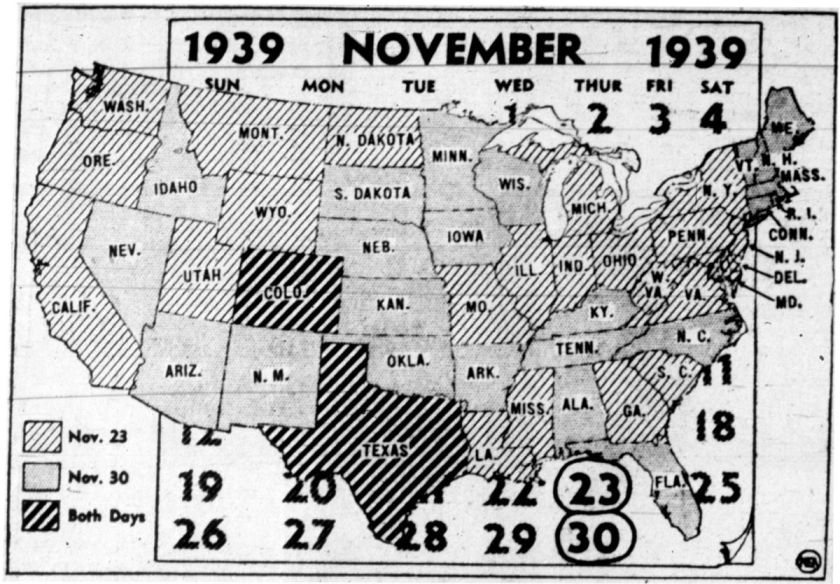 In 1941, a Commerce Department survey demonstrated little difference in Christmas sales between those states observing Franksgiving, and those observing the more traditional date.  A joint resolution of Congress declared the fourth Thursday beginning the following year to be a national day of Thanksgiving.  President Roosevelt signed the measure into law on November 26.

Interestingly, the phrase “Thanksgiving Day” had appeared only once in the 20th century prior to the 1941 resolution, that in President Calvin Coolidge’s first of six such proclamations.

Most state legislatures followed suit with the Federal fourth-Thursday approach, but not all.  In 1945, the next year with five November Thursdays, Arkansas, Florida, Georgia, Idaho, Nebraska, Tennessee, Texas, and Virginia reverted to the last Thursday.  Texas held out the longest, celebrating its fifth-Thursday Thanksgiving for the last time in 1956.

To this day, the years 1939, ’40 and ’41 remain the only outliers, outside the fourth-Thursday tradition.

Popular comedians of the day got a lot of laughs out of it, including Burns & Allen and Jack Benny.  One 1940 Warner Brothers cartoon shows two Thanksgivings, one “for Democrats” and one a week later “for Republicans.”

The Three Stooges short film of the same year has Moe questioning Curly, why he put the fourth of July in October.  “You never can tell”, he replies.  “Look what they did to Thanksgiving!”

Joe Toye, the “Easy Company” character in the 2001 HBO miniseries “A Band of Brothers”, may have had the last word on Franksgiving.  Explaining his plan to get the war over quickly, the paratrooper quips “Hitler gets one of these [knives] right across the windpipe, Roosevelt changes Thanksgiving to Joe Toye Day, [and] pays me ten grand a year for the rest of my f*****g life.”