My favorite among the classified ads has to be the “Flammenwerfer” – Flame Thrower. “Guaranteed absolutely harmless.” “Instructive – Amusing”. 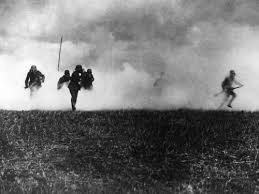 As chief of the Imperial German general staff from 1891-1905, German Field Marshal Alfred von Schlieffen devised the strategic roadmap by which Germany prosecuted the first world war. The “Schlieffen Plan” could be likened to a bar fight, where a fighter (Germany) had to take out one guy fast (France), before turning and facing his buddy (Imperial Russia). Of infinite importance to Schlieffen’s plan was the westward sweep through France, rolling the country into a ball on a timetable before his armies could turn east to face the “Russian Steamroller”. “When you march into France”, Schlieffen had said, “let the last man on the right brush the Channel with his sleeve.”

Field Marshall Helmuth von Moltke once said “No battle plan ever survives contact with the enemy”.  So it was in the tiny Belgian city where German plans were broken, on the road to Dunkirk. Native Dutch speakers called it Leper, today we know it as Ypres (Ee-press), since the battle maps of the time were drawn up in French. The Tommys of the British Expeditionary Force (BEF), called the place “Wipers”.

What had hitherto been a war of movement ground to a halt in the apocalyptic fighting around Ypres, in October-November, 1914. 104,920 on all sides were killed, wounded or missing, around a city roughly the size of my little town of Falmouth, on Cape Cod. 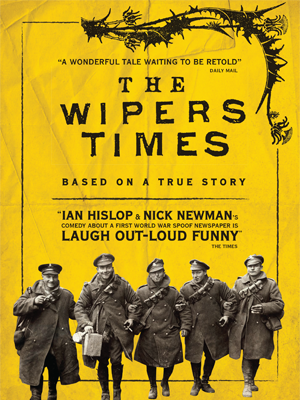 The second Battle of Ypres began with a new and terrifying weapon, on April 22, 1915. German troops placed 5,730 gas cylinders weighing 90 pounds apiece, along a four mile front. Allied troops must have looked on in wonder, as that vast yellow-green carpet crept toward their lines. Chlorine gas forms hypochlorous acid when combined with water, destroying the moist tissues of the lungs and eyes. Heavier than air, the stuff crept along the ground and poured into the trenches, forcing troops out into heavy German fire. 6,000 casualties were sustained in the gas attack alone, opening a four mile gap in the allied line. Thousands retched and coughed out their last breath, as others tossed their equipment and ran in terror.

The third Battle of Ypres would begin in July of 1917, lasting almost until the end of the war. 3rd Ypres would result in 570,000 losses on all sides, but in early 1916, that was all part of some unknown and terrible future.

It’s hard to imagine anything remotely humorous coming out of the horrors of Ypres, but such a thing became possible in the early months of 1916.

The “Sherwood Foresters” were line infantry Regiments of the British Army, stationed at the front lines of the Ypres salient. Coming across a printing press, a sergeant who had been a printer in peacetime got the thing going. They began to print a trench magazine, the first published on February 12. The paper included poems and reflections, “adverts” and plenty of dark humor.  Written for fellow soldiers, not civilians, some in-jokes are so obscure that their meaning is lost to the modern reader. Others are clearly understandable, even 101 years into their future.

Richly typeset advertisements for “Music Hall Extravaganzas” include “Tickling Fritz” by the P.B.I. (Poor Bloody Infantry) Film Co. of the United Kingdom and Canada, advising the enthusiast to “Book Early”. There were Real Estate ads for property in no-man’s land. “BUILD THAT HOUSE ON HILL 60. BRIGHT-BREEZY-&-INVIGORATING. COMMANDS AN EXCELLENT VIEW OF HISTORIC TOWN OF YPRES”. Another one read “FOR SALE, THE SALIENT ESTATE – COMPLETE IN EVERY DETAIL! UNDERGROUND RESIDENCES READY FOR HABITATION. Splendid Motoring Estate! Shooting Perfect !! Fishing Good!!!”

There were news features, this one of a bungled trench raid: “”…They climbed into the trench and surprised the sentry, but unfortunately the revolver which was held to his head missed fire. Attempts were made to throttle him quietly, but he succeeded in raising the alarm, and had to be killed.” editor’s note, “This we consider real bad luck for the sentry after the previous heroic efforts to keep him alive””. 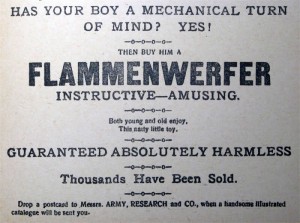 There were weather reports, laying odds on the forecast. “5 to 1 Mist, 11 to 2 East Wind or Frost, 8 to 1 Chlorine”. My favorite among the classified ads has to be the “Flammenwerfer” – Flame Thrower. “Guaranteed absolutely harmless.”  “Instructive – Amusing”.

It turns out that units of all sizes, from individual companies to army corps, lightened their load with some kind of unit journal in WWI.

The Wipers Times ran through the end of the war, with the exception of the “Operation Michael” period, the last gasp German Western Front offensive of 1918. The final edition, titled “The Better Times”, was published in December 1918, just short of two months after the armistice.   The banner read “Xmas, Peace and Final Number.” 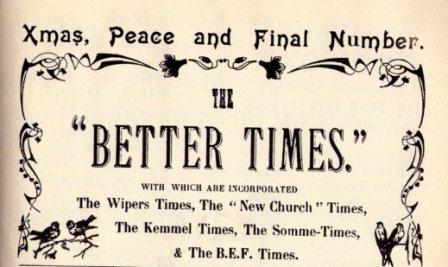