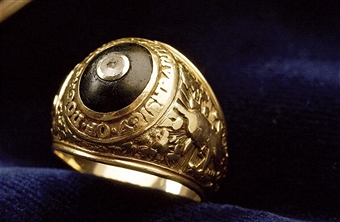 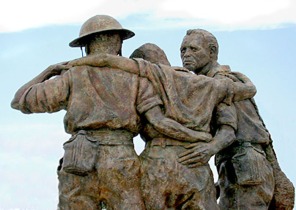 April 3, 1946 Bataan Death March – The POW received his prison number…the same he’d worn playing fullback, for Notre Dame.  #58. That was when he knew he’d make it

April 5, 1761 Midnight Ride – “Listen my children and you shall hear”… the story of the female Paul Revere

April 6, 1917 Safe for Democracy – In the end, the German response to anticipated US action, brought about the very action it was trying to avoid

At that moment a roar went up from the crowd, as a streaker jumped out of the stands and onto the field. That’s when he lost it.

The 1974 season opened on the road for the San Diego Padres, the series ending in a humiliating, 25-2 blowout at Dodger’s Stadium.

Padres’ new owner and McDonald’s founder Ray Kroc was anything but pleased with the 0-3 start, saying “They’re snake-bit, and they’ve got the yips. They’re overanxious, trying too hard, too tense”. Kroc was positive, though, at the home opener against the Houston Astros.  Stepping up to the field microphone, Kroc said to the crowd of 39,083 at San Diego Stadium, “With your help and God’s help, we’ll give ‘em hell tonight.”

The home opener at Jack Murphy (now Qualcomm) Stadium on April 9 was no better, ending in a 9 to 5 loss.  In the middle of the eighth, the Padres were well on their way to 0 and 4, when Ray Kroc opened the door of the public address booth and told announcer John DeMott he had something to say.

Kroc had bought the club only two months earlier, when San Diego was in danger of

losing its National League team to Washington, DC.  Only moments before,  Padres’ President Buzzie Bavasi had to leave Kroc’s side to investigate concession area water in the clubhouse, when a leak was “promoted” to a flood.

Kroc had to have been cranky when he took the mic in the first place, but it quickly got worse.  “Ladies and gentlemen,” he began, “I suffer with you.”  At that moment a roar went up from the crowd, as a streaker jumped out of the stands and onto the field.

That’s when he lost it.  “Get him out of here. Throw him in jail” Kroc shouted.  Then he continued.  “I have good news and bad news. The good news is that the Dodgers drew 31,000 for their opener and we’ve drawn 39,000 for ours. The bad news is that this is the most stupid baseball playing I’ve ever seen”.

It was a bad idea.  Player representative Willie McCovey spoke for the club. “I wish Mr. Kroc hadn’t done that. I’ve never heard anything like that in my 19 years in baseball. None of us likes being called stupid. We’re pros and we’re doing the best we can. His words will ring in the players’ ears for a long time.”

Players were so angry they threatened to boycott the next game.  San Diego dentist Steve Arlin was the losing pitcher that night.  “We were all embarrassed by it,” he said. “We weren’t playing well, but we didn’t need to be reminded”.

Even opposing players jumped into the fray.  Houston player rep Denis Menke said, “That was in bad taste.”  Menke went on to protest Kroc’s comments to Marvin Miller, head of the players’ union.

Miller thought Kroc’s actions were unacceptable, too.  “Imagine what would have happened if a player, after being taken out of a game, made an announcement over the P.A. that his manager was stupid. The player would be fined or suspended. I see a direct parallel in the Kroc case.”

Astros’ third baseman Doug Rader said, “He thinks he’s in a sales convention dealing with a bunch of short-order cooks. That’s not the way to go about getting a winner. Somebody ought to sit him down and straighten him out.” Within two weeks Rader had received so many angry calls from short order cooks, that he had to make a public apology.

Buzzie Bavasi did the most to defuse the situation.  Taking a cue from Rader’s comments, Bavasi designated the next game in the Houston series “Short Order Cook’s Night”.  Any Padres fan who came wearing a chef’s hat, would be admitted into the game for free.  Rader, the Astro’s team captain, took the lineup card to home plate wearing an apron with a chef’s hat, slipping the card off a skillet with a spatula and handing it over to the home plate umpire, like a pancake.

Baseball Commissioner Bowie Kuhn later forced Kroc to make a public apology, but Sporting News columnist Melvin Durslag wasn’t buying it. “The reason (he’d never seen such stupid baseball playing) was largely due to his inexperience at watching baseball.  He knows as much about the sport as Willie McCovey knows about an Egg McMuffin.”

San Diego went on to lose 102 games that year, 42 more than archrival LA Dodgers.  The season wasn’t halfway over, when the new owner wondered what he’d gotten himself into.  I bought the team to have some fun”, Kroc said.  “But it is proving to be about as enjoyable as a wake.  Your own”.