The elderly owner of Macy’s Department Stores Isidor Straus was offered a seat with his wife Ida, on account of his age. Strauss refused any special consideration and Ida refused to leave his side. The couple went down with the ship.

The maiden voyage of the largest ship afloat left the port of Southampton, England On April 10, 1912, carrying 2,224 passengers and crew.  An accident was narrowly averted only minutes later, as Titanic passed the moored liners SS City of New York and Oceanic.

Both smaller ships lifted in the bow wave formed by Titanic’s passing, then dropped into the trough. New York’s mooring cables snapped, swinging her around stern-first.  Collision was averted by a bare 4 feet as the panicked crew of the tugboat Vulcan struggled to bring New York under tow.

The Southampton-to-New York run made stops at Cherbourg, France and Queenstown Ireland, to pick up passengers before the Atlantic crossing.  Titanic stoker John Coffey jumped ship in Ireland, hiding under a pile of mail bags.  The Queenstown native may have had a premonition as he claimed, or maybe he just wanted to go home.  Be that as it may, subsequent events may have made him the luckiest man on the cruise.

By the evening of the 14th, Titanic was 400 miles off the coast of Newfoundland, conditions clear, calm and cold.  There were warnings of drifting ice from other ships in the area, but the ship continued to steam at full speed.  It was generally believed that ice posed little danger to large vessels at this time, Captain Edward Smith opined that he “[couldn’t] imagine any condition which would cause a ship to founder.  Modern shipbuilding has gone beyond that.”

Lookout Frederick Fleet alerted the bridge of an iceberg dead ahead at 11:40pm. First Officer William Murdoch ordered the engines put in reverse, veering the ship to the left.  Lookouts were relieved, thinking that collision had been averted.  Below the surface, the starboard side of Titanic ground into the iceberg, opening a gash the length of a football field.  The ship had been designed to withstand the flooding of four watertight compartments.  The iceberg had opened five.  As Titanic began to lower at the bow, it soon became clear that the ship was doomed.

Those aboard were poorly prepared for such an emergency. The ship was built for 64 wooden lifeboats, enough for 4,000, however the White Star Liner carried only 16 wooden lifeboats and four collapsibles. Regulations then in effect required enough room for 990 people. Titanic carried enough to accommodate 1,178.

As it was there was room for over half of those on board, provided that each boat was filled to capacity. The crew, however, hadn’t been adequately trained in evacuation.

The “women and children first” protocol was generally followed, sometimes to the exclusion of all others.  Ship’s officers didn’t know how many could safely board the lifeboats, and many were launched barely half-full. The first lifeboat in the water, rated at 65 passengers, launched with only 28 aboard.

3rd class passenger Bertram Dean and his wife Georgette had decided to leave the UK and emigrate to the United States.  Mr. Dean planned to become a partner in a tobacco store, owned by a cousin in Wichita.   Down below, Bert Dean was among the first to hear the collision.  After inspecting the damage, Dean told his wife to dress the children, two-year old Bertram and two-month old Millvina, the youngest passenger on board.     Georgette and the two kids were placed on lifeboat #10, the first to escape.  Most of the male passengers and crew were left aboard, even as lifeboats launched half empty. 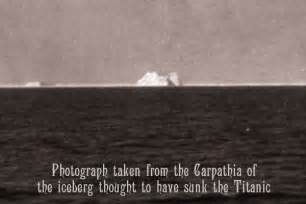 J. Bruce Ismay, CEO of White Star Lines, helped to load some of the boats. Looking about and seeing no women or children in the vicinity, only then did he step onto a lowering collapsible, but he never lived down having survived a disaster in which so many others perished.

Titanic chief architect Thomas Andrews was last seen in the First Class smoking room, staring blankly at a painting of the ship.  John Jacob Astor IV, the wealthiest passenger onboard, was traveling with his young wife Madeleine Talmadge Force, 29 years his junior.  Placing her on a lifeboat, Astor asked if he could join her, explaining that she was pregnant.  All that money didn’t help him, Astor was refused.  All he could do was kiss his young wife goodbye as the boat lowered out of sight.

The elderly owner of Macy’s Department Stores Isidor Straus was offered a seat with his wife Ida, on account of his age.  Strauss refused any special consideration and Ida refused to leave his side.  The couple went down with the ship, as did Benjamin Guggenheim and his valet, who returned to their rooms and changed into Tuxedos.  Emerging on deck, the wealthy industrialist declared, “We are dressed in our best and are prepared to go down like gentlemen”.

The stories that will never be told, are those of the 700 or so 3rd class passengers below decks.  Disoriented, terrified and trapped below decks, one by one they spent their last moments gasping in shrinking pockets of air, as frigid water swirled like class V rapids through the pitch black interior of the ship.

Distress signals were sent by wireless and lamp, but none of the ships responding were close enough to effect the outcome. The Californian, six miles to the north, was close enough to see distress rockets, but crew members thought the liner was having a party.

Two hours and 40 minutes after striking the iceberg, Titanic went up by the stern.  The forward deck dipped underwater as seawater poured in through open hatches and grates.  The immense strain on the keel split the ship in two between the third and fourth funnels, as the unsupported stern rose out of the water.  Propellers exposed, the stern remained afloat for a few minutes longer, rising to a nearly vertical angle with hundreds of people still clinging to it. The last piece sank out of sight at 2:20am, plunging passengers and crew into 28°F water.  Most of them died within minutes of hypothermia, cardiac arrest, or drowning. Lifeboats had room for almost 500 more, but only 13 were pulled from the water. 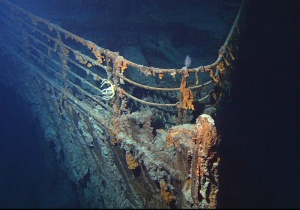 RMS Carpathia arrived on the scene around 4am, in response to Titanic’s distress calls.  Originally bound for Austria-Hungary, Carpathia diverted to New York with survivors.  A crowd of 40,000 awaited the arrival of 705 survivors on the 18th, despite a cold, driving rain.  It would take four full days to compile and release the full list of casualties.

Millvina Dean, once the youngest survivor of the Titanic disaster, died 97 years later, the last survivor of the sinking.  The remains of her father lie with the ship on which he perished, 12,415 feet beneath the surface of the north Atlantic.