The loss of Constantinople severed trade routes with Asia, forcing European powers to seek out water routes. Forty years later, Ferdinand and Isabella would discuss such a voyage of exploration with the Italian navigator, Christopher Columbus.

Founded by Byzas, son of the Greek King Nisos circa 657BC, the earliest days of Byzantium are clouded by legend.  Located on the easternmost peninsula where Europe becomes Asia, the city is surrounded on three sides, by water.

Besieged and all but destroyed by Rome in 196AD, the city soon regained the wealth and status it had formerly enjoyed as a center of trade.  The Roman Emperor Constantine established a second residence at Byzantium in 330, which was later renamed Constantinople, in his honor.  What had been a fishing village a thousand years earlier was now the seat of the Eastern Roman Empire, and would remain so for another thousand years.

Emperor Theodosius built a set of walls around the landward side of the city in the 5th century.  Avars, Arabs, Rus and Bulgars would all come up against the Theodosian Walls, which were all but impregnable to the siege apparatus of the era.  Until the age of gunpowder.

21-year-old Mehmed II began the final siege of Constantinople on April 6, 1453.  Commanding 120,000 attackers with an estimated 126 ships, Ottoman forces faced 7,000 to 12,000 Christian defenders with 26 ships, defending almost 3½ miles of land wall and another 9 miles of sea wall facing the Sea of Marmara and the Golden Horn.

Byzantine commander Constantine XI sent out a plea for reinforcements to Pope Nicholas V, who agreed to seek help despite centuries of animosity between the Eastern and Western Churches.   France and England were enmeshed in a hundred-years’ war at the time, Spain had a Reconquista to tend to.  The German Principalities were fighting each other.  No significant assistance ever appeared.

Giovanni Giustiniani arrived with 700 Genoese and Greek soldiers in January 1453, and was placed in command of the land walls.  Three Genoese galleys and a Byzantine blockade runner fought their way through the Ottoman blockading fleet on April 20th.  There would be no more help after that.

On land, Mehmed’s forces encircled the network of trenches, parapets and walls which made up the Theodosian defenses. At sea, he placed his forces on either side of the Bosporus, effectively cutting off the Black Sea and encircling the city on three sides.

A huge chain across the northern harbor, the “Golden Horn”, was all that kept Constantinople open on that side.

Mehmed placed his cannon into positions facing the wall. The largest, the monster “Basilica” was 27′ long, weighed 18 tons, and required a team of 60 oxen and 400 men to move it. It had a diameter of 30″, large enough for a grown man to crawl inside.  Its 150lb powder charge was capable of hurling a half-ton stone ball a distance of over a mile. While the weapon did catastrophic damage to the city walls, it took over three hours to reset after firing, and frantic efforts by the defenders were able to repair much of the damage between shots. 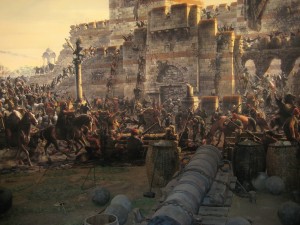 Serbian Sappers dug tunnels under the city, intending to undermine and blow out the walls, but Christian counter-miners broke into the tunnels and attacked them with swords, axes and Greek fire, an early form of napalm.

Unable to breach the chain, Mehmed ordered his ships portaged across dry land on greased logs, enabling them to enter the harbor and attack via the Golden Horn.  Burning vessels called “fire ships” were launched against them without success, requiring Constantine to spread out his already thin forces to defend multiple sides.

Holding a council of war with his advisors on May 26th, Mehmed ordered a massive assault carried out on the night of the 28th-29th, after a period of rest and prayer.

These were the cannon fodder, their purpose to wear down the defenders in preparation for attacks by professional soldiers, the Bashi-Bazouks.  Then came the Janissaries, Christian slave warriors raised from childhood to be the elite of the Ottoman army,   Attackers stormed the walls by the tens of thousands, while Ottoman ships pounded the city from the harbor.

Christian defenses finally began to falter, as Giustiniani was badly wounded and taken to the rear. Constantine too was under heavy pressure, leading the defense of the Lycus Valley to the south. When Ottomans found the Kerkoporta gate to the north open, they surged into the city, opening additional gates.  Fanning out, Ottoman soldiers moved through Constantinople, killing at will.

When Emperor Justinian finished construction in 537, the Hagia Sofia was the largest Christian cathedral in the world, remaining so for almost 1,000 years. Now Christian civilians in their thousands fled to the massive dome, barricading themselves inside where they prayed.

The Venetian surgeon Nicolò Barbaro wrote that “all through the day the Turks made a great slaughter of Christians through the city”.  At last, the massive bronze doors of the Hagia Sofia were breached, and the Turks began to divide up civilians according to their value at the slave market. Thousands of civilians were killed and 30,000 either enslaved or deported.

In the weeks that followed, Pope Nicholas V called for an immediate crusade to recover the city, but none stepped forward to lead the effort. It was a turning point in Western history.  Many see the Fall of Constantinople as the end of the Middle Ages and the beginning of the Renaissance. The loss of Constantinople severed European trade routes with Asia, forcing European powers to seek out water routes.

Forty years later, Ferdinand and Isabella would discuss such a voyage of exploration with the Italian navigator, Christopher Columbus.

Christian artifacts and artworks were removed or plastered over as churches were converted into mosques.  Mehmed II became “Mehmed the Conqueror”, his greatest conquest “Kostantiniyye”, the name morphing to “Islambol” by the 18th century, meaning “City of Islam” or “Full of Islam”.  Today, the former seat of the Byzantine Empire is the 7th largest city on the planet, by population.  Istanbul.