Painfully aware of the overwhelming productive capacity of the American economy, Yamamoto sought to neuter the US High Seas fleet in the Pacific, while simultaneously striking at the oil and rubber rich resources of Southeast Asia

Isoroku Takano was born in Niigata, the son of a middle-ranked samurai of the Nagaoka Domain. His first name “Isoroku”, translating as “56”, refers to his father’s age at the birth of his son. At this time, it was common practice that samurai families without sons would “adopt” suitable young men, in order to carry on the family name, rank, and the income that came with it. The young man so adopted would carry the family name.  So it was that Isoroku Takano became Isoroku Yamamoto in 1916, at the age of 32.

After graduating from the Imperial Japanese Naval Academy, Yamamoto went on to serve in the Russo-Japanese war of 1904, later returning to the Navy Staff College and emerging as Lieutenant Commander in 1916. He attended Harvard University from 1919-1921, learning fluent English. A later tour of duty in the US enabled him to travel extensively, and to study American customs and business practices.

Like most of the Japanese Navy establishment, Yamamoto promoted a strong Naval policy, at odds with the far more aggressive Army establishment. For those officers, particularly those of the Kwantung army, the Navy existed only to ferry invasion forces about the globe.

China. As Deputy Navy Minister, it was Yamamoto who apologized to Ambassador Joseph Grew, following the “accidental” bombing of the USS Panay in 1937. Even when he was the target of assassination threats by pro-war militarists, Yamamoto still opposed the attack on Pearl Harbor, which he believed would “awaken a sleeping giant and fill him with a terrible resolve”.

Yamamoto received a steady stream of hate mail and death threats in 1938, as a growing number of army and navy officers spoke publicly against him. Irritated with Yamamoto’s immovable opposition to the tripartite pact with Nazi Germany and Fascist Italy, army hardliners dispatched military police to “guard” him. In one of the last acts of his short-lived administration, Navy Minister Mitsumasa Yonai reassigned Yamamoto to sea as Commander-in-Chief of the Combined Fleet, making it harder for assassins to get at him.

Many believed that Yamamoto’s career was finished when his old adversary Hideki Tōjō ascended to the Prime Ministership in 1941. Yet there was none better to run the combined fleet. When the pro-war faction took control of the Japanese government, he bowed to the will of his superiors. It was Isoroku Yamamoto who was tasked with planning the attack on Pearl Harbor.

Nothing worked against the Japanese war effort as much as time and resources. Painfully aware of the overwhelming productive capacity of the American economy, Yamamoto sought to emasculate the US High Seas fleet in the Pacific, while simultaneously striking at the oil and rubber rich resources of Southeast Asia. To accomplish this first objective, he planned to attack the anchorage at Pearl Harbor, followed by an offensive naval victory which would bring the Americans to the bargaining table. It’s not clear if he believed all that, or merely hoped that it might work out.

Yamamoto got his decisive naval engagement six months after Pearl Harbor, near Midway Island. Intended to be the second surprise that finished the carriers which had escaped destruction on December 7, American code breakers turned the tables. This time it was Japanese commanders who would be surprised.

American carrier based Torpedo bombers were slaughtered in their attack, with 36 out of 42 shot down.  Yet Japanese defenses had been caught off-guard, their carriers busy rearming and refueling planes when American dive-bombers arrived.

Midway was a disaster for the Imperial Japanese navy. The carriers Akagi, Kaga, Soryu and Hiryu, the entire strength of the task force, went to the bottom. The Japanese also lost the heavy cruiser Mikuma, along with 344 aircraft and 5,000 sailors. Much has been made of the loss of Japanese aircrews at Midway, but two-thirds of them survived. The greater long term disaster, may have been the loss of all those trained aircraft mechanics and ground crew who went down with their carriers.

The Guadalcanal campaign, fought between August 1942 and February ’43, was the first major allied offensive of the Pacific war and, like Midway, a decisive victory for the allies.

Needing to boost morale after the string of defeats, Yamamoto planned an inspection 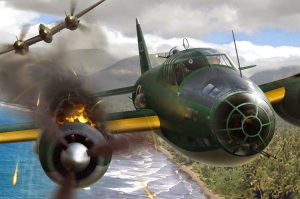 tour throughout the South Pacific. US naval intelligence intercepted and decoded his schedule.  The order for “Operation Vengeance” went down the chain of command from President Roosevelt to Secretary of the Navy Frank Knox to Naval Operations Admiral Ernest King to Admiral Chester Nimitz at Pearl Harbor. Sixteen Lockheed P-38 Lightnings, the only fighters capable of the ranges involved, were dispatched from Guadalcanal on April 17 with the order: “Get Yamamoto”.

intercepted over Rabaul on April 18, 1943. Knowing only that his target was “an important high value officer”, 1st Lieutenant Rex Barber opened up on the first Japanese transport until smoke billowed from its left engine. Yamamoto’s body was found in the wreckage the following day with a .50 caliber bullet wound in his shoulder, another in his head. He was dead before he hit the ground.

Isoroku Yamamoto had the unenviable task of planning the attack on Pearl Harbor, but he was an unwilling participant in his own history. “In the first six to twelve months of a war with the United States and Great Britain”, he had said, “I will run wild and win victory upon victory. But then, if the war continues after that, I have no expectation of success”.