It’s a crazy, mixed up world full of nut job conspiracy theories. This is not one of those.

The Eighteenth Amendment establishing the national prohibition of “intoxicating liquors” was passed out of Congress on December 17, 1917 and sent to the states, for ratification. The National Prohibition or “Volstead” act, so named for Chairman of the House Judiciary Committee Andrew Volstead, was enacted to carry out its intent.

At last ratified in January 1919, “Prohibition” went into effect at midnight, January 16, 1920. For thirteen years, it was illegal to import, export, transport or sell liquor, wine or beer in the United States.

“Industrial alcohol” such as solvents, polishes and fuels were “denatured” and rendered unpalatable by the addition of dyes and chemicals.  The problem was, it wasn’t long before bootleggers figured out how to “renature” the stuff. The Treasury Department, in charge of enforcement at that time, estimated that over 60 million gallons of industrial alcohol were stolen during Prohibition.

Not to be defied, the government upped the ante. By the end of 1926, denaturing processes were reformulated with the introduction of known poisons such as kerosene, gasoline, iodine, zinc, nicotine, formaldehyde, chloroform, camphor, quinine and acetone. Better still, Treasury officials required no less than 10% by volume of methanol, a virulent toxin used in anti-freeze.

You can renature all you want. that stuff isn’t coming out.

On Christmas eve 1926, sixty people wound up at New York’s Bellevue Hospital, desperately ill from contaminated alcohol. Eight of them died. Two days later the death toll was thirty-one. By New Year’s Day the number had soared to 400, with no end in sight.

Many who didn’t die, may have wished it. Drinkers experienced hallucinations, uncontrollable vomiting, even blindness.

In its January 10, 1927 issue, TIME Magazine reported  a doubling in toxicity levels, from the new method:  “The new formula included “4 parts methanol (wood alcohol), 2.25 parts pyridine bases, 0.5 parts benzene to 100 parts ethyl alcohol” and, as TIME noted, “Three ordinary drinks of this may cause blindness. (In case you didn’t guess, “blind drink” isn’t just a figure of speech.)”

New York medical examiner Charles Norris was quick to understand the problem, and organized a press conference to warn of the danger. “The government knows it is not stopping drinking by putting poison in alcohol,” he said. “Yet it continues its poisoning processes, heedless of the fact that people determined to drink are daily absorbing that poison. Knowing this to be true, the United States government must be charged with the moral responsibility for the deaths that poisoned liquor causes, although it cannot be held legally responsible.”

Norris pointed out that the poorest people of the city, were most likely to be victims: “Those who cannot afford expensive protection and deal in low-grade stuff”.

The towering sanctimony of the other side, is hard to believe.  Teetotalers argued that the dead had “brought it on themselves”. Long-time leader of the anti-saloon league Wayne B. Wheeler claimed “The Government is under no obligation to furnish the people with alcohol that is drinkable when the Constitution prohibits it. The person who drinks this industrial alcohol is a deliberate suicide.” 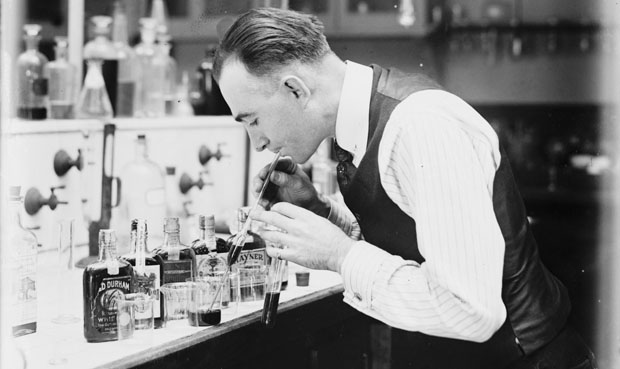 In the thirteen years of its existence, Prohibition was an unmitigated disaster.  Portable stills went on sale within a week of enactment, and organized smuggling was quick to follow. California grape growers increased acreage by over 700% over the first five years, selling dry blocks of grapes as “bricks of rhine” or “blocks of port”. The mayor of New York City sent instructions to his constituents, on how to make wine.

Smuggling operations became widespread, as cars were souped up to outrun “the law”. This would lead to competitive car racing, beginning first on the streets and back roads and later moving to dedicated race tracks. It’s why we have NASCAR, today.

Organized crime became vastly more powerful due to the influx of enormous sums of cash. The corruption of public officials was a national scandal.

Gaining convictions for breaking a law that everyone hated became increasingly difficult. The first 4,000 prohibition-related arrests resulted in only six convictions, and not one jail sentence.

In the end, even John D. Rockefeller, Jr., a lifelong teetotaler who contributed $350,000 to the Anti-Saloon League, had to announce his support for repeal.

On December 5, 1933, Utah became the 36th state to ratify the Twenty-first Amendment, repealing the Eighteenth and voiding the Volstead Act, returning control over alcohol policy to the states.

Federal officials continued to poison industrial alcohol until the very end, resulting in the death of some 10,000 citizens.   They didn’t even pretend not to know, what was happening.  Assistant Secretary of the Treasury Seymour Lowman may have had the last word, among those who would say “I’m from the government, and I’m here to help”.  Lowman opined that, if deliberately poisoned alcohol resulted in a more sober nation, then “a good job will have been done.”