Twenty-one-year-old Peter Knapp spotted the Confederate sharpshooter, behind the iron plate. He raised his rifle, aimed at the peephole, and fired. 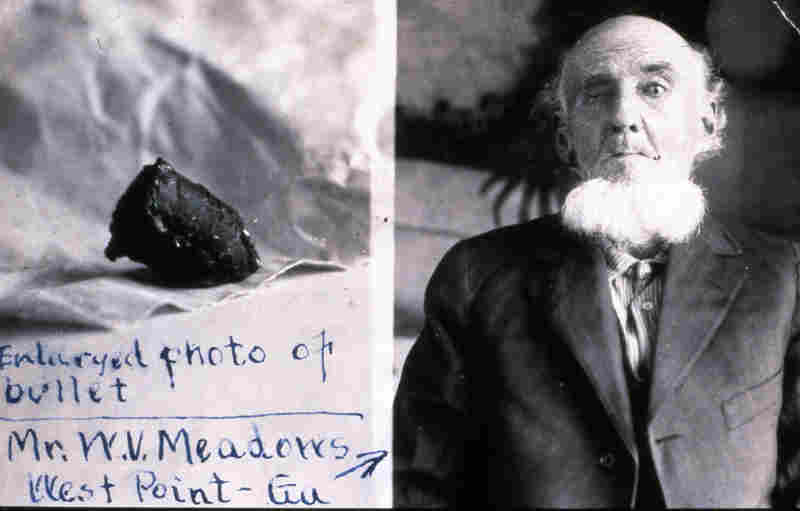 Willis Meadows grasped his throat, as he began to choke. The one-eyed 78-year old couldn’t breathe, as spasms became more violent. Whatever was in there wouldn’t come out. He thought his time had come. That’s when the bullet flew out of his mouth, clattering across the wooden table and onto the kitchen floor. It was March 24, 1921.

Fifty-nine years earlier, nineteen-year-old Willis V. Meadows signed up with his brothers and his cousins, enlisting in Company G of the 37th Alabama Volunteer Infantry.

Meadows was assigned to the western front along the Mississippi River. By the following summer, Company G had joined in defending Vicksburg Mississippi, laid siege by the Union army of Major General Ulysses S Grant.

On July 1, Meadows was positioned just outside of town, firing at the oncoming Yankees through a peephole in an iron boiler plate. Three blue-clad soldiers approached from the east, members of Company H of the Fifth Iowa Volunteer Infantry, with orders to take out enemy snipers.

Twenty-one-year-old Peter Knapp spotted the Confederate sharpshooter, behind the iron plate. He raised his rifle, aimed at the peephole, and fired. It was a perfect shot, the one-ounce slug clearing the small hole and striking the sniper in the right eye.

Willis fell over apparently dead, blood streaming out of his eye with the bullet lodged near his brain.  The battle moved on. Vicksburg Mississippi fell to the Union army on July 4, 1863. The “Confederate Gibraltar” wouldn’t celebrate another Independence Day, for 80 years.

Meanwhile, Meadows was found and brought to Union physicians. Surgeons probed for the bullet but were unable to find it, and didn’t feel it was safe to operate. Instead, he was put on a POW ship and brought to a Federal hospital. Meadows was later paroled and brought to a Confederate hospital, there to spend the remainder of the war as a patient and sometime nurse’s aide.

Peter Knapp was captured that November at Missionary Ridge, part of the Chattanooga campaign, and spent the rest of the war in a number of Confederate prisons, including the Hell of Andersonville.

Both went back to civil life after the war. Meadows returned to his farm in Lanett, Alabama, just east of the Georgia state line. He would later marry, but the marriage produced no children. Knapp farmed for a time in Michigan before marrying, later moving to Kelso, in Washington state.

Willis Meadows and Peter Knapp might have walked off the page of their time and on to obscurity, but for a circumstance even more unlikely, than a man holding a bullet in his head for fifty-eight years.

Following Meadows’ coughing episode in 1921, “Coughs Up Bullet” was a newspaper story, all over the country. “Ripley’s Believe It or Not” ran the story eleven years later, published around the world in 42 countries and 17 languages. Even Robert Ripley missed the best part.

Peter Knapp read the story, and realized that that had to have been his bullet. He contacted Meadows a few months later, and the two compared notes.  Sure enough.  The two had met again.

When politicians make war, it is the young men and sometimes the young women, who do the fighting, and the bleeding, and the dying. Now these two old men, former mortal enemies who had tried their level best to kill one another, became friends. The two old warriors spent the rest of their days, exchanging photographs and wishing each other good health.

The Central Point Oregon newspaper editor who heard the story in 1950, had the final word.  “Can you beat that for a story?” he asked.  “How small this little old world is, after all.”

It’s remarkable enough that Peter Knapp survived the brutality of the notorious Andersonville prison camp, an institution described as the “Auschwitz of the Civil War”. The Union POW camp at Elmira New York might be described as the Andersonville of the North. My own thrice-Great Grandfather went to his final rest there, along with his brother.

A passage from Knapp’s journal written in January 1862 expresses the man’s patriotism: ‘May God give wisdom and strength to our rulers that they counsel wisely, so that this government, which has been the wonder of the world, may triumph over its many enemies, crush treason to the earth never to rise again and proving to the world that republican governments are capable of withstanding any storm which may gather on their political horizon.’

Following his death in 1924 at the age of 81, Peter Knapp’s remains were cremated and, for whatever reason, never claimed by his family. The ‘cremains’ of his wife Georgianna joined those of her husband in 1930, and there they sat, unclaimed.

In 2012, Alice Knapp was researching the genealogical records of her deceased husband Steve, when she came upon the story of his ancestor. Stunned to learn that he had never been buried, Ms. Knapp called the Portland crematorium. ‘Yeah, he’s here’. Alice Knapp got the death certificate in Washington. I “called back and said, ‘By the way, is his wife there?’ and they said, ‘Yeah.’ The shock was that he was not ever buried. That was the surprise to me.”

So it was that Peter Knapp of the 5th Iowa Infantry was laid to rest with his wife at the Willamette National Cemetery in Oregon, with full military honors provided by the Oregon National Guard.

A folded American flag was presented to representatives of the Knapp family, ‘on behalf of a grateful nation’.  One-hundred and forty-seven years, after the Civil War.