By the height of the eugenics movement, some 30 states had passed legislation, legalizing the involuntary sterilization of individuals considered “unfit” for reproduction. All told, some 60,000 individuals were forcibly sterilized in state-sanctioned procedures. 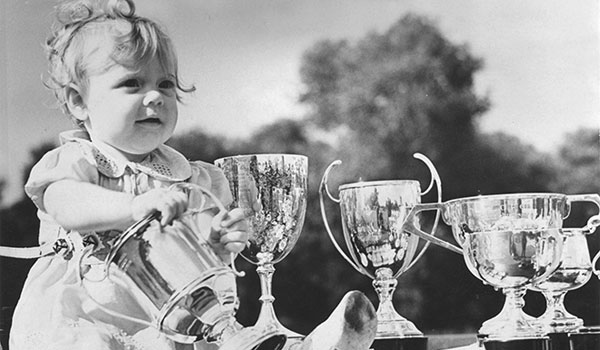 In 380BC, Plato described a system of state-controlled human breeding in his Socratic dialogue “The Republic”, introducing a “guardian class” to watch over over his ideal society. 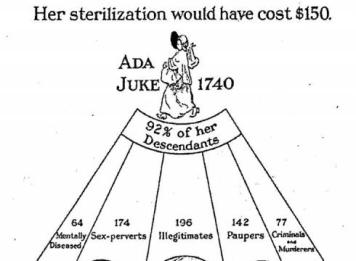 In the 19th century, Francis Galton studied the theories of his cousin Charles Darwin on the evolution of species, applying them to a system of selective breeding intended to bring “better” human beings into the world.  He called it his theory of “Eugenics”. 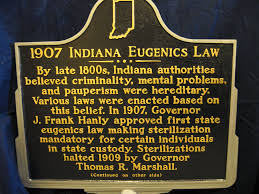 “Better Babies” competitions sprang up at state fairs across the United States, where babies were measured, weighed, and “judged”.  Like livestock.  By the 20s, these events had evolved into “Fitter Family” competitions.

One of the leaders of the eugenics movement was the pacifist and Stanford University professor, David Starr Jordan.  After writing several books on the subject, Jordan became a founding member of the Eugenics Committee of the American Breeders Association.  The higher classes of American society were being eroded by the lower class, he argued.  Careful, selective breeding would be required to preserve the nation’s “upper crust”.

Margaret Higgins Sanger believed that birth control should be compulsory for “unfit” women, who “recklessly perpetuated their damaged genetic stock by irresponsibly breeding more children in an already overpopulated world.”

An early advocate for birth control, Sanger has her supporters to this day, including former Presidential candidate Hillary Rodham Clinton. “I admire Margaret Sanger enormously”, Clinton said.  “Her courage, her tenacity, her vision…”  Time Magazine points out that “Sanger opened the first birth-control clinic in the United States”, describing her as “An advocate for women’s reproductive rights who was also a vocal eugenics enthusiast…”

Detractors have described Sanger as a “thoroughgoing racist”, citing her own words in What Every Girl Should Know, published in 1910:  “In all fish and reptiles where there is no great brain development, there is also no conscious sexual control. The lower down in the scale of human development we go the less sexual control we find. It is said that the aboriginal Australian, the lowest known species of the human family, just a step higher than the chimpanzee in brain development, has so little sexual control that police authority alone prevents him from obtaining sexual satisfaction on the streets”.

Admire or detest the woman as you choose, Sanger’s work established organizations which later evolved into the Planned Parenthood Federation of America.

Around the world, eugenics policies took the form of involuntarily terminated pregnancies, compulsory sterilization, euthanasia, and even mass extermination. 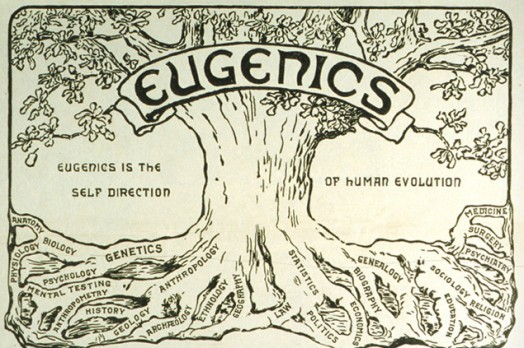 Madison Grant, the New York lawyer best known for his work in developing the discipline of wildlife management, was a leader in the eugenics movement, once receiving an approving fan letter from none other than Adolf Hitler.

Public policy and academic types conducted three international eugenics conferences to discuss the application of programs to improve human bloodlines.  The first such symposium convened in London in 1912, discussing papers on “racial suicide” and similar topics.  Presiding over the conference was none other than Major Leonard Darwin, the son of Charles Darwin, with Harvard president emeritus Charles William Eliot serving as vice President. 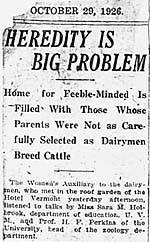 The 1912 conference was followed by two more in 1921 and 1932, both held in New York City.  Colleges and universities delved into eugenics as academic discipline, with courses exploring the ethical and public policy considerations of eliminating the “degenerate” and “unfit”.

In Pennsylvania, 270 involuntary sterilizations were performed without benefit of law, between 1892 and 1931.  On March 21, 1905, the Pennsylvania legislature passed “An Act for the Prevention of Idiocy”, requiring that every institution in the state entrusted with the care of “ idiots and imbecile children”, be staffed by at least one skilled surgeon, whose duty it was to perform surgical sterilization.  The bill was vetoed by then-Governor Samuel Pennypacker, only to return in 1911, ’13, ’15, ’17, ’19, and again in 1921.

By the height of the eugenics movement, some 30 states had passed legislation, legalizing the involuntary sterilization of individuals considered “unfit” for reproduction. All told, some 60,000 individuals were forcibly sterilized in state-sanctioned procedures.

California forced Charlie Follett to undergo a vasectomy in 1945 at the age of 15, when Follett found himself abandoned by alcoholic parents.   He was only one of some 20,000 Californians forced to undergo such a procedure.

Vermont passed a sterilization law in 1931, aimed at what then-University of Vermont zoology professor Henry Perkins called the “rural degeneracy problem.”  An untold number of “defectives” were forced to undergo involuntary sterilization, including Abenaki Indians and French-Canadian immigrants.

Indiana passed the first eugenic sterilization law in 1907, but the measure was legally flawed.  To remedy the situation, the Eugenics Record Office (ERO), founded in 1910 by the the former Harvard University Zoology Professor Charles Benedict Davenport, Ph.D.,  crafted a statute, which was later adopted by the Commonwealth of Virginia as state law in 1924.

That September, Superintendent of the ‘Virginia State Colony for Epileptics and Feebleminded’ Dr. Albert Sidney Priddy, filed a petition to sterilize one Carrie Elizabeth Buck, an 18-year-old patient at the institution whom Priddy claimed to be “incorrigible”.  A “genetic threat to society”.  Buck’s 52-year-old mother had a record of prostitution and immorality, Priddy claimed, and the child to whom Buck gave birth in the institution only proved the point.

Buck’s guardian brought her case to court, arguing that compulsory sterilization violated the equal protection clause of the 14th amendment.  After losing in district court, the case was appealed to the Amherst County Circuit Court, the Virginia Supreme Court, and finally the United States Supreme Court.

Dr. Priddy died along the way, Dr. John Hendren Bell taking his place.  SCOTUS decided the “Buck vs Bell” case on May 2, 1927, ruling in an 8–1 decision that Carrie Buck, her mother, and her perfectly normal infant daughter, were all “feeble-minded” and “promiscuous.”

In the majority ruling, Justice Oliver Wendell Holmes, Jr., did more than just greenlight the Virginia statute.  He urged the nation as a whole to get serious about eugenics, and to prevent large numbers of “unfit” from breeding:  “”It is better for all the world“, Holmes wrote, “if instead of waiting to execute degenerate offspring for crime, or to let them starve for their imbecility, society can prevent those who are manifestly unfit from continuing their kind“. In writing about Carrie Buck herself, her mother and infant daughter Vivian, Holmes delivered one of the most brutal pronouncements in all American jurisprudence: “Three generations of imbeciles are enough.”

It was later revealed that Carrie Buck had been raped by a member of the Dobbs family, the foster family who had taken her in and later had her committed.  To save the family “honor”.  No matter.  Buck was compelled to undergo tubal ligation, later paroled from the institution to become a domestic worker with a family in Bland, Virginia.  Buck’s daughter Vivian was adopted by the Dobbs family.

In a later examination of the child, ERO field worker Dr. Arthur Estabrook pronounced her “feeble minded” saying that she “showed backwardness”, supporting the “three generations” theory expressed in the SCOTUS opinion.

Vivian died from complications of measles in 1932, after only two years in school.  Dr. Estabrook failed to explain in his report, how she seemed to do well for those two years, nor did doctor Estabrook reveal how she came to be listed on her school’s honor roll, in April, 1931.