Dred Scott had lost at virtually every turn, only to win his freedom at the hands of the family which had once held him enslaved. 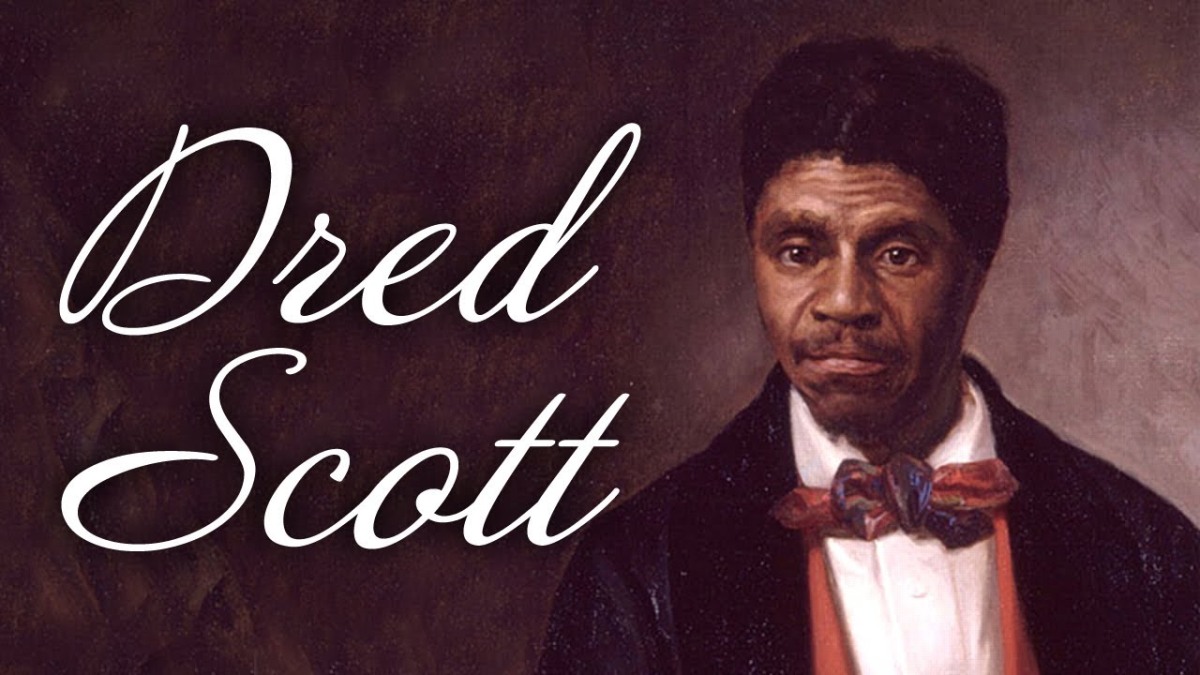 Dred Scott, his full name may have been “Etheldred”, was born into slavery in Southampton County, Virginia, sometime in the late 1790s.  In 1818, Scott belonged to Peter Blow, who moved his family and six slaves to Alabama, to attempt a life of farming. The farm near Huntsville was unsuccessful and the Blow family gave up the effort, moving to St. Louis Missouri in 1830, to run a boarding house. Around this time, Dred Scott was sold to Dr. John Emerson, a surgeon serving in the United States Army.

As an army officer, Dr. Emerson moved about frequently, bringing Scott with him. In 1837, Emerson moved to Fort Snelling in the free territory of Wisconsin, now Minnesota. There, Scott met and married Harriet Robinson, a slave belonging to fellow army doctor and Justice of the Peace, Lawrence Taliaferro. Taliaferro, who presided over the ceremony, transferred Harriet to Emerson, who continued to regard the couple as his slaves. Emerson moved away later that year, leaving the Scotts behind to be leased by other officers.

The following year, Dr. Emerson married Eliza Irene Sanford, and sent for the Scotts to rejoin him in Fort Jesup, in Louisiana. Harriett gave birth to a daughter while on a steamboat on the Mississippi, between the free state of Illinois and the Iowa district of the Wisconsin Territory.

Dr. Emerson died in 1842, leaving his estate to his wife Eliza, who continued to lease the Scotts out as hired slaves.

Four years later, Scott attempted to buy his freedom for the sum of $300, equivalent to about $8,000 today. Mrs. Emerson declined the offer and Scott took legal recourse. By this time, Dred and Harriett Scott had two daughters, who were approaching an age where their value would be greatly increased, should they be sold as slaves. Wanting to keep his family together, Scott sued.

Ironically, Dred Scott’s suit in state court, Scott v. Emerson, was financially backed by three now-adult Blow children, who had since become abolitionists. The legal position stood on solid ground, based on the doctrine “Once free, always free”. The Scott family had resided in free states and territories for two years, and their eldest daughter was born on the Mississippi River, between a free state and a free territory.

The verdict went against Scott but the judge ordered a retrial, which was held in January, 1850. This time, the jury ruled in favor of Dred Scott’s freedom. Emerson appealed and the Missouri supreme court struck down the lower court ruling, along with 28 years of Missouri precedent.

By 1853, Eliza Emerson had remarried and moved to Massachusetts, transferring ownership of the Scott family to her brother, John Sanford. Scott sued in federal district court, on the legal basis that the federal courts held “diversity jurisdiction”, since Sanford lived in one state (New York), and Scott in another (Missouri). Dred Scott lost once again and appealed to the United States Supreme Court, a clerical misspelling erroneously recording the case as Dred Scott v. Sandford.

On March 6, 1857, Chief Justice Roger B. Taney delivered the 7-2 majority opinion, enunciating one of the stupidest decisions, in the history of American jurisprudence:
“[Americans of African ancestry] had for more than a century before been regarded as beings of an inferior order, and altogether unfit to associate with the white race, either in social or political relations; and so far inferior, that they had no rights which the white man was bound to respect; and that the negro might justly and lawfully be reduced to slavery for his benefit. He was bought and sold, and treated as an ordinary article of merchandise and traffic, whenever a profit could be made by it”.

The highest court in the land had ruled that slaves were private property and not citizens, with no right to legal recourse. Furthermore, the United States Congress had erred in attempting to regulate slavery in the territories, and had no right to revoke the property rights of a slave owner, based on his place of residence.

The response to the SCOTUS opinion was immediate, and vehement. Rather than settle the issue of slavery, the decision inflamed public opinion, dividing an already fractured country, further. Frederick Douglass assailed Chief Justice Taney’s opinion, noting that:

“We are now told, in tones of lofty exultation, that the day is lost all lost and that we might as well give up the struggle. The highest authority has spoken. The voice of the Supreme Court has gone out over the troubled waves of the National Conscience, saying peace, be still . . . The Supreme Court of the United States is not the only power in this world. It is very great, but the Supreme Court of the Almighty is greater”.

The Supreme Court had spoken, but the Dred Scott story was far from over.  Eliza Irene Emerson’s new husband was Calvin C. Chaffee, a member of the United States Congress, and an abolitionist.

Following the Dred Scott decision, the Chaffees deeded the Scott family over to Henry Taylor Blow, now a member of the United States House of Representatives from Missouri’s 2nd Congressional district, who manumitted the family on May 26. Dred Scott had lost at virtually every turn, only to win his freedom at the hands of the family which had once held him enslaved.

For Harriett and the two Scott daughters, it was the best of all possible outcomes.  For Scott himself, freedom was short-lived.  Dred Scott died of tuberculosis, the following year.

Nationally, the Dred Scott decision had the effect of hardening enmities already nearing white-hot, increasing animosities within and between pro- and anti-slavery factions in North and South, alike. Politically, the Democratic party was broken into factions and severely weakened,  while the fledgling Republican party was strengthened, as the nation was inexorably drawn to Civil War.

The issue of Black citizenship was settled in 1868, via Section 1 of the 14th Amendment, which states: “All persons born or naturalized in the United States, and subject to the jurisdiction thereof, are citizens of the United States and of the State wherein they reside …”

Dred Scott is buried in the Calvary Cemetery in St. Louis, Missouri. The marker next to his headstone reads: “In Memory Of A Simple Man Who Wanted To Be Free.”