Around the year AD 14 or 15, the youngest son of the Roman war hero Germanicus found himself growing up around the Legions. As a boy of just two or three, little Gaius Caesar accompanied his father on campaigns in the north of Germania. Centurions were amused to see the boy dressed in miniature soldier’s uniform, including the boots, the “Caligae”, and the segmented Roman body armor – the “Lorica Segmentata”. 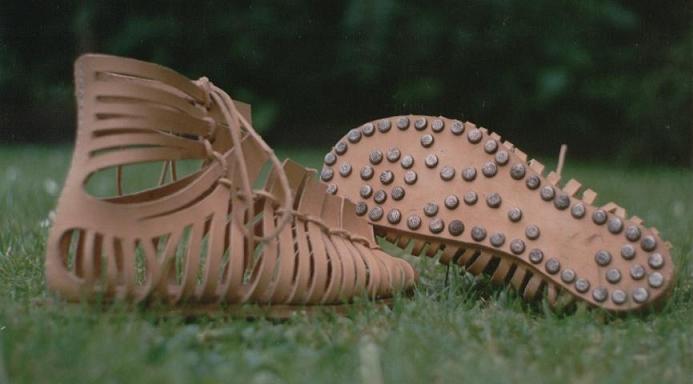 Around the year AD 14 or 15, the youngest son of the Roman war hero Germanicus found himself growing up around the Legions. As a boy of just two or three, little Gaius Caesar accompanied his father on campaigns in the north of Germania. Centurions were amused to see the boy dressed in miniature soldier’s uniform, including the boots, the “Caligae“, and the segmented Roman body armor – the “Lorica Segmentata”.

Soldiers of the Legions called him “Little Boots”, after the tiny soldier’s boots the boy liked to wear in camp.  In Latin, “Caligula“.  He’s said to have hated the name, but it stuck. 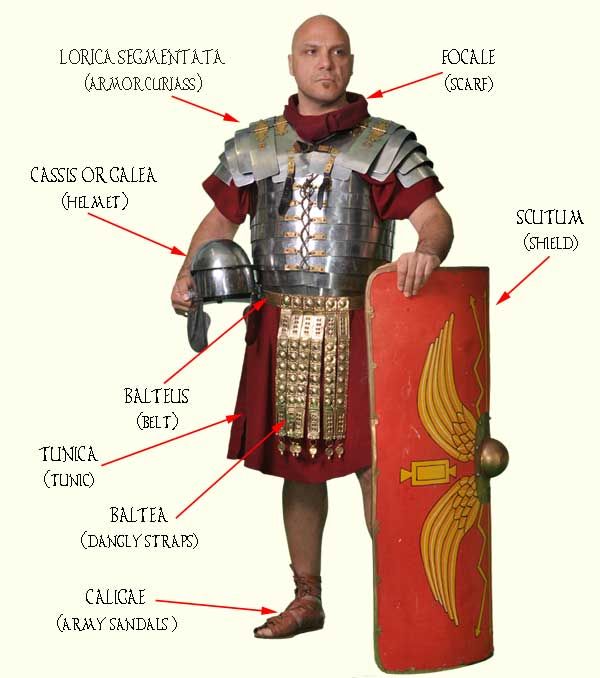 The Roman historian Suetonius writes that Germanicus was poisoned on the orders of Emperor Tiberius, who viewed the general as a political rival. Caligula’s mother Agrippina was denied permission to remarry, for the same reason. Agrippina was later exiled, as were her sons Drusus and Nero, while Caligula was remanded to the island of Capri and the personal custody of Tiberius, himself.

One observer spoke well of Caligula during this period, saying “Never was there a better servant or a worse master.” Suetonius believed the boy to be vicious and cruel, a natural actor who suppressed his hatred for the man responsible for the death of his family.  The historian writes that, when Tiberius brought Caligula to Capri, it was to “… prove the ruin of himself and of all men, and that he was rearing a viper for the Roman people and a Phaethon for the world.”

Phaethon, according to Greek mythology, was the child of the sun God Helios. As a boy, Phaethon was permitted to drive the sun chariot for a day, but couldn’t control the horses. With the earth in danger of being burned by the runaway sun, the God Zeus was forced to strike the chariot with a thunderbolt, killing the boy in the process.

Suetonius appears not to have been a fan.

When Tiberius died on March 16 AD 37, many believed his passing to have been hastened by a pillow, in the hands of the Praetorian Guard Commander Naevius Sutorius Macro.  Tiberius’ estate and titles were left to Caligula and Tiberius’ own grandson, Tiberius Gemellus.

On this day in the year 37, the Roman Senate annulled the will of the Emperor Tiberius, proclaiming 24-year-old Caligula, Emperor. After years of purges and treason trials, Caligula’s ascension to the throne was a welcome breath of fresh air.  The son of the war hero Germanicus was in charge.  What could go wrong.  All of Rome erupted in paroxysms of joy, proclaiming Caligula to be the first emperor Ever, admired by “all the world, from the rising to the setting sun”.

160,000 animals were sacrificed in three months of public jubilation.  The Jewish philosopher Philo of Alexandria described the first seven months as “completely blissful”.

Caligula’s first two years were relatively peaceful and prosperous.  The Emperor provided lavish gladiatorial games for the entertainment of the people, and abolished the sales tax.  He granted bonuses to the military and destroyed Tiberius’ papers, declaring the treason trials of his hated predecessor a thing of the past.  Too late for his own family, Caligula recalled those who had been sent into exile.  The bones of  his mother and brothers, were deposited in the tomb of Augustus.

The obelisk at St. Peter’s Square in Vatican City, originally erected in Alexandria in BC 30-28, was transported to Rome and erected in the year AD 40, where it stands to this day.  The “Piazza San Pietro Obelisk” is the only such monument to have survived from Roman times.

In AD39, Caligula suffered a severe and prolonged illness, in which he hovered between life and death for over a month. It may or may not have had anything to do with his subsequent behavior, but the man who emerged from that illness was widely believed to be insane.

The Emperor performed a spectacular stunt by ordering a temporary floating bridge to be built, using ships as pontoons, stretching for over two miles from the resort of Baiae (pronounced BAY-eye) to the neighboring port of Puteoli. Though Caligula could not swim, he rode his favorite horse, Incitatus, across the bridge, wearing the breastplate of Alexander the Great.  Tiberius’ soothsayer Thrasyllus of Mendes predicted that Caligula had “no more chance of becoming emperor than of riding a horse across the Bay of Baiae”.  Little Boots, had proven otherwise.

In case you’re wondering, Incitatus was the same horse whom Caligula appointed as priest, and planned to make a Consul of Rome, the top elected official of the Roman government.

In time, what seemed like mere eccentricities became terrifying and erratic. Caligula regularly made senators run alongside his chariot.  He’d order executions on a whim – common man or foreign dignitary – it didn’t matter.  At the Roman games, he once had an entire crowd section thrown into the arena, to be eaten alive by wild animals.  He said he was bored.

Caligula began to appear in public, dressed as various Gods and demigods:  Hercules, Mercury, Venus and Apollo.  He wished to be worshipped as “Neos Helios” – the New Sun.  He’d refer to himself as a God when meeting with politicians. He built temples for the worship of himself, where the heads of statues were replaced by his own likeness.

Later stories of wanton hedonism, cruelty, and sexual depravity may be exaggerated, but none seem to be without a grain of truth.  Roman politics often associated poor government policy, with insanity and sexual perversity.

Little Boots was murdered by his own Praetorian Guard in AD 41, like his predecessor Julius Caesar, stabbed thirty times in a conspiracy led by a man named Cassius. Stricken with grief and outraged by the murder, Caligula’s Germanic guard turned the scene into a bloodbath in a raging assault against conspirators, Senators and innocent bystanders, alike.

Most historians dismiss the floating bridge story as a myth.  No archaeological evidence has ever surfaced, to prove the story true.  Caligula’s two “pleasure barges”, extracted from the bottom of Lake Nemi, are a different story.

Locals had long known of the presence of a wreck at around 60-ft. deep in the extinct volcano-turned Lake, some twenty-five miles from Rome.  Occasionally, fishermen and treasure hunters would use grappling hooks, to bring up souvenirs.

The Fascist Dictator Benito Mussolini had heard of the legend, and ordered the lake drained.  One wreck turned out to be two in 1927 when, for the first time in 2,000 years, the “pleasure barges” of Emperor Caligula saw the light of day.

Dubbed Prima nave (the 1st ship) and Seconda nave, the former measured 230-ft., the latter 240.  The lavish furnishings included hot and cold running water, cedar planking with jewel encrusted prows, vessels of gold and silver and bathrooms of alabaster and bronze.  There were hand-operated bilge pumps and a platform rotating on ball bearings:  perhaps to rotate a great statue, or maybe it was a deck crane, for loading supplies.  There were glass mosaics in the floors and marble décor, stone statuary and gilded copper roofs.  One wreck bore a lead pipe, bearing the inscription “Property of Gaius Caesar Augustus Germanicus”.

On the night of May 31, 1944, US army shells hit the museum, causing little apparent damage but forcing a German artillery unit, to move.  Two hours later, smoke was seen coming from the windows.  The concrete shell of the Nemi Museum was spared by the fire.  The two priceless archaeological artifacts housed inside, were destroyed.  Official reports blamed German sabotage.  German newspaper editorials blamed Allied bombing.

During the retreat through Italy, German soldiers burned some 80,000 books and manuscripts of the Royal Society of Naples, out of spite. It’s easy to believe they torched the two Nemi Ships, as well.  Like Emperor Caligula himself 2,000 years before, the Italian dictator Mussolini died by violence, at the hands of his own countrymen.