In the five years I’ve been writing “Today in History”, I’ve written about 450 of these stories.  A father isn’t supposed to have favorites among his “children”, but I have to confess.  I do.  This is not one of those.  This one, I detest.

In the five years I’ve been writing “Today in History”, I’ve written about 450 of these stories.  A father isn’t supposed to have favorites among his “children”, but I have to confess.  I do.  This is not one of those.  This one, I detest.

The Oxford on-line Dictionary defines vivisection as: “noun – the practice of performing operations on live animals for the purpose of experimentation or scientific research”.

During the reign of Queen Victoria, British monarch from June 20, 1837 to January 22, 1901, a powerful opposition arose in Great Britain to the dissection of live animals. Labeled as “vivisection” by opponents of the practice, experiments were often performed in front of audiences of medical students, with or without anesthesia.

The Cruelty to Animals Act of 1876 stipulated that subject animals must be anesthetized, unless anesthesia would interfere with the point of the experiment. The measure further required that each animal could only be used once, though multiple procedures were permitted so long as each was part of the same experiment.

In the end, the subject animal had to be killed when the study was over.

In 1902, about the time when Russian physiologist Ivan Petrovich Pavlov was doing his conditioning experiments om dogs, Ernest Starling performed his first “experiment” on a small brown terrier.  Whether a stray or someone’s pet, is unclear.  A further “demonstration” was performed on the same animal by William Bayliss on February 2, 1903, at the end of which the dog was killed with a knife to the heart.

I don’t care to linger on the details of what was done to this dog.  It was difficult enough, to read about it.  Suffice it to say that Bayliss and Starling’s classes were infiltrated by two Swedish anti-vivisection activists, Lizzy Lind and Leisa Katherine Schartau.

The two women had attended 50 such classes at University College, keeping a diary throughout and later publishing observations in “The Shambles of Science: Extracts from the Diary of Two Students of Physiology”. In it, the pair disputed that the brown dog had been anesthetized, reporting that “The dog struggled forcibly during the whole experiment and seemed to suffer extremely during the stimulation. No anesthetic had been administered in my presence, and the lecturer said nothing about any attempts to anesthetize the animal having previously been made”.

Stephen Coleridge, secretary of the National Anti-Vivisection Society heard the two women’s story, and spoke angrily on behalf of the terrier.  “If this is not torture”, the barrister asked, “let Mr. Bayliss and his friends … tell us in Heaven’s name what torture is“.

There was little doubt that either professor if not both, would sue for libel.  Bayliss did and the jury retired for 25 minutes, returning with a unanimous verdict.  Bayliss was awarded £2,000 with £3,000 in court costs, equivalent to about £250,000 today, the verdict read to the applause of physicians in the public gallery.

On September 15, 1906, the World League against Vivisection unveiled a statue in Battersea’s Latchmere Recreation Ground, bearing the inscription “In Memory of the Brown Terrier Dog Done to Death in the Laboratories of University College in February 1903 after having endured Vivisection extending over more than Two Months and having been handed over from one Vivisector to Another Till Death came to his Release. Also in Memory of the 232 dogs Vivisected at the same place during the year 1902. Men and Women of England how long shall these Things be?” 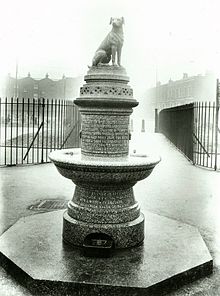 London’s teaching hospitals at first explored quiet means of taking down what they regarded as an insult to the profession.  By November, medical students were crossing the Thames with sledge hammers and crow bars, intending to take matters into their own hands.

Riots ensued, the worst nights occurring in London on December 10, 1907, when 1,000 medical students tried to pull the statue down, battling over the memorial with suffragettes, trade unionists and over 400 police officers.

More riots and brawls broke out in the weeks that followed.  Before long, the authorities were looking for a quiet way to make the statue go away.  Four workmen and 120 police officers quietly removed the Brown Dog Memorial over the night of March 9-10, 1910, hiding it in a bicycle shed. 3,000 anti-vivisectionists gathered in Trafalgar Square to demand its return, but to no avail.  The statue never reappeared, later to be broken up and melted down.

Seventy-five years would come and go, before a new Brown Dog memorial was commissioned by the National Anti-Vivisection Society and the British Union for the Abolition of Vivisection.

For all the fuss, it hardly made a difference. There were something like 300 experiments on live animals, in the year 1875.  By the time of the brown terrier’s live dissection, the number was 19,084.  In 2005 the figure had increased to 2.81 million, and that’s just the vertebrates. 7,306 of those, were dogs.