The writer and photographer Roger Caras once said “Dogs are not our whole life, but they make our lives whole.”

Years ago, a segment broadcast on National Public Radio’s All Things Considered, told the story of a working shepherd, who worked the hills of 1930s North Dakota. This man, I don’t recall his name, fell ill, and was taken to a local Jesuit hospital.

The man’s business partner and constant companion “Shep”, a sheepdog of unknown breed, befriended a nurse who would feed him a morsel out of the side door.

For 11 days, Shep waited at the hospital, for his master’s return.   On the 11th day the man died, his casket taken to the local train station and placed in the cargo hold, to be returned home for burial.

Shep was there throughout, and watched the train chug away with the body of his human.   He returned to that hospital door for sustenance, but every time he heard the train whistle, there was a sheepdog waiting at the station.

In those days, there were two trains a day.  For five years, Shep returned to the station, every time he heard that whistle.   He never missed a train. In time, the dog wasn’t quite as fast as he used to be, his hearing not so good. He was killed while waiting on the tracks, for the man who could never return.

“Greyfriar’s Bobby” was a Skye Terrier in 19th-century Edinburgh, who waited 14 years by the grave of his owner, City Police nightwatchman, John Gray. There he died in 1872 and was buried in the Greyfriars Kirkyard, not far from where he had stood watch. all those years.

Hachikō, an Akita known to Japanese children as chūken Hachikō (“faithful dog Hachikō”), used to tag along with his owner Hidesaburō Ueno, a professor of agriculture at Tokyo University. Ueno would commute to work and every evening, Hachikō would wait at the Shibuya Station, for the professor’s return.  Hidesaburō stopped coming home in May 1925, when a cerebral hemorrhage took him away while delivering a lecture.  Every day for nine years, nine months and fifteen days, the golden colored Akita appeared at Shibuya Station, precisely in time for that evening train.

Liam Tasker came from the Scottish town of Kirkcaldy, in the historic county of Fife.  Tasker joined the Royal Army in 2001 as a mechanic, but he wanted more.  He was transferred to the Royal Army Veterinary Corps six years later, and assigned as a trainer with the 1st Military Working Dog (MWD) Regiment.  Tasker was a natural, and rose quickly among the ranks of the group.  In 2010, Lance Corporal Tasker was paired with MWD Theo, a twenty-two-month-old English Springer Spaniel serving as a T.E.D.D. (Tactical Explosives Detection Dog) with the British Army.

A Military Working Dog is anything but a “disposable” asset.  It is a highly trained, specialized soldier who complements and adds to the abilities of his human partner, as that two legged soldier complements those of the dog.

The writer and photographer Roger Caras once said “Dogs are not our whole life, but they make our lives whole.”  So it was, with Liam and Theo.  The team was posted to Afghanistan, where the two managed to find 14 improvised explosive devices and weapons caches, in five months.  “I love my job and working with Theo,” Tasker would say. “He has a great character and never tires…He can’t wait to get out and do his job and will stop at nothing.”  Fourteen was a record for that time according to BBC, there is no telling how many lives were saved.  The pair proved so successful that their tour was extended, by a month.  It was a month too long.

On March 1, 2011, L/Cpl Tasker was killed by a Taliban sniper while on patrol in Helmand Province, and brought back to base by his fellow soldiers.  Theo suffered a seizure after returning to base and never recovered.  He died that afternoon.  It was believed that Theo’s seizure was brought on by the stresses of Tasker’s death, but the autopsy proved inconclusive.  Liam’s mother Jane Duffy later said, “I think Theo died of a broken heart, nobody will convince me any different.”

Major Alexander Turner of the 1st Battalion Irish Guards described the pair, saying “He used to joke that Theo was impossible to restrain but I would say the same about Lance Corporal Tasker.” Liam and Theo were returned to Great Britain, arriving first in RAF Lyneham, Wiltshire.  Rumors have gone around ever since, that the two were buried together.  Tasker’s mother would neither confirm nor deny.  She only said, with a sad smile, that “Liam and Theo are where they should be.” 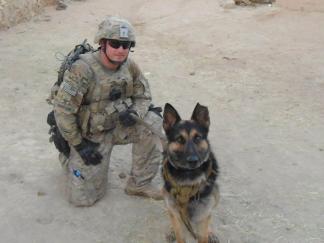 On a more upbeat note, and this story needs one, our daughter Carolyn and son-in-law Nate transferred to Savannah in 2013, where Nate deployed to the Wardak province of Afghanistan as a TEDD handler and paired with “MWD Zino”, a four-year-old German Shepherd trained to detect up to 64 explosive compounds.

The team was separated at the end of their tour but reunited months later, a story told on National Public Radio’s “Here & Now” program and produced out of their Boston affiliate, WBUR.

The radio program was broadcast the day of their reunion, in 2014.  It’s a great story, if you’re interested in listening to it.