Hulls would creak and groan with the pounding and rivets popped.  Captains in wheelhouses would order course headings, but helmsmen could do no better than 50° to either side of the intended course.  Some ships rolled more than 70°.  The 888-ft carrier USS Hancock, scooped tons of water onto its flight decks, 57′ up.

In September 1935, the Imperial Japanese Navy was conducting wargame maneuvers, when the fourth fleet was caught in extremely foul weather. By the 26th, the storm had reached Typhoon status,  The damage to the Japanese fleet was near catastrophic. Two large destroyers had their bows torn away by heavy seas. Several heavy cruisers suffered major structural damage.  Submarine tenders and light aircraft carriers developed serious cracks in their hulls. One minelayer required near total rebuild, and virtually all fleet destroyers suffered damage to their superstructures. 54 crewmen were lost.

Nine years later, it would be the turn of the American fleet.

The war in the Pacific was in its third year in December 1944. A comprehensive defeat only weeks earlier had dealt the Imperial Japanese war effort a mortal blow at Leyte Gulf, yet the war would go on for the better part of another year.

Carrier Task Force 38 was a massive assembly of warships, a major element of the 3rd Fleet under the Command of Admiral William “Bull” Halsey.  In formation, TF-38 moved in three eight-mile diameter circles, each with an outer ring of destroyers, an inner ring of battleships and cruisers, and a mixed core of 35,000-ton Essex class and smaller escort carriers. TF-38 was a massive force, fielding eighty-six warships, altogether.

By mid-December 1944, Task Force 38 had been underway for three weeks, having just completed three days of heavy raids against Japanese airfields in the Philippines, suppressing enemy aircraft in support of American amphibious operations against Mindoro.  Ships were badly in need of re-supply.  A replenishment fleet, 35 ships in all, was sent to the nearest spot near Luzon, yet still outside of Japanese fighter range.  Replenishment operations began the morning of the 17th.

Rapid movement into previously enemy-held territory made it impossible to establish advance weather reporting.  By the time that Task Force aerological (meteorological) service reports made it to ships in the operating area, weather reports were at least twelve hours old.

Three days earlier, a barometric low pressure system had begun to form off Luzon, fed by the warm waters of the Philippine sea.  High tropospheric humidity fed and strengthened the disturbance, as counter-clockwise winds began to develop around the low pressure center.  By the 18th, this small “tropical disturbance” had developed into a compact but powerful cyclone.

Replenishment operations began the morning of the 17th, as increasing winds and building seas made refueling increasingly difficult.  Refueling hoses were parted on several occasions and thick hawsers had to be cut to avoid collision, as sustained winds built to 40 knots.  Believing the storm center to be 450 miles to his southeast, Admiral Halsey didn’t want to return to base.  That would take too long, and combat operations were scheduled to resume, two days later.  Halsey needed the carrier group refueled and on station, and so it was decided.  Task Force 38 and the replenishment fleet, would proceed to a second replenishment point, hoping to resume refueling operations on the morning of the 18th.

Four times over the night of December 17-18, course was corrected in the search for calmer water.  Four times, the ships of Task Force 38 and it’s attendant resupply ships, turned closer to the eye of the storm.  2,200-ton destroyers pitched and rolled like corks, towering over the crest of 70-waves, only to crash into the trough of the next, shuddering like cold dogs as decks struggled to shed thousands of tons of water.

Hulls would creak and groan with the pounding and rivets popped.  Captains in wheelhouses would order course headings, but helmsmen could do no better than 50° to either side of the intended course.  Some ships rolled more than 70°.  The 888-ft carrier USS Hancock, scooped tons of water onto its flight decks, 57′ up.

The lighter destroyers got the worst of it, finding themselves “in irons” – broad side to the wind and rolling as much as 75°, with no way to regain steering control.  Some managed to pump seawater into fuel tanks to increase stability, while others rolled and couldn’t recover, as water cascaded down smokestacks and disabled engines.

146 aircraft were either wrecked or blown overboard.  The carrier USS Monterrey nearly went down in flames, as loose airplanes crashed about on hanger decks and burst into flames.  One of those fighting fires aboard Monterrey was then-Lieutenant Gerald Ford, the former Michigan Wolverine center and future President of the United States.

Many of the ships of TF-38 sustained damage to above-decks superstructure, knocking out radar equipment and crippling communications. 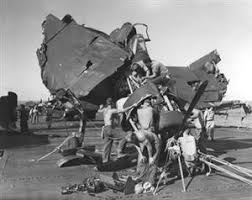 It could have been worse.  The destroyer escort USS Tabberer defied orders to return to port, Lieutenant Commander Henry Lee Plage conducting a 51-hour boxed search for survivors, despite the egregious pounding being taken by his own ship.  USS Tabberer plucked 55 swimmers from the water, survivors of the capsized destroyers Hull and Spence.

Typhoon Cobra moved on that night, December 19 dawning clear with brisk winds. Admiral Halsey ordered “All ships of the Task Force line up side-by-side at about ½ mile spacing and comb the 2800-square mile area” in which they’d been operating.  Carl M. Berntsen, SoM1/C aboard the destroyer USS DeHaven, recalled that “I saw the line of ships disappear over the horizon to starboard and to port”. The Destroyer USS Brown rescued six survivors from the Monaghan, and another 13 from USS Hull.  18 more would be plucked from the water, 93 in all, by ships spread across 50-60 miles of open ocean.

When it was over, Admiral Chester Nimitz said typhoon Cobra “represented a more crippling blow to the Third Fleet than it might be expected to suffer in anything less than a major action.”

Carl Martin Berntsen passed away on October 13th, 2014 in Kitty Hawk, North Carolina. He would have been 94, the following month. I am indebted to him and his excellent essay for this story.  Virtually all ships of Task Force 38 were damaged to some degree.  I tip my hat to Wikipedia, for the following summary of the more serious instances.

USS Spence – rudder jammed hard to starboard, capsized and sunk with 317 men drowned (23 survivors) after hoses parted attempting to refuel from New Jersey because they had also disobeyed orders to ballast down directly from Admiral Halsey