ICYMI – Today, potatoes are the 5th largest crop on the planet, following rice, wheat, maize and sugar cane.  Almost 5,000 varieties are preserved in the International Potato Center in Peru.

The expedition which would end in the Lost Colony of Roanoke began in 1585, financed by Sir Walter Raleigh and led by Sir Ralph Lane. On board was the Oxford trained mathematician and astronomer Sir Thomas Herriot, the man who would introduce the potato to England on this day, the following year.

The Inca of Peru seem to have been the first to cultivate potatoes, around 8,000BC.

Wild potatoes contain toxins to defend themselves against fungi and bacteria, toxins unaffected by the heat of cooking.  In the Andes, mountain people learned to imitate the wild guanaco and vicuña, licking clay before eating the poisonous plants. In this manner, toxins pass harmlessly through the digestive system. Mountain people dunk wild potatoes in “gravy” made of clay and water, accompanied with coarse salt. Eventually, growers developed less toxic tubers, though the poisonous varieties are still favored for their frost resistance.  Clay dust is sold in Peruvian and Bolivian markets, to this day.

Spanish Conquistadors who arrived in Peru in 1532 eventually brought potatoes home to Spain.  The first written mention of the potato comes from a delivery receipt dated November 28, 1567, between the Grand Canaries and Antwerp.

Among its other virtues, the potato provides more caloric energy per acre of cultivation than either maize or grain and, being below ground, is likely to survive calamities that would flatten other crops.  Taters quickly became staple foods in northern and eastern Europe, while in other areas remaining the food of peasants and livestock.

French army pharmacist Antoine-Augustin Parmentier was captured by Prussians during the seven years war, learning to appreciate the gustatorial delights of the potato while in captivity.

Primarily used as hog feed in his native France, Parmentier was determined to bring respectability to the lowly tuber.  It must have been a tough sell, as many believed that potatoes caused leprosy.  The Paris Faculty of Medicine declared them edible in 1772, thanks largely to Parmentier’s efforts.  He would host dinners featuring multiple potato dishes, inviting such luminaries as Benjamin Franklin and Antoine Lavoisier.  Franklin was enormously popular among the French nobility.  Before long Louis XVI was wearing a purple potato flower in his lapel.  Marie Antoinette wore them in her hair.

Sir Walter Raleigh first introduced potatoes to Ireland in 1589.  By mid-19th century, the crop occupied one third of arable land in Ireland. This was due entirely to landless laborers, renting tiny plots from landowners interested only in raising cattle or producing grain for market. An acre of potatoes and the milk of a single cow was enough to sustain a family.  Even poor families could grow enough surplus to feed a pig, which could then be sold for cash.

Calamity struck Ireland in 1845, in the form of a blight so horrific that US military authorities once considered stockpiling the stuff as a biological weapon.  Seemingly overnight, Ireland’s staple food crop was reduced to a black, stinking ooze.

There followed the seven years’ “an Gorta Mór”, “the Great Hunger”, killing over a million Irish and reducing the population by 20-25% through death and emigration.  Throughout the Irish potato famine, the country continued to produce and export thirty to fifty shiploads per day of food produce, more than enough to feed the population.

Today, many see the effects of the absentee landlord system and the penal codes as a form of genocide.  At the time, already strained relations with England were broken, giving rise to Irish republicanism and leading to Irish independence in the following century.

Until Nazis tore it down, there was a statue of Sir Francis Drake in Offenburg, Germany, giving him credit for introducing the potato. His right hand rested on the hilt of his sword, his left gripping a potato plant. The inscription read “Sir Francis Drake, disseminator of the potato in Europe in the Year of Our Lord 1586. Millions of people who cultivate the earth bless his immortal memory”.

Today, potatoes are the 5th largest crop on the planet, following rice, wheat, maize and sugar cane.  Almost 5,000 varieties are preserved in the International Potato Center in Peru.

In the Star Wars movie “The Empire Strikes Back”, there’s a chase sequence through an “asteroid” field in which some of the asteroids are, in fact, potatoes.

Scientists have created genetically modified potatoes to ward off pests.  The “New Leaf”, approved in 1995, incorporated a bacterial gene rendering it resistant to the Colorado potato beetle, an “international superpest” so voracious that some credit the creature for creating the modern pesticide industry.  Other varieties were genetically modified to resist phytophthora infestans, the cause the Irish potato famine.

Seeming to prefer insecticides and anti-fungal sprays, “food activists” decry such varieties as “Frankenfoods”.  Each time, the improved variety has been hounded out of business.

In 2014, Idaho-based J.R. Simplot Co. introduced the “innate” potato.  Rather than “transgenic” gene splicing, the introduction of genome sequences from unrelated species, the innate variety uses a “silencing” technique on the tuber’s own genes, to resist the bruising and browning that results in 400 million pounds of waste and a cost to consumers of $90 million.

In October 2016, NBC news reported that “The U.S. Department of Agriculture has approved commercial planting of two types of potatoes that are genetically engineered to resist the pathogen that caused the Irish potato famine. The potatoes next must clear a voluntary review process through the Food and Drug Administration as well as get the OK from the U.S. Environmental Protection Agency“. 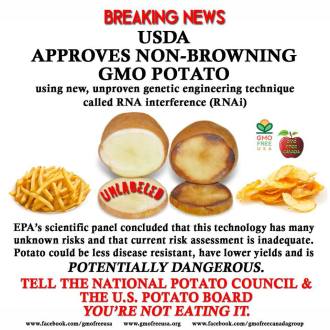 The Innate potato produces less acrylamide, a known carcinogen produced by normal potatoes in the high heat of fryers.

This might actually be the first genetically modified variety to succeed in the marketplace, but McDonald’s, possibly the largest potato user on the planet, has already announced that “McDonald’s USA does not source GMO potatoes, nor do we have current plans to change our sourcing practices.”

You can never underestimate the power of hysterical people, in large groups.