Most of his troops were about to end their enlistments, effective at the end of the year. A mere five days away.  Washington himself, who had become Commander-in-Chief of an Army with an average of nine rounds’ powder per man, thought they may have reached the end, writing to his cousin in Virginia “I think the game is pretty near up”.

1776 started out well for the Patriot cause, with the British evacuating Boston in March, the June victory at Fort Moultrie South Carolina, and the Continental Congress adopting the Declaration of Independence on July 4.

Things took a turn for the worse in August, with General George Washington’s defeat at the Battle of Long Island, and the loss of the strategically important port of New York that September. It wasn’t all bad, Benedict Arnold’s October defeat at Valcour Island in Vermont, cost the fleet of General Sir Guy Carleton dearly enough that it had to turn back, buying another year of life for the Patriot cause.

By the end of November, General Howe pushed the last American troops out of New York, chasing Washington’s shrinking army through New Jersey and across the Delaware River into Pennsylvania.

Washington’s men gathered up or destroyed every boat they could find for miles, while across the Delaware, British General Lord Cornwallis established outposts from New Brunswick to Burlington, including one at Trenton, New Jersey.

Camping on the western banks of the Delaware, Washington was in desperate straits. Most of the Patriots’ military supplies and artillery had been lost in the defense of New York.  Food, ammunition and equipment were in short supply, men were deserting as the string of defeats brought morale to a new low. 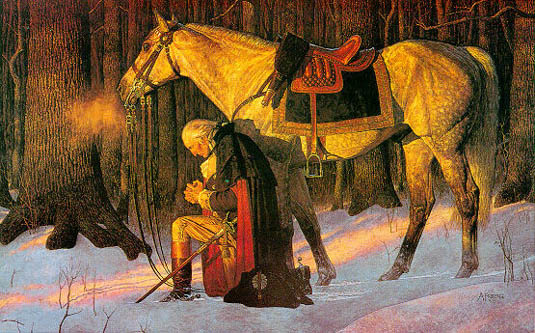 Most of his troops were about to end their enlistments, effective at the end of the year. A mere five days away.  Washington himself, who had become Commander-in-Chief of an Army with an average of nine rounds’ powder per man, thought they may have reached the end, writing to his cousin in Virginia “I think the game is pretty near up”.

The Americans needed a decisive victory, and quickly, if their cause was to survive. Washington planned a three-pronged attack on the Hessian garrison at Trenton, himself at the head of a 2,400 man army, flanked by a 1,900 man diversionary force under Colonel John Cadwalader and a blocking move by 700 men under General James Ewing.

As the army began the famous crossing of the Delaware that Christmas night, the password was “Victory”. There was only one recognized response:  “Or Death”.

Washington’s three crossings soon dissolved into one, as Cadwalader and Ewing both turned back. The weather that night was dreadful.  A howling ‘nor-easter’ came up at 11:00, hampering the crossing as freezing rain changed to sleet and sleet to snow. Horses balked at being led onto flat-bottom barges.  Cannon weighing as much as 1,720 lbs had to be tied down to prevent capsize. With visibility near zero, several men fell overboard during the crossing.  One soldier said it “blew a perfect hurricane”.

Washington’s crossing may have itself been forced to turn back from the difficult crossing, but for the indispensable nautical skills of Colonel John Glover’s Marblehead Militia, the “amphibious regiment”.

Two froze to death on the overnight march to Trenton. Men were so poorly equipped that many of them lacked boots, the soaked and freezing rags wrapped around their feet not enough to keep them from leaving bloody footprints in the snow. 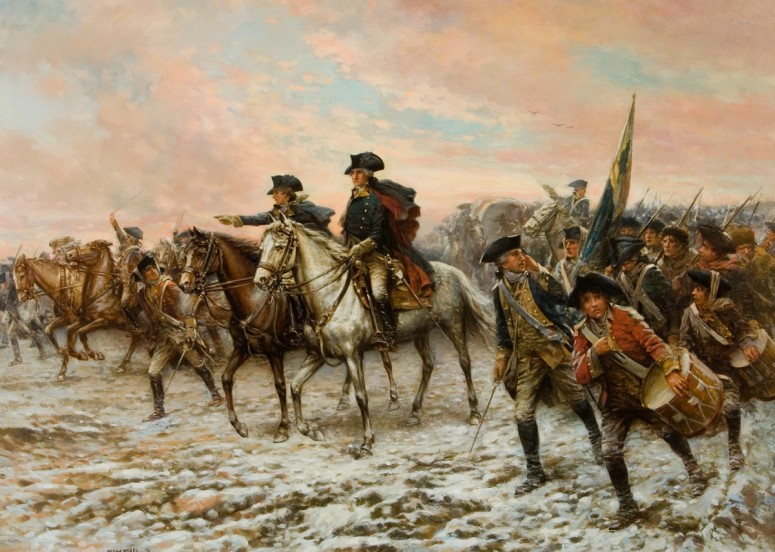 Approaching Trenton along parallel roads, General John Sullivan sent word to Washington that the weather was wetting his men’s gunpowder. Washington responded, “Tell General Sullivan to use the bayonet. I am resolved to take Trenton.”

The Patriot force arrived at Trenton at 8am December 26, completely surprising the Hessian garrison. There is a story about the Hessians being drunk or hungover after Christmas celebrations, but the story is almost certainly untrue.

Unaware of Washington’s march on Trenton, 50 colonists had attacked a Hessian outpost earlier that morning. While Washington worried that his surprise was blown, Colonel Rall apparently believed that this was the attack he’d been warned about. He expected no further action that day.

The tactical surprise was complete for the American side. Hessian soldiers spilled out of their quarters and tried to form up, but most were shot down or dispersed. A few American civilians, residents of Trenton, even joined in the fight. All told, Hessian losses were 22 killed, 92 wounded, 918 captured and 400 escaped. Four Hessian colonels were killed, including Rall himself. The Americans suffered the two who had frozen to death, and five wounded. They had won the first major victory of the Revolution.

On December 30, the Americans once again crossed the Delaware, eluding a main force under Generals Cornwallis and Grant, proving on January 3rd at a place called Princeton, that they could defeat a regular British army in the field.

Encouraged by these victories, many of Washington’s men extended their terms of enlistment, and new enlistments flooded in. The American Revolution would slog on for almost six more years.  For today, the Patriot cause had lived to fight another day