A Military Working Dog (MWD) is anything but a “disposable” asset.  It is a highly trained, specialized soldier who complements and adds to the abilities of his human partner, as that two legged soldier complements those of the dog.

There are times when two highly trained individuals are able to function at a level higher than the sum of their parts.  Professional athletes like NFL linemen and NHL forwards are two examples.  Another is often the partnership formed between law enforcement officers.

On the battlefield, few assets are more powerful than a well equipped and highly trained soldier. Unless we’re pairing that soldier with a Military Working Dog.

A Military Working Dog (MWD) is anything but a “disposable” asset.  It is a highly trained, specialized soldier who complements and adds to the abilities of his human partner, as that two legged soldier complements those of the dog.

“Nemo”, born in October 1962, entered the United States Air Force as a sentry dog in 1964, at the age of 1½ years.  After an 8-week training course at Lackland AFB Sentry Dog Training School in San Antonio, Texas, the 85-pound German Shepard was assigned to Airman Leonard Bryant Jr., and sent to Fairchild Air Base in Washington for duty with Strategic Air Command.

The pair was transferred to the Republic of South Vietnam with a group of other dog teams, and assigned to the 377th Security Police Squadron, stationed at Tan Son Nhut Air Base.  Six months later, Bryant rotated back to the States, and Nemo was paired with 22-year-old Airman 2nd Class Robert Thorneburg.

Early on the morning of December 4, 60 Vietcong guerrillas emerged from the jungle, setting off a near-simultaneous alarm from several sentry dogs on perimeter patrol.

Three dogs, Rebel, Cubby and Toby, were killed with their handlers in a hail of bullets.  Several other handlers were wounded, including one who was able to maintain contact with the enemy, notifying Central Security Control of their location and direction of travel.

Thanks to the early warning, a machine gun team was ready and waiting when 13 infiltrators approached the main aircraft parking ramp.  None of them lived to tell the story.  Security forces quickly deployed around the perimeter, driving some infiltrators off and others into hiding.  Daylight patrols reported that all VC infiltrators were gone, either killed or captured, but they had made a big mistake.  They should have brought the dogs with them. 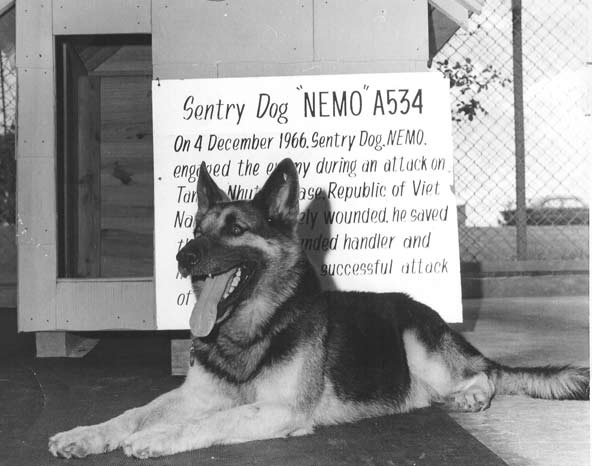 That night, Thorneburg and Nemo were out on patrol near an old Vietnamese graveyard, about ¼ mile from the air base’ runways.  Nemo alerted on something.  Before Thorneburg could radio for backup, that something started shooting.  Thorneburg released the dog and charged in shooting, killing one Vietcong before being shot in the shoulder.  Nemo was badly wounded, shot in the face, the bullet entering below his eye and exiting his mouth.  Ignoring the injury, Nemo attacked the four enemy soldiers hiding in the brush, giving his partner time to call for reinforcements.

Four additional Vietcong were discovered hiding underground, as quick reaction teams scoured the area.  They found Nemo and Thornburg, both seriously wounded, together on the ground.  Both would survive, though Thorneburg was shot a second time, while returning to base.

I’m sure that individual dog handlers were as good to their dogs as they knew how to be, during the Vietnam era.  That’s a guess, but having an MWD handler in the family, I think it’s a good one.  The Department of Defense bureaucracy was another matter.

Roughly 4,000 dogs served in Vietnam, leading patrols through the dense jungle terrain.  Overall, these animals are credited with saving close to 10,000 lives.

When Marine Corps handler Steve Reichenbach arrived in country in 1966, he was paired with a cream colored Great Dane-German Shepherd mix.  “Major”, whose previous handler had been killed only weeks before, was an excellent match for Reichenbach, both being “mellow, relaxed, even-keeled types” who bonded, almost immediately.

At 90 pounds, Major’s size alone seemed to intimidate the enemy, often leading VC to trip off ambushes, too early.

A land mine exploded on the Marine’s last day in country, killing four and wounding six.  Though badly wounded, Reichenbach would survive the war.  Major was unhurt, but he wasn’t so lucky.  The last the pair saw of one another, was in the medevac chopper.  Major still had Reichenbach’s blood on his fur, when he was paired with his next handler.  The marine never saw his “battle buddy” after that, but later heard the dog had succumbed to some tropical disease.

The vast majority of MWDs who served in Vietnam, were left behind as “surplus equipment”.  Left to succumb to tropical disease, to be euthanized by the South Vietnamese Army, or worse.  Nemo was one of the few lucky ones.  He came home.

MWD Nemo was officially recognized for having saved the life of his handler, and preventing further destruction of life and property.   He was given the best of veterinary care and, on June 23, 1967, USAF Headquarters directed that he be returned to the United States.  The first sentry dog officially retired from active service.

The C124 Globemaster touched down at Kelly Air Force Base, Texas, on July 22, 1967.  Nemo lived out the seven years remaining to him in a permanent retirement kennel at the DoD Dog Center at Lackland Air Force Base.