The 10,000lb, 10’8″ weapon was released at 28,900′. Seconds later, a perfect circle of 64 detonators exploded inside the heart of the bomb, compacting the plutonium core into a supercritical mass and  exploding with the force of 20,000 tons of high explosive. 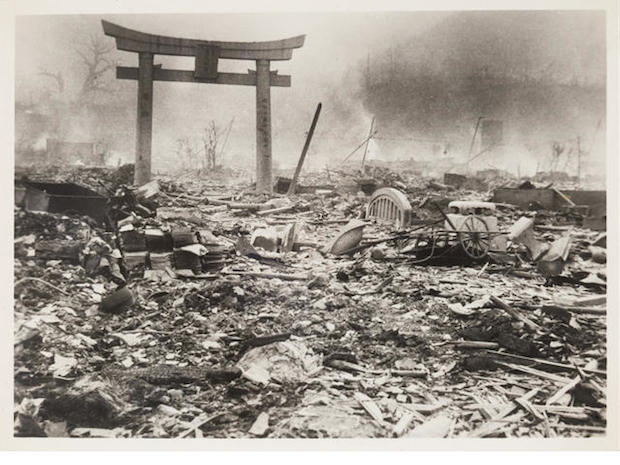 The line comes from the Bhagavad Gita, the Hindu epic which Mohandas Gandhi described as his “spiritual dictionary”. On July 16, 1945, these words were spoken by J. Robert Oppenheimer, director of the Manhattan Project, as he witnessed “Trinity”, the world’s first nuclear detonation.

The project had begun with a letter from prominent physicists Leo Szilard and Albert Einstein to President Franklin Roosevelt, warning that Nazi Germany may have been working to develop a secret “Super Weapon”.  The project ended with the explosion of the “Gadget” in the Jornada del Muerto desert, equaling the explosive force of 20 kilotons of TNT. 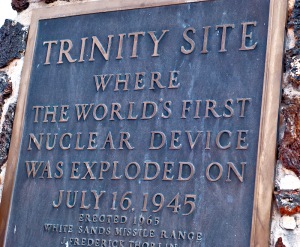 The Manhattan Project, the program to develop the Atomic Bomb, was so secret that even Vice President Harry Truman was unaware of its existence.

President Roosevelt passed away on April 14, and Harry Truman was immediately sworn in as President. He was fully briefed on the Manhattan project 10 days later, writing in his diary that night that the US was perfecting an explosive “great enough to destroy the whole world”.

Nazi Germany surrendered on May 7, but the war in the Pacific theater, ground on. By August, Truman faced the most difficult decision ever faced by an American President. Whether to drop an atomic bomb on Imperial Japan.

The morality of President Truman’s decision has been argued ever since. In the end, it was decided that to drop the bomb would end the war faster, with less loss of life on both sides, compared with the invasion of the Japanese home islands.

So it was that the second nuclear detonation in history took place on August 6 over the city of Hiroshima, Japan. “Little Boy”, as the bomb was called, was delivered by the B29 Superfortress “Enola Gay”, named after the mother of United States Army Air Forces pilot Lieutenant Colonel Paul Tibbets. 70,000 Japanese citizens were vaporized in an instant.  Another 100,000 later died from injuries and the delayed effects of radiation.

Even then the Japanese Government refused to surrender. ‘Fat Man’, a plutonium bomb carried by the B29 “Bockscar”, was dropped on Nagasaki, on August 9.

Kokura was the primary target on this day, but local weather reduced visibility.  Bockscar criss-crossed the city for the next 50 minutes, but the bombardier was unable to see well enough to make the drop.  Japanese anti-aircraft fire became more intense with every run, and Second Lieutenant Jacob Beser reported activity on the Japanese fighter direction radio bands.

In the early 1960s, the Nagasaki Prefectural Office put the death count resulting from this day, at 87,000.  70% of the city’s industrial zone was destroyed.

Japan surrendered unconditionally on the 14th of August, ending the most destructive war in history.

Nazi Germany was, in fact, working on a nuclear weapon, and had begun before the allies. They chose to pursue nuclear fusion, colliding atomic particles together to form a new type of nuclear material, instead of fission, the splitting of the atom which resulted in the atomic bomb.

That one critical decision, probably taken in some laboratory or conference room, put Nazi Germany behind in the nuclear arms race. How different would the world be today, had Little Boy and Fat Man had swastikas painted on their sides.