Life Magazine published a collector’s edition in 1997, listing 100 heroes from American history.  Alongside the names of George Washington and Thomas Jefferson, Sally Ride and Abraham Lincoln, was that of a small Mongolian horse.  Sergeant Reckless. 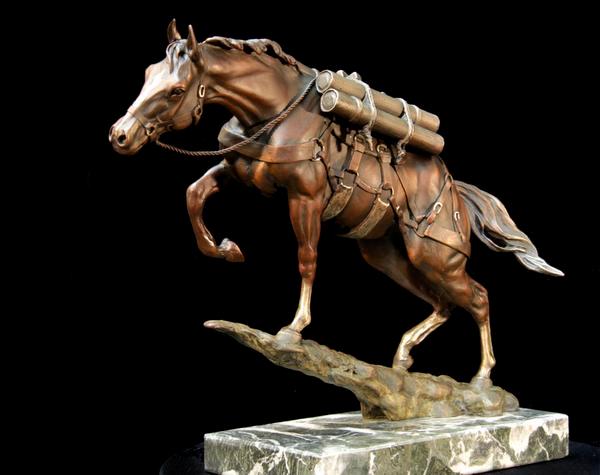 A Recoilless Rifle is a type of lightweight tube artillery.  Think of a portable cannon.  Kind of a bazooka, really, only the Recoilless fires modified shells rather than rockets.   The back blast of these shells compensates for the mule’s kick to be expected from such a weapon, making the rifle “recoilless”.

While that reduces projectile range, reduced gas pressures permit a thinner-walled barrel, resulting in a weapon light enough to be served by a 2 to 3-man crew, and shoulder fired by a single infantryman.

The “RCLR” weapon system has provided the punch of artillery to mobile troop formations since the early days of WWII, including Airborne, Special Forces and Mountain units.

The problem arises when combat operations consume ammunition faster than the supply chain can replace it.  Mountainous terrain makes the situation worse.  Even today in the more mountainous regions of Afghanistan, there are times when the best solution for the problem, is horsepower.

Ah Chim-hai was a chestnut mare of mixed Mongolian and Thoroughbred lineage, a race horse at the track in Seoul, South Korea.  Her name translated as “Flame of the Morning”.

Lieutenant Eric Pedersen of the recoilless rifle platoon, anti-tank company, needed a pack animal to carry the weapon’s 24-lb shells up Korean mountain passes.  In October 1952, Pederson received permission to buy a horse for his platoon.  Pederson and stable boy Kim Huk-moon agreed on a price of $250.  Kim cried on watching his “Flame” leave the stable, but the boy’s sister had stepped on a land mine, and needed a prosthetic leg.

The Marines called her “Reckless” – a nod to the weapon system she was meant to serve, and to the fighting spirit of the 5th Marines.

Pederson wrote to his wife in California to send a pack saddle, while Gunnery Sergeant Joseph Latham and Private First Class Monroe Coleman provided for her care and training.

Navy Hospitalman First Class George “Doc” Mitchell provided most of Reckless’ medical care, Latham taught her battlefield skills:  how to step over communication wires, when to lie down under fire, how to avoid becoming entangled in barbed wire.  She learned to run for cover, at the cry “Incoming!”

The platoon built her a bunker and fenced off a pasture, but soon Reckless was allowed 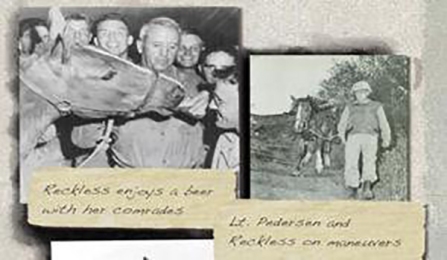 to roam freely throughout the camp.  She’d enter tents at will, sometimes spending the night if it was cold.

She’d eat anything:   bacon, mashed potatoes, scrambled eggs, shredded wheat.  Just about anything else that a Marine wasn’t watching closely enough, as well.  Reckless even ate her horse blanket once, and she loved a beer.  Mitchell had to warn his fellow Marines against giving her more than two Cokes a day, which she’d drink out of a helmet.  Once, she ate $30 worth of winning poker chips.  Reckless was a Marine. 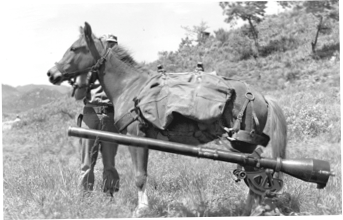 She “went straight up” the first time she heard an RCLR go off, despite being loaded down with six shells.  All four feet left the ground and she came down trembling with fear, but Coleman was able to soothe her.  The second time she snorted.  By the fourth she didn’t bother to look up. She was happily munching on a discarded helmet liner.

Recoilless rifle tactics call for fire teams to fire four or five rounds, and then relocate before the enemy can return fire.  Reckless usually learned the route after one or two trips, often traveling alone to deliver supplies on the way up, and evacuate wounded on the way down. 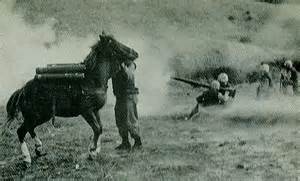 In February 1953, Captain Dick Kurth and his Fox Company were fighting for a hill called “Detroit”.  Reckless made 24 trips by herself, carrying a total 3,500lbs of ammunition over 20 miles.  She made 51 solo trips that March, during the battle for Outpost Vegas.  Reckless carried 9,000lbs of ammunition in a single day, over 35 miles of open rice paddies and steep hills.  At times, artillery exploded around her at the rate of 500 rounds per minute.  She was wounded twice during the battle.  That night, she was too exhausted to do anything but hang her head while they rubbed her down. 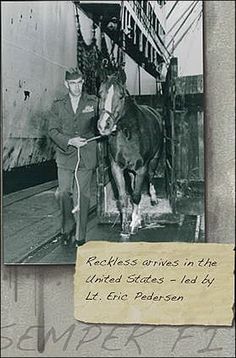 Reckless was the first horse in Marine Corps history to participate in an amphibious landing.  She was wounded twice, and later awarded two Purple Hearts and a Marine Corps Good Conduct Medal.  Her name appears on Presidential Unit citations from the United States and the Republic of Korea.

On August 31, 1959, Reckless was promoted to Staff Sergeant in a ceremony at Camp Pendleton.  1,900 of her 5th Marine comrades attended, as did two of her sons, “Fearless” and “Dauntless”.  A third, “Chesty”, was unavailable to attend.

General Randolph McCall Pate, a veteran of Guadalcanal, Iwo Jima and Korea, served as the 21st Commandant of the Marine Corps, from 1956-1959.  General Pate once wrote “In my career I have seen many animals that have been adopted by Marines, but never in all my experience have I seen one which won the hearts of so many as did. . .Reckless.”

Life Magazine published a collector’s edition in 1997, listing 100 heroes from American history.  Alongside the names of George Washington and Thomas Jefferson, Sally Ride and Abraham Lincoln, was that of a small Mongolian horse.  Sergeant Reckless.