Mao’s “Cultural Revolution” of the late 1960s is estimated to have killed 40 to 70 million Chinese.  You’re really playing in the Big Leagues, when they can’t estimate your death toll to anything closer than the nearest 30 million. 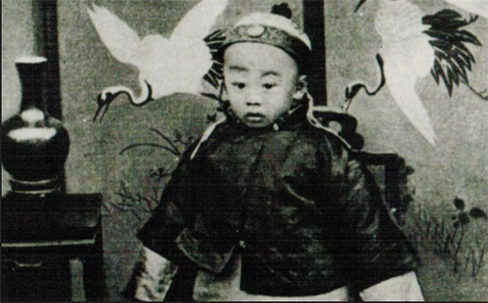 At the age of 2 years and 10 months, Puyi was taken from his parents and installed on the Qing Dynasty throne, in the Chinese Imperial Palace in Beijing.  The year was 1908.

It must have been bewildering for this toddler who was terrified by the sound of the ceremonial drums. Grown men would kowtow and avert their eyes in his presence.  His wet nurse, Wen-Chao Wang, was the only familiar face in the Royal Court.  She was the only one who could console him.  She alone was allowed to accompany him to the Forbidden City.

Puyi’s abdication of the throne four years later marked the end of 1,000 years of dynastic rule in China, earning him the sobriquet “The Last Emperor” of China.

Today, the Tsingtao beer available in Chinese restaurants the world over, is one of the last cultural vestiges of European colonization of China. In the latter half of the 19th century, China became increasingly subjugated through colonization by British, French and German powers.

American President Millard Filmore dispatched Commodore Matthew Perry to Japan in 1852, forcing an opening of that nation’s economy to trade with the West, and commencing a half-century’s period of rapid industrialization in resource-poor Japan. The smaller nation grew in both economic and military power, while China suffered the humiliations of the first and second opium wars, and forced colonization by European interests.

Japan piled on in the First Sino-Japanese War of 1894-95, culminating in the massacre of much of Lüshun City (formerly “Port Arthur”), cession of Chinese territories, and the recognition of an independent Korea.

China declared war on Imperial Germany in August 1917, intending to send combat units to the western front, but never getting around to doing so. The move entitled them to a seat at the Paris Peace Conference, but all that got them was a secret list of 21 demands issued by the Japanese Empire.  Japan emerged from this period with greater influence over the Chinese economy, and increased Japanese control over the resource-rich regions of Northern China and Manchuria.

On September 18, 1931, a small quantity of dynamite was detonated by Japanese Lt. Kawamoto Suemori, near a railroad owned by Japan’s South Manchuria Railway near Mukden, in modern Shenyang.  It was a ruse, a bald pretext for the Japanese invasion of Manchuria in Northern China, and everyone knew it. 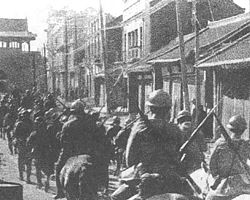 The explosion was so weak that it failed to destroy the line and a train passed minutes later, but the script was already written.  The Imperial Japanese Army accused Chinese dissidents of the “Mukden Incident”, launching a full scale invasion.

Japan installed Puyi as Emporer Kangde of the puppet state of “Manchukuo”, all the while suppressing the native Han Chinese in one of the most brutal and genocidal occupations of the 20th century.

Puyi was kept on a short leash by his Japanese handlers, his life mainly consisting of signing laws prepared by Japan, reciting prayers, consulting oracles, and making formal visits throughout his state.

The Second world war was drawing to a close when the Soviet Union declared war on Japan, beginning its invasion of occupied China two days after the atomic bomb was dropped on Hiroshima, the day before Nagasaki.  Puyi was captured at an airfield on this day in 1945, and held in a Soviet gulag in Siberia until Mao Tse-Tung’s Communist party came to power in 1949.

Puyi spent ten years in the Fushun War Criminals Management Centre in Liaoning province until he was declared “reformed”, moving to Peking in 1959 and taking up residence as an ordinary citizen. 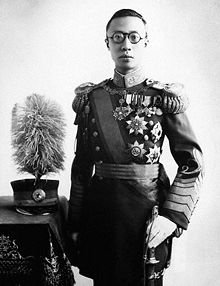 Mao’s “Cultural Revolution” of the late 1960s is estimated to have killed 40 to 70 million Chinese.  You’re really playing in the Big Leagues, when they can’t estimate your death toll any closer than the nearest 30 million.

The Last Emperor was an easy target of the “Red Guards”.  He probably wouldn’t have survived the tender ministrations of the communist government, but he died quietly due to complications of Kidney Cancer on October 17, 1967.

The ashes of the last Emperor, a man who had  found himself at the head of over a half-billion people at a time when the world population was only 2 billion, were placed at the Babaoshan Cemetery, the former burial ground of imperial concubines and court eunuchs.