Throughout the period, the “secret sauce” of Ottoman power was an army of elite infantry called “Janissaries”.  Janissaries were Christian slaves, usually taken as spoils of war, or sold into slavery as children. They came from all over the Ottoman Empire, though the sons of Greek, Bosnian, Serbian and Bulgarian Christians were preferred. Turkic and Jewish boys were never forced to comply with the Janissary system. 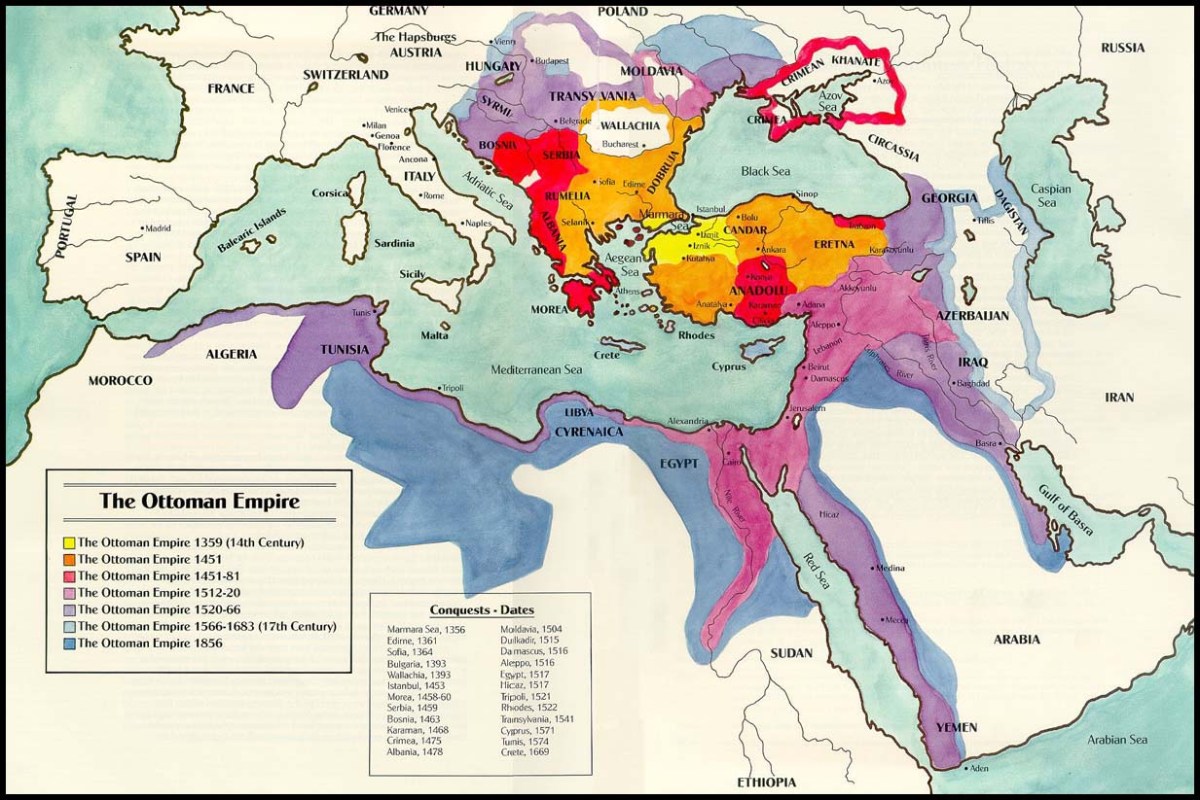 The Anatolian Peninsula is the westernmost point of Asia, forming the northern coastline of the eastern Mediterranean.  Today we call it Turkey.  In the 13th century it was home to a collection of small emirates and Ghazi (Warrior for Islam) principalities, called ‘Beyliks’.

The Turkish tribes united under Osman Bey in 1299 grew to become one of the most powerful forces in history.  A 600-year empire called the Ottomans.

The Ottoman victory at Kosovo in 1389 marked the end of Serbian power in the Balkans.  Christian Europe launched a Crusade six years later, in an effort to relieve the Byzantine capitol of Constantinople, by then virtually all that remained of the eastern Roman Empire.  This, the last of the major Crusades, was crushed at Nicopolis, in modern day Bulgaria.  After the battle, a handful of nobles were held for ransom, those judged to be younger than 20 were sold into slavery.  The rest, as many as 3,000 knights, were bound together in groups of three, and systematically beheaded.  Never again would Greater Europe be altogether free of Islamic influence.

By the 15th century, Ottoman controlled lands surrounded the Byzantine capitol of Constantinople.  The forces of 21-year-old Sultan Mehmed II laid siege to the city in 1453, its ultimate defeat and sack punctuating the end of the Eastern Roman Empire and the birth of the “New City” – Istanbul.

Throughout this period, the “secret sauce” of Ottoman power was an army of elite infantry called “Janissaries”.  Janissaries were Christian slaves, usually taken as spoils of war, or sold into slavery as children. They came from all over the Ottoman Empire, though the sons of Greek, Bosnian, Serbian and Bulgarian Christians were preferred. Turkic and Jewish boys were never forced into compliance with the Janissary system.

Janissaries weren’t free, nor were they common slaves. They were subject to severe discipline, but paid salaries and retirement pensions, forming a distinct social class in Ottoman society. As boys, usually 10 to 12, they were taken from their parents and given to Turkish families to learn the language and customs. They were then enrolled in Janissary training, indoctrinated into Islam, and kept under 24-hour supervision.

Janissaries were prohibited from growing beards and taking up a skill other than war, and were forbidden to marry.

They were an elite slave army, in many ways resembling a modern army.  Janissaries were the first to wear unique uniforms, first to be paid regular salaries for their service, the first to march in cadence, to music. They lived in barracks and made extensive use of firearms, campaigning with their own medical teams of Muslim and Jewish surgeons operating mobile hospitals behind the lines. 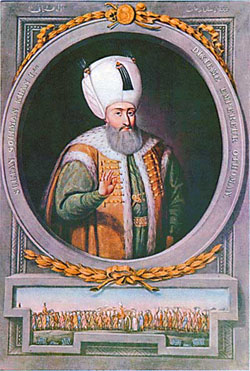 The Ottoman Empire reached the height of its power during the 16th and 17th centuries, under the reign of Suleiman the Magnificent. One of the most powerful states in the world and ruling over 39 million subjects, the Ottoman Empire controlled a territory spanning three continents:  over two million square miles.

Serbia went to war with the Sultan for its independence in 1804, followed closely by Greece. Sultan Selim III attempted to modernize the army, but his reforms were opposed by the religious leadership and by the Janissary corps. Selim’s reforms would cost him his throne and ultimately his life, but internal order was restored in 1826, when Mahmud II put the Janissary Corps down in a bloody “reform”.

The Ottoman Empire then entered a period of decline, from which it would never emerge. Still one of the five continental Great Powers by the turn of the 20th century, the Ottoman Empire was “the Sick Man of Europe”, with its many minority populations pushing for independence.

Loyalty-obsessed to the point of paranoia, Sultan Abdul Hamid II told a reporter in 1890 that he would give his Armenian Christian minority a “box on the ear”.  Hundreds of thousands of Armenians were murdered in the pogroms of 1894-96. 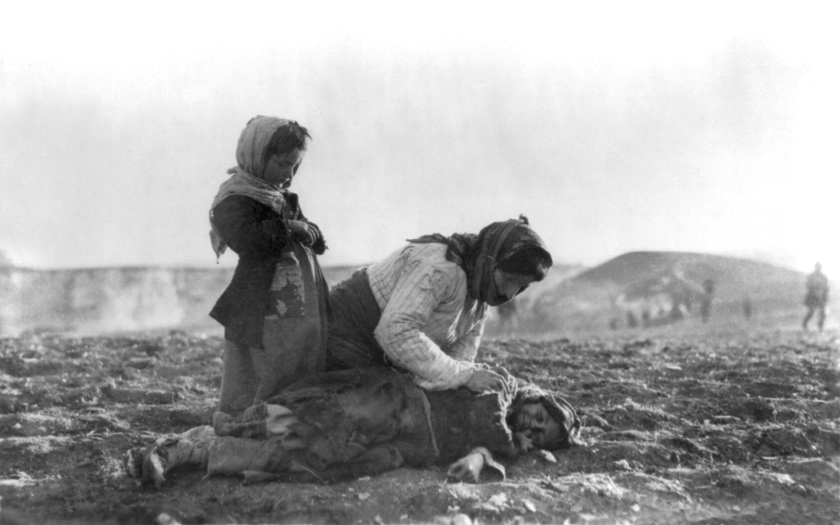 Able bodied males were exterminated outright, or worked to death as conscripted labor.   Women, children, the elderly, and infirm were driven on death marches to the farthest reaches of the Syrian desert.  Goaded like livestock by military “escorts”, they were deprived of food and water, subjected at all times to robbery, rape, and outright murder. By the early 20s, as many as 1.5 million of the Ottoman Empire’s 2 million Armenian Christians, were dead.

The Armenian spyurk, an Aramaic cognate deriving from the Hebrew Galut, or “Diaspora”,  goes back some 1,700 years.  Today, the number of ethnic Armenians around the world tracing lineage back to this modern-day diaspora, numbers in the several millions.

Since 1919, Armenians around the world have marked April 24 as Armenian Genocide Remembrance Day.

To this day, it remains illegal in Turkey, to speak of the Armenian genocide.  The New York Times wouldn’t use the term, until 2004.

This April, President Donald Trump received a furious response from Turkish President Recep Tayyip Erdoğan, for this seemingly-benign statement: “Beginning in 1915, one and a half million Armenians were deported, massacred, or marched to their deaths in the final years of the Ottoman Empire.  I join the Armenian community in America and around the world in mourning the loss of innocent lives and the suffering endured by so many”.

The Ottoman Empire aligned itself with the losing side during WWI, its ultimate disintegration beginning on August 10, 1920, when representatives of Sultan Mehmed VI signed the Treaty of Sèvres.  Future conflicts and treaties would shape and refine the borders, but the “Middle East” as we know it, was borne of the dissolution of the Ottoman Empire. 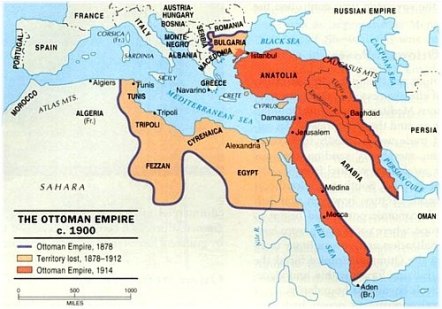 Mustafa Kemal and his “Young Turks” demanded complete independence, the Treaty of Lausanne creating the Republic of Turkey on October 29, 1923.  Kemal became the country’s first president, granted the honorific “Atatürk” (“Father of the Turks”), in 1934.  Multi-party democracy was established in 1946.  Ever since, the Turkish military and judiciary have viewed themselves as defenders of the Kemalist ideals of a secular Turkish state.

Today, the former seat of the Ottoman Empire is 95% Muslim.  The philosophical descendants of Atatürk vie with those of Erdoğan, the modern, constitutionally secular state, versus the fundamentalist theocracy.

Last year, elements of the Turkish military staged the 6th coup since 1960, in opposition to the increasingly Islamist policies of President Erdoğan, a man who once likened democracy to a bus:  It gets you to your destination…then you get off.  One man, one vote, one time.  The coup was put down with a death toll of 265. 3,000 soldiers were arrested, and some 2,700 judges, fired.

As a NATO member, Turkey is privy to some of the US’ most closely held military secrets. Some 50 thermonuclear weapons are housed at Incirlik Air Base, 68 miles from the Syrian border, currently the hottest combat zone, on the planet.  The strategic thinking behind such basing decisions are difficult to understand, at best.  No aircraft currently based in Turkey, is capable of carrying even one of these weapons.

One might wish the history unfolding before our eyes, was more of a political issue, here in the States.