This is no benign ideology we’re talking about, current estimates of citizens murdered by their own government in the Soviet Union alone, range from 8 to 61 million during the Stalinist period.

French Indo-China, the area now known as Laos, Cambodia and Vietnam, was governed as a French Colonial territory since the late 19th century. The region came to be occupied by the Imperial Japanese after the fall of France, at the onset of WWII.  There arose a nationalist-communist army during this period, dedicated to throwing out the Japanese occupier.  It called itself the “League for the Independence of Vietnam”, or “Viet Minh”.

France re-occupied the region following the Japanese defeat in WWII, but soon faced the same opposition from the  army of Ho Chi Minh and Vo Nguyen Giap. What began as a low level, rural insurgency, later became a full-scale modern war when Communist China entered the fray in 1949.

from Vietnam, the Geneva Convention partitioning the country into the communist “Democratic Republic of Vietnam” in the north, and the State of Vietnam in the south, led by Emperor Bao Dai and Prime Minister Ngo Dinh Diem.

Communist forces of the north continued to terrorize Vietnamese patriots in the north and south, with aid and support from communist China and the Soviet Union.

The student of history understands that nothing happens in a vacuum.  US foreign policy is no exception. International Communism had attempted to assert itself since the Paris Commune rebellion of 1871, and found its first major success with the collapse of czarist Russia in 1917.

US policy makers feared a “domino” effect, and with good cause. The 15 core nations of the Soviet bloc were soon followed by Eastern Europe, as Poland, Bulgaria, Romania, Hungary and Czechoslovakia fell into the Soviet sphere of influence. Germany was partitioned into Communist and free enterprise spheres after WWII, followed by China, North Korea and so on across Southeast Asia.

This is no benign ideology we’re talking about, current estimates of citizens murdered by their own government in the Soviet Union alone, range from 8 to 61 million during the Stalinist period. 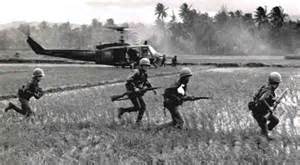 Agree or disagree with policy makers of the time, that’s your business, but they followed a logical thought process. US aid and support for South Vietnam increased as a way to “stem the tide” of international communism, at the same time that French support was pulling back. By the late 50s, the US was sending technical and financial aid in expectation of social and land reform. By 1960, the “National Front for the Liberation of South Vietnam” (“NLF”, or “Viet Cong”) had taken to murdering Diem supported village leaders. JFK responded by sending 1,364 American advisers into South Vietnam in 1961. 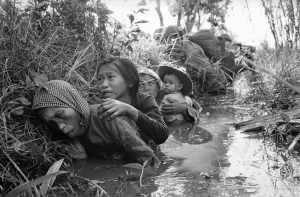 The war in Vietnam pitted as many as 1.8 million allied forces from South Vietnam, the United States, Thailand, Australia, the Philippines, Spain, South Korea and New Zealand, against about a half million from North Vietnam, China, the Soviet Union and North Korea. Begun on November 1, 1955, the conflict lasted 19 years, 5 months and a day. On March 29, 1973, two months after signing the Paris Peace accords, the last US combat troops left South Vietnam as Hanoi freed the remaining POWs held in North Vietnam.

Even then it wasn’t over. Communist forces violated cease-fire agreements before they were signed. Some 7,000 US civilian Department of Defense employees stayed behind to aid South Vietnam in conducting an ongoing and ultimately futile war against communist North Vietnam. 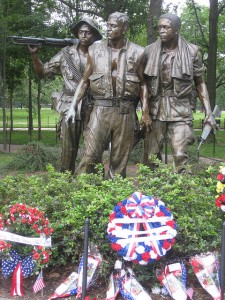 The last, humiliating scenes of the war played themselves out on the roof of the US Embassy in Saigon on April 29 and 30, 1975, as those who could boarded helicopters, while communist forces closed around the South Vietnamese capital.

In the end, US public opinion would not sustain what too many saw as an endless war.  We continue to feel the political repercussions, to this day. I was ten at the time of the Tet Offensive in 1968. I remember feeling horrified at the way some of my fellow Americans conducted themselves. I came to feel at that time as I do to this day, that anyone who has a problem with our country’s war policy, needs to take it up with a politician.  Not a member of the military,

.The “Killing Fields” of Cambodia followed between 1975-‘79, when the “Khmer Rouge”, self-described as “The one authentic people capable of building true communism”, murdered or caused the deaths of an estimated 1.4 to 2.2 million of their own people, out of a population of 7 million. All to build their perfect, agrarian, “Worker’s Paradise”.

Imagine feeling so desperate, so fearful of the alien ideology invading your country, that you convert all your worldly possessions and those of your family to a single diamond, bite down on that stone until it embedded in your shattered teeth, and fled with your family to open ocean in a small boat.  All in the faint and desperate hope, of getting out of that place.  That is but one story among the more than three million “boat people”.  Three million from a combined population of 56 million, fleeing the Communist onslaught in hopes of temporary asylum in other countries in Southeast Asia or China.

They were the Sino-Vietnamese Hoa, and Cambodians fleeing the Khmer Rouge.  Ethnic Laotians, Iu Mien, Hmong and other highland peoples of Laos.  The 30 or so Degar (Montagnard) tribes in the Central Highlands, so many of whom had been our steadfast allies in the late war.  Over 2.5 million of them were resettled, more than half to the United States.  The other half went mostly to Canada, Europe and South Pacific nations.   A half-million were repatriated, voluntarily or involuntarily.  Hundreds of thousands vanished in their attempt to flee.

The humanitarian disaster that was the Indochina refugee crisis was particularly acute between 1979-’80, but reverberations continued into the 21st century.  The last boat people were repatriated from Malaysia in 2005.  Thailand deported 4,000 Hmong refugees in 2009.

There were 57,939 names inscribed on the Vietnam Memorial Wall, the day it opened in 1982. Over the years, the names of military personnel who succumbed to wounds sustained in the war, were added to the wall. As of Memorial Day 2015, there are 58,307.