Here’s where the story becomes Really interesting. The last words “Et tu Brute” were put in his mouth by Shakespeare, 1,643 years after the fact.

The history of Rome may be drawn into two parts, the Republic and the Imperium. Since 509BC and the overthrow of the Monarchy, the Republic operated based on separation of powers, checks and balances, and a strong aversion to the concentration of power. Except in times of national emergency, no single individual could wield absolute power over his fellow citizens.

A series of civil wars and other events changed that in the 1st century BC.  The Republic was dead by the 30s BC, leaving Imperial Rome in its wake, best remembered for its long line of Emperors.

Gaius Julius Caesar was born into this chaos, a son of the prestigious Julian Clan. In 82BC, the 18-year-old Caesar survived the “proscriptions” of the Dictator Sulla, in which the names of as many as 4,700 “enemies of the state” were nailed to the wall of the Roman Forum. Any man thus proscribed was immediately stripped of citizenship and all its protections. Anyone killing a proscribed man was entitled to keep part of his estate, the rest going to the government.  Rewards were paid for information leading to the death of anyone thus proscribed. 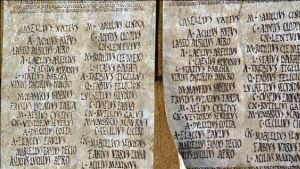 At the age of 25, Caesar was kidnapped and held for ransom by Cilician pirates, a group which may be described as the Isis of its time. Caesar laughed on learning that his ransom was set at only 20 talents of silver, and demanded they hold out for 50.  He would yell at this band of killers for talking too loud while he was trying to sleep. He’d write poetry and read it to them, calling them “savages” if they were insufficiently appreciative of his work.

For 38 days, Caesar joined in their games and exercises.  As if he were their leader, instead of their prisoner.  Caesar promised these pirates that he would come back and crucify them all, and he said it with a smile.

The pirates thought it uproariously funny, but Caesar was as good as his word. The fifty talents were raised, and the captive was released.  He made good on his promise, raising a force sufficient to enforce his will and bringing his former captors to Rome.  There he had them all crucified, but not without a moment of kindness.  Caesar style.  He slit their throats, ending the ordeal of crucifixion by hours, if not days.

Caesar lost his hair at an early age, about which he was self-conscious. It’s probably why we see him depicted with the wreath on his head, but baldness didn’t seem to bother the women in his life. Caesar seems to have been quite the ladies’ man, having a son with none other than Queen Cleopatra of Egypt. One story has him being handed a note while speaking at the Senate. Caesar’s arch rival Cato (the younger) demanded to know the contents of the letter, loudly accusing him of complicity in the “Catiline Conspiracy” to overthrow the government. At last Caesar relented, reading out loud what turned out to be a love letter – a graphic one – written to him by Cato’s own half-sister Servilia Caepionis.

Caesar rose through the ranks, organizing a coalition of three to rule the Republic. It was the first such “Triumvirate”, combining the popular general Pompey “The Great”, Crassus, the wealthiest man in all of Rome, and the rising young general and politician Julius Caesar.

The partnership was doomed to fail, given the egos and animosities of the three. Crassus was killed in 52BC as Pompey became increasingly hostile to his co-ruler, who was then on campaign in Gaul.  A string of military successes against Celtic and native Germanic tribes caused Caesar’s popularity to soar, posing a threat to the power of the Senate and to Pompey himself.

The Senate ordered him to resign his command and disband the army, or become an enemy of the state.  Everyone knew what it meant when Caesar crossed the Rubicon River at the head of that army, in 49BC. It meant Civil War. To this day, to “Cross the Rubicon” means to take a step which cannot be reversed.

Caesar emerged victorious, declaring himself Dictator for Life, the first time such a title had ever been made permanent. Nothing was more repugnant to traditional Roman sensibilities, than the idea of a dictator for life. Caesar’s days were numbered.

According to Plutarch, Julius Caesar arrived at the Senate on March 15, 44BC. Tillius

Cimber presented him with a petition, as Senators crowded around. Cimber grabbed the Emperor’s shoulders and pulled down his tunic. “Ista quidem vis est!” said Caesar, “Why, this is violence!” Casca pulled a dagger and stabbed at the dictator’s neck. Caesar turned and caught him by the arm. “Casca, you villain, what are you doing?” Frightened, the Senator shouted “Help, brother!” in Greek “adelphe, boethei!” In seconds the entire group was striking at the dictator. Caesar attempted to get away but, blinded by his own blood, he tripped and fell. The men continued stabbing at him as he lay defenseless on the steps of the portico. According to Eutropius, 60 men participated in the assassination. Caesar was stabbed 23 times, though only one wound was fatal.

Here’s where the story becomes Really interesting. The last words “Et tu Brute” were put in the Dictator’s mouth by Shakespeare, 1,643 years after the fact. No eyewitness account of his assassination survives today, though a more contemporary source recorded the Greek words “Kai su, teknon?” as Brutus plunged the dagger in. “You too, my child?”

Marcus Junius Brutus (the younger) was the son of the same Servilia Caepionis, above. Brutus was 41 at the time of the assassination, Caesar 56. It is unlikely though not impossible, that Brutus killed his father that day. The affair between Brutus’ mother and Caesar, had carried on for years.