Another letter asked for Goizueta’s autograph, since the signature of “one of the dumbest executives in American business history” would probably become valuable in the future. 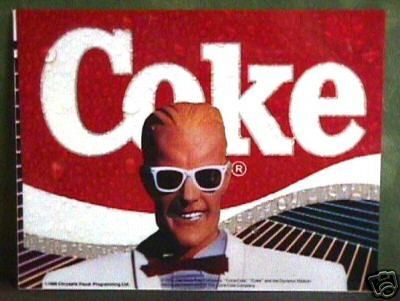 Europeans long believed that natural mineral waters held medicinal qualities, and favored the beverages over often polluted common drinking water. British chemist Joseph Priestley invented a means of carbonating water in 1772.  Jacob Schweppe’s Geneva, Switzerland company was bottling the stuff by the 1780s. The first soda water manufacturer in the US was Yale University chemist Benjamin Silliman in 1807, though it was Joseph Hawkins of Baltimore who secured the first US patent in 1809. 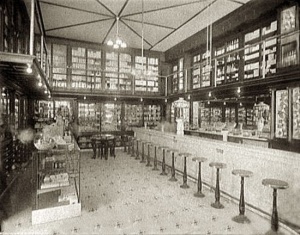 At first sold for their therapeutic value, consumers increasingly bought carbonated beverages for refreshment. By the time of the Civil War, “soft drinks” were flavored with ginger, vanilla, fruits, roots, herbs, and countless other flavorings. The first cola drink appeared in 1881.

Confederate Cavalry officer John Stith Pemberton was wounded by a saber slash across his chest at the Battle of Columbus, Georgia. Like many wounded veterans, he became addicted to the morphine given him to help ease the pain. A chemist in civil life, Pemberton experimented with painkillers to take the place of opiates, landing on a combination of the coca plant and kola nut in 1886. Vicksburg, Mississippi pharmacist Joseph Biedenharn installed bottling equipment in the back of his soda fountain, selling the first bottles of Coca Cola on March 12, 1894.

The most famous rivalry in the soft drink business began in the 1930s, when Pepsi offered a 12oz bottle for the same 5¢ as Coca Cola’s six ounces.

The Coca Cola Company’s flagship brand had a 60% share by the end of WWII, but that declined to less than 24% by the early 80s, most of the difference lost to Pepsi and their “Pepsi challenge” blind taste test promotions of the late 70s.

By the 80s, market analysts believed that baby boomers were likely to switch to diet drinks as they aged, and any growth in the full calorie segment was going to come from younger consumers who preferred the sweeter taste of Pepsi.

Roberto Goizueta came on board as Coca Cola Company CEO in 1980, saying that there would be 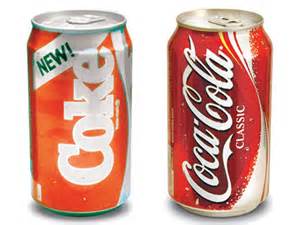 “no sacred cows” among their products. He meant it. The company launched the top secret “Project Kansas”, to test and perfect the flavor for a new version of Coke. The company’s marketing department fanned out, holding taste tests, surveys, and focus groups.

Early results were favorable, the newer, sweeter mixture overwhelmingly beating both Pepsi and Coke itself. Most tasters said that they would buy the product, but a small minority of 10–12% were angry and alienated at the very thought of it. This small percentage was adamant. They would stop drinking Coke products altogether, and they frequently swayed other members of their focus groups.

The way things turned out, the company should have listened to this group a little more carefully.

On an April Friday in 1985, Coke let the media know that a major announcement was coming the following Tuesday. Coca Cola officials spent a busy weekend preparing for the re-launch, while Pepsi Executives announced a company-wide holiday, taking out a full page New York Times ad proclaiming that “Pepsi had Won the Cola Wars”.

Skepticism was high on the day of the Big Announcement. Reporters were fed questions by Pepsi officials, and Goizueta fumbled, refusing to state the reason for the change. He certainly wasn’t going to give Pepsi any credit for their performance in taste tests, explaining “[It’s] smoother, uh, uh, rounder yet, uh, yet bolder…a more harmonious flavor”.

The backlash was soon in coming, and closely tracked earlier focus group results. Atlanta based Coca Cola’s southern customers described the change as another surrender to the “Yankees”. Over 400,000 calls and letters came into company headquarters, including one addressed to “Chief Dodo, The Coca-Cola Company”.  Another letter asked for Goizueta’s autograph, since the signature of “one of the dumbest executives in American business history” would probably become valuable in the future. A psychiatrist hired by Coke to listen in on calls, told executives some people sounded as if they were discussing the death of a family member. 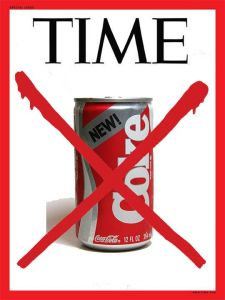 Even Max Headroom and his “C-c-c-catch the wave!” couldn’t save the company. Ads for “New Coke” were booed at the Houston Astrodome, while Pepsi ran ads in which a smiling first-time Pepsi drinker said “Now I know why Coke did it!”

Even Fidel Castro weighed in, calling the change a sign of capitalist decadence. Company President Donald Keough realized it was over, on a visit to the Mediterranean Principality of Monaco. A small restaurant owner proudly said that he had “the real thing, it’s a real Coke,” offering Keough’s party a bottle of the old stuff.

And so it was that, in 1985, Coca Cola announced that they’d bring back their 91-year old formula. A reporter asked Keough if the whole thing had been a publicity stunt. Keough’s answer is itself, a classic. “We’re not that dumb,” he said, “and we’re not that smart”.