Today, to call someone “Neanderthal” is to insult him as a stupid brute.  It appears that our cousin was nothing of the sort.

In the 17th century, the German Reformed Church teacher and hymn writer Joachim Neander liked to hike a valley outside of Düsseldorf. The beauty of nature was inspirational, clearing his mind and inspiring verses like:

“See how God this rolling globe/swathes with beauty as a robe…
Forests, fields, and living things/each its Master’s glory sings.”

The theologian contracted tuberculosis and died at the age of thirty.  And yet he lived on in a way, in the valley which came to bear his name.

Some 200 years later, three years before Charles Darwin published the Origin of Species, workers quarrying limestone in the Neander Valley discovered an unusual skull.  This was no ordinary head, elongated and nearly chinless as it was, with heavy ridges over the eyes.  Heavy bones were found alongside  which fitted together, albeit oddly.

From top, clockwise: a) Neander Valley by Friedrich Wilhelm Schreiner, oil on cardboard, 1855, b) original bones discovered the following year, and c) Artist’s conception of what he looked like, H/T Artist: Kennis & Kennis Reconstructions

The state of archaeological science had much to learn in 1856.  Who knows, 22nd century historians and scientists may look back and say the same thing about us.  At the time, even to discern fossils from ordinary rock was beyond the ability of many scientists.

Scholars of the day had no shortage of theories. This was a lost Cossack, a bowlegged rider suffering from rickets, a painful condition resulting in weak and misshapen bones. To some, the life of pain resulting from such a condition made perfect sense, the bony eye ridges resulting from perpetually furrowed brow. 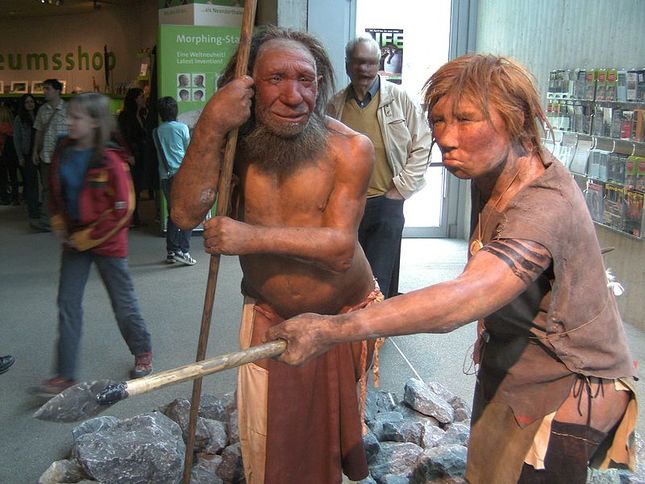 British geologist William King suspected something radically different. This was no aberrant human being nor even a lost ancestor. This was a member of a long lost branch of humanity.   An extinct but parallel species to our own.  King published a paper in 1864 hypothesizing his idea of an evolutionary dead end, naming the long lost species after the poet who had once wandered the valley in which it was discovered. 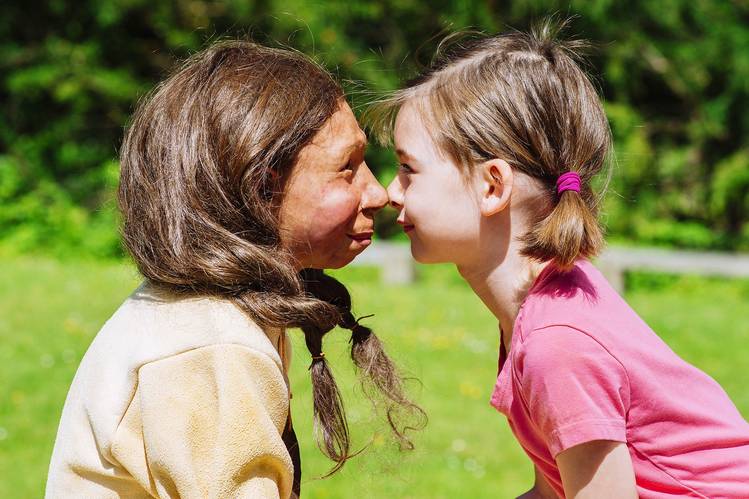 Today, to call someone “Neanderthal” is to insult him as a stupid brute.  It appears that our cousin was nothing of the sort.

The hyoid bone at the floor of the mouth serves as a connecting-point for the tongue and other musculature, giving humans the ability to speak. A delicate structure likely to be lost in most fossilized specimens, the first Neanderthal hyoid was only discovered in 1989.

Neanderthal bodies were suited to the ice age of the early and middle Paleolithic era, shorter in stature and more robust, considerably more powerful than Cro-Magnon, our direct ancestor and all but indistinguishable from ourselves.

Neanderthal emerged on the Eurasian landmass, about 300,000 years ago.  The average female stood 5′ – 5’1″ and weighed 140-pounds, the average male about five inches taller and weighing in at 172. 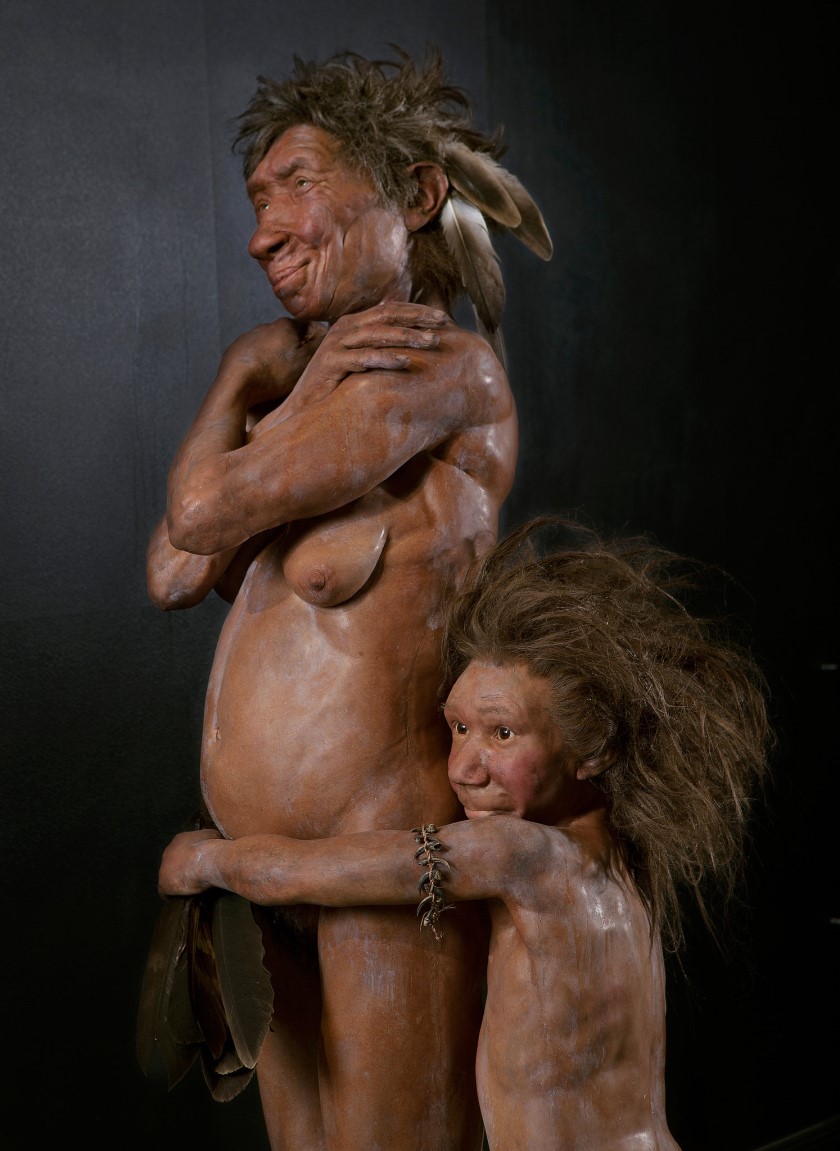 Neanderthal possessed  a brain only slightly smaller than Cro-Magnon, walked upright, formed and used simple tools and controlled fire.  They even buried their own dead, at least sometimes.  Some researchers theorize that they built boats and sailed the Mediterranean.  Imperfectly formed tools and weapons found alongside more sophisticated specimens even suggest he educated his children.

Despite all that, Neanderthal was an evolutionary dead end and not our ancestor, though he did “coexist” for about 5,000 years with our Cro-Magnon forebears.  The two even bred together and produced children, sometimes, the first such encounter taking place on this day, fifty thousand years ago.

Whether the happy couple had Barry White or Marvin Gaye playing in the cave, is lost to history.

Alright, I made that part up, but not the “coexist” part.  Our modern ancestors migrated from the African continent some 50,000 years ago, resulting in that first hookup somewhere on the Eurasian landmass.  It was far from the last.

Several years ago, Vanderbilt University Geneticists compared a genome-wide map of Neanderthal haplotypes, with a database of some 28,000 modern adults of European and Asian ancestry. The 2016 study published in the journal Science, reported that modern day Eurasians carry between 1½% to 4% of Neanderthal DNA.

The study went on to postulate a range of traits relevant to disease risk in modern humans and linked back to Neanderthal DNA, including those which influence depression, obesity, mood disorders, skin disease and addiction.

The idea isn’t as strange as it sounds. Last year, Sir Richard Branson was in the news, claiming  he’d looked into his family ancestry. Forty generations back, turns out Branson is related to Charlemagne.  It’s no big deal, according to Geneticist Adam Rutherford. Speaking at the Chalke Valley History Festival, Rutherford explained: “Literally every person in Europe is directly descended from Charlemagne. Literally, not metaphorically. You have a direct lineage which leads to Charlemagne,” adding “Looking around this room, every single one of you … is directly descended between 21 and 24 generations from Edward III.”

Edward III of England exited this world a mere 689 years ago.  The time from which the last Neanderthal left the stage was fifty times that span.

If you have European or Asian ancestry, the following traits might be a sign of your inner Neanderthal:

The “Occipital Bun” (I have one of those) is a knot of rounded bone, believed to have once anchored the massive neck and jaw muscles of Neanderthal. 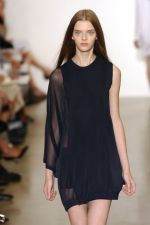 The naturally large eyes of individuals such as Ukrainian model Masha Tyelna are believed to have been useful to Neanderthal, making their way in the dim light of northern latitudes.  In fact, Neanderthal may have used more brain power processing visual input:  an evolutionary disadvantage compared with early modern humans.

One mutation in the main gene for hair color appears to come from Neanderthal, including a spectrum of red hair from auburn to carrot top to strawberry blond. Two to six per cent of modern Europeans have red hair, compared with 0.6%, worldwide. Red hair is much more prevalent in the British Isles. 10% to 13% of Irish and Scottish respectively have red hair, while 30% (Scotland) and 46% (Ireland) carry the gene.

I remember, before it turned gray, my beard was a screaming shade of red.

Freckles?  Fair skin is more efficient at producing vitamin D from weak sunlight, an advantage for those living at northern latitudes. Freckles result from clusters of cells which overproduce melanin granules, triggered by exposure to sunlight. Freckles are found in a wide range of skin colors and ethnicity, but are most prevalent on fair complexions. It is a Neanderthal gene most common in Eurasians, among whom 70% are believed to carry the gene.

Having evolved for hundreds of thousands of years on the Eurasian landmass, Neanderthals developed the Human Leukocyte Antigen (HLA) receptor, a gene complex responsible for immune system response to local pathogens. While the HLA receptor conferred an immunity advantage on modern humans, it rendered us more susceptible to a range of autoimmune conditions from Lupus to Crohn’s disease to increased risk for cancer and type 2 Diabetes.

Perhaps calling someone ‘Neanderthal’ isn’t such an insult, after all.  Maybe, there’s one peering out from the bathroom mirror.