“She had been robbed of her part of history…It’s like the train has left the station and you’re standing there and there’s nothing you can do because you’re 95 and no one listens to your story.”

Following the German invasion of Poland in 1939 and the outbreak of general war in Europe, President Franklin Delano Roosevelt proclaimed a limited national emergency, authorizing an increase in Regular Army personnel to 227,000 and 235,000 for the National Guard. Strong isolationist sentiment kept the United States on the sidelines for the first two years, as victorious German armies swept across France.

That all changed on December 7, 1941, with the Japanese attack on the Pacific naval anchorage at Pearl Harbor. Seizing the opportunity, Nazi Germany declared war on the United States, four days later.

The Roosevelt administration had barely found the keys to the American war machine in February 1942, when disaster struck with the fall of Singapore, a calamity Prime Minister Winston Churchill called the “worst disaster” in British military history.

The mobilization of the American war machine was a prodigious undertaking. From that modest beginning in 1939, the Army alone had 5.4 million men under arms by the end of 1942. By the end of the war in 1945, American factories produced a staggering 296,000 warplanes, 86,000 tanks, 64,000 landing ships, 6,000 navy vessels, millions of guns, billions of bullets, and hundreds of thousands of trucks and jeeps. US war production exceeded that of the Axis powers of Germany, Italy, and Japan, combined.

As all that manpower mobilized to fight the war, women moved into the workforce in unprecedented numbers.  Nearly a third of a million women worked in the American aircraft industry alone in 1943:  65% of the industry’s workforce, up from just 1% in the interwar years. 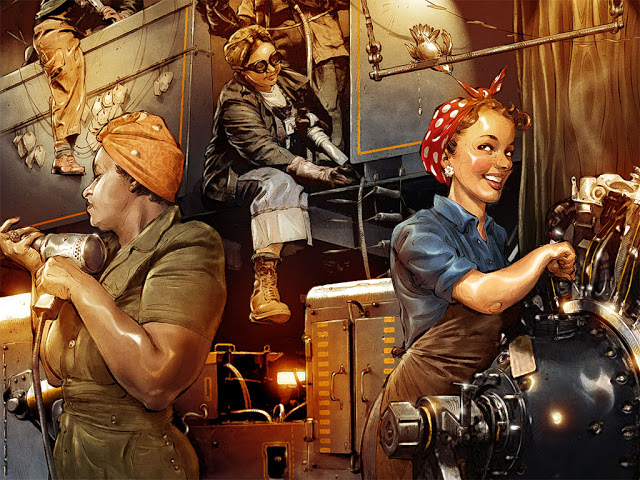 All told, some six million women answered the call, expanding the female participation in the overall workforce from 27%, to 37%.

The mythical “Rosie the Riveter” first appeared in a song written by Redd Evans and John Jacob Loeb and made famous by swing bandleader James Kern “Kay” Kyser, in 1943.  The song told of a munitions worker who “keeps a sharp lookout for sabotage / Sitting up there on the fuselage…Rosie’s got a boyfriend, Charlie.  Charlie, he’s a Marine / Rosie is protecting Charlie Working overtime on the riveting machine”.

Norman Rockwell had almost certainly heard the song when he gave Rosie form for the cover of that year’s Memorial Day Saturday Evening Post.  Posed like the Prophet Isaiah from Michelangelo’s Sistine Chapel, Rockwell’s “Rosie” is on lunch break, riveting gun on her lap, a beat-up copy of Mein Kampf ground happily under foot.

Vermont Dental Hygienist Mary Doyle Keefe was the model for Rockwell’s Rosie.  The propaganda value of such an iconic image was unmistakable, but copyright rules limited the use of Rockwell’s portrait.  The media wasted no time in casting a real-life Rosie the Riveter, one of whom was Rose Will Monroe, who worked as a riveter at the Willow Run aircraft factory, in Ypsilanti Michigan.  Rose Monroe would go on to appear in war-bond drives, but the “Real” Rosie the Riveter, was someone else.

The year before the Rosie song came out, Westinghouse commissioned graphic artist J. Howard Miller to produce a propaganda poster, to boost company morale.  The result was the now-familiar “We Can Do It” poster, depicting the iconic figure flexing her biceps, wearing the familiar red & white polka dot bandanna.

Though she didn’t know it, Miller’s drawing was based on a photograph of California waitress Naomi Parker Fraley, who worked in a Navy machine shop in 1942.

For many years, it was believed that a Michigan woman, Geraldine Hoff Doyle, was the “real” Rosie the Riveter.  Hoff Doyle had seen the uncaptioned image, and believed it to be herself.  It was an innocent mistake. The woman bears a striking resemblance to the real subject of the photograph.

Thirty years came and went before Parker-Fraley even knew about it.  She saw herself in a newspaper clipping, and wrote to the paper around 1972, trying to set the record straight.  Too late. Hoff Doyle’s place had been cemented into popular culture, and into history.

Another thirty-eight years would come and go before Seton Hall Communications Professor James J. Kimble, Ph.D., took an interest in the identity of the famous female from the WW2 poster. Beginning in 2010 and lasting nearly six years, the search became an obsession. It was he who discovered the long lost original picture with photographer’s notes identifying Naomi Parker-Fraley. “She had been robbed of her part of history,” Kimble said. “It’s so hurtful to be misidentified like that. It’s like the train has left the station and you’re standing there and there’s nothing you can do because you’re 95 and no one listens to your story.” 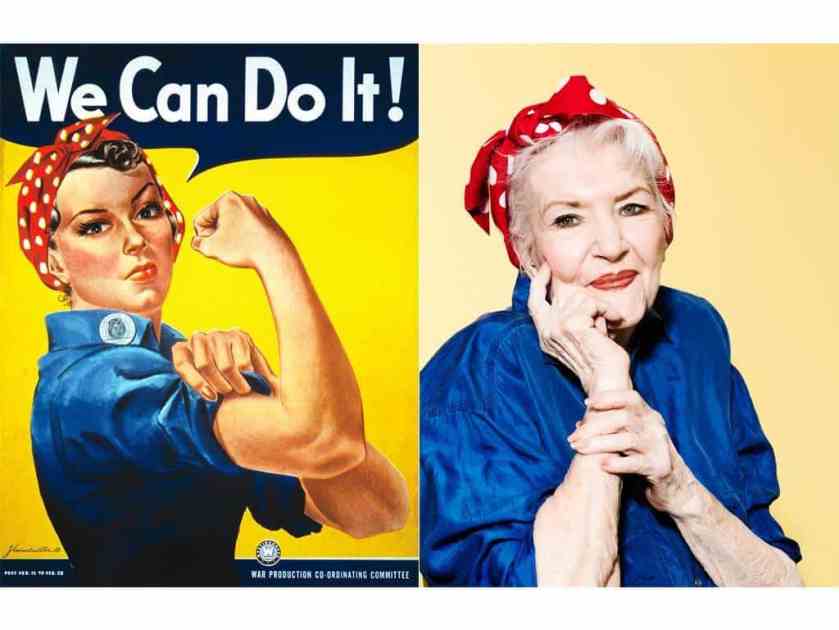 Over the years there have been many Rosie the Riveters, the last of whom was Elinor Otto, who built aircraft for fifty years before being laid off at age ninety-five.  Naomi Parker-Fraley knew she was the “first”, but that battle was a long lost cause until Dr. Kimble showed up at her door, in 2015.  All those years, she had known.  Now the world knew.

Hat tip “BoredPanda.com”, for a rare collection of colorized images from the WW2 era, of women at work.  It’s linked HERE.