“Standing as I do in view of God and Eternity, I realise that patriotism is not enough, I must have no hatred or bitterness towards anyone”. – Edith Cavell, October 11, 1915 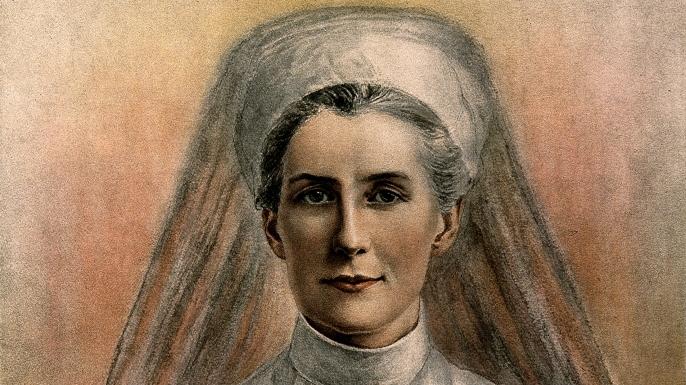 As a little girl growing up in Swardeston, Norfolk, Edith Cavell was no saint.  Nor was she a “bad girl “.  Just a normal kid, growing up in Victorian England.   The daughter of a Vicar of the Church of England, she thought her father’s sermons were ‘boring’. Even so, she would hold her Christian faith until the day she died.

Reverend Frederick Cavell was something of a Puritan and nearly ruined the family finances, building the vicarage with his own money.  Yet, this was no crabbed and dour man of the cloth.  He was easily tempted into roaring like a bear and chasing the three Cavell sisters and their brother about the house, to squeals of children’s laughter.

A gifted artist, Edith loved to paint and draw, the birds, flowers and even fellow villagers, frequent subjects. She and her sister once painted and sold cards to finance a new room in their father’s Sunday school, raising the impressive sum of £300.

As a young woman, she once danced until her feet bled, and destroyed a new pair of shoes, in the process.

Edith worked a number of jobs as governess, including one in Brussels, Belgium.  The children under her care remembered her as wonderfully kind and always smiling, and great fun to be with.

On Summer breaks she’d return to Swardeston, where she loved to play tennis, and to paint.  It was there that she cared for her father in 1895, nursing the parson through a brief illness.  Reverend Cavell recovered, but the experience convinced Edith, she was cut out for a career in nursing.

Following training at Royal London Hospital, Edith worked a number of positions, rising through the ranks and becoming matron of Queen’s District Nursing Homes, in 1906. The following year, Edith returned to Brussels at the request of Dr. Antoine Depage, to nurse a child patient under his care. That October, Depage opened the nursing school ‘L’École Belge d’Infirmières Diplômées’ based in his Berkendael Institute, and asked Edith to run it.

In 1913, Cavell’s educational program was producing exceptionally qualified professional nurses, providing for the staffing needs of three hospitals, 24 communal schools and 13 kindergartens. When Queen Elizabeth of Belgium fell and broke her arm, one of Edith’s nurses was personally requested, to provide her care.

On top of it all. she was still giving four lectures a week to doctors and nurses, and still finding time to care for a friend’s daughter who was addicted to morphine, providing for a runaway girl, and for her two dogs, Don and Jack. 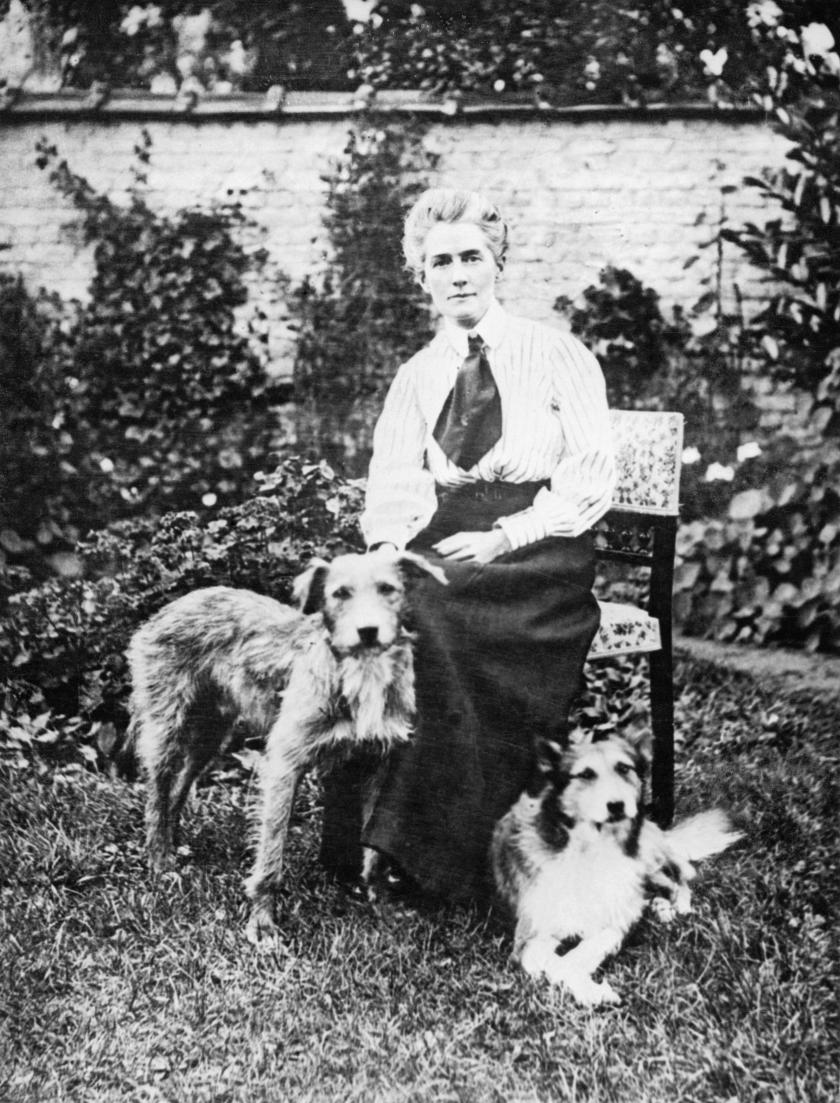 In June 1914, a tubercular nineteen-year-old named Gavrilo Princip murdered the heir-apparent to the dual monarchy of the Austro-Hungarian Empire, in Sarajevo. As diplomats bungled their way through the “July Crisis” of 1914, Edith returned to Norfolk, to visit with her now widowed mother. She was pulling weeds from the garden on August 1, when she learned that Austro-Hungarian troops had invaded Serbia.

Entangling alliances and mutual distrust drew a continent into war in the days that followed, as Edith returned to Brussels, feeling her nursing skills were now needed, more than ever.

German soldiers invaded and occupied Brussels later that August, and the wounded came pouring into Edith’s clinic.  The International Red Cross took over the hospital at this time, the neutral organization established to care for the wounded of all nationalities.  Medical personnel were strictly forbidden from taking sides.  Edith cared for all who needed her services, regardless of uniform or nationality.

The German violation of Belgian neutrality was an outrageous provocation, the single cause for which England entered the war.  German troops were afraid of Belgian guerrilla fighters, the francs-tireurs, believing them to be every bit as dangerous, as the French soldiers they were fighting. Allied propaganda magnified tales of German brutality into the “Rape of Belgium”, but such atrocities against civilians were very real, particularly in places like Liège, Andenne, Leuven and foremost, Dinant.

The Battle of Mons of August 23 was a crushing defeat for the badly outnumbered British Expeditionary Force (BEF), the first such confrontation on European soil since the Battle of Waterloo, in 1815. Hundreds of British and allied soldiers were cut off and stranded, behind enemy lines. Word got back to the Red Cross hospital about allied soldiers being shot by German troops, while locals took others into their homes to hide them from harm.

That September, Edith took in two British soldiers, hiding them for two weeks in her clinic.  She was later asked to join an underground organization, dedicated to hiding these stranded soldiers and spiriting them across borders into neutral territories.  Despite the danger to herself, she agreed.  She was now in violation of the law.

For the rest of 1914 until the following September, Edith hid 200 stranded soldiers at the Berkendael Institute, while architect Philippe Baucq secretly organized their evacuation to neutral Holland.

Now enters this story, a name which must be remembered with the likes of Judas Iscariot,  Ephialtes of Trachis and Vidkun Quisling, as Traitor.  Five years later, Georges Gaston Quien would be tried and convicted by Parisian authorities of collaborating with the enemy, and put to death.  Quien had betrayed Edith Cavell’s organization, to German secret police.

Baucq was arrested on July 31, 1915, with another member of the escape-route team.  Letters found in their possession incriminated Edith Cavell and she was arrested, on August 5.  German interrogators tricked her into confession, claiming that they knew everything, already.  The best thing she could do, was save her friends.  Confess.

She was placed in solitary confinement for the rest of that month, and tried for treason, in early October.  At trial, Edith freely confessed to helping allied soldiers escape German occupied territory. 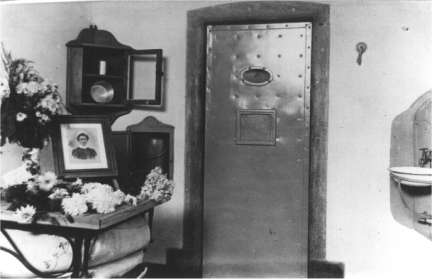 Edith Cavell was convicted of treason on October 11, 1915, along with Philippe Baucq, and three others. The sentence was death. Neutral governments in the United States and Spain protested, and attempted to get the sentence reduced. Such efforts came to nothing.

The English chaplain Stirling Gahan visited her cell on the last day of her life, and found her calm, as she received the Sacrament.  “I am thankful to have had these 10 weeks of quiet to get ready”.  she told him.  “Now I have had them and have been kindly treated here. I expected my sentence and I believe it was just. Standing as I do in view of God and Eternity, I realise that patriotism is not enough, I must have no hatred or bitterness towards anyone”.

Her final words were as worthy, as those of that hero of the American Revolution, Nathan Hale, who regretted only that he had but one life to give for his country.  In the last moments of her life, she calmly spoke to the German Lutheran prison chaplain, Paul Le Seur.  “Ask Father Gahan to tell my loved ones later on that my soul, as I believe, is safe, and that I am glad to die for my country.”

Edith Louisa Cavell was executed by firing squad at 2:00am on October 12, at the Tir National shooting range, in Schaerbeek.  She was forty-nine.

Hat tip to www.edithcavell.org.uk, from which I have learned much of this story, and drawn many of these images.