“…Steadfast, in Freedom’s Cause, we’ll live and die,
Unawed by Statesmen; Foes to Tyranny,
But if oppression brings us to our Graves,
and marks us dead, she ne’er shall mark us Slaves” 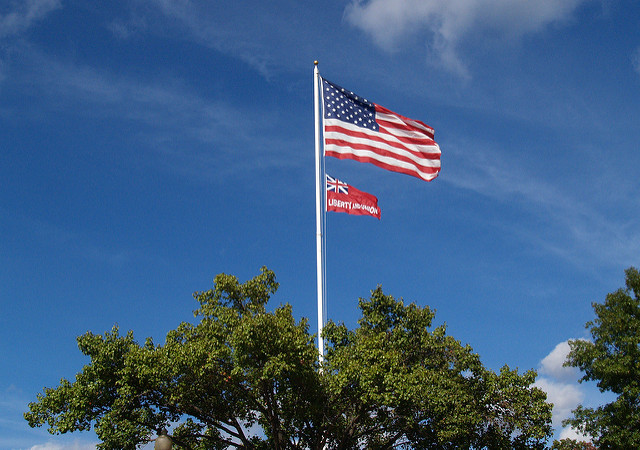 The Mayflower set sail from England on September 6, 1620, and fetched up on the outer reaches of Cape Cod in mid-November, near the present-day site of Provincetown Harbor.

One was born over those 66 days at sea, another died.  They were 101 in all, including forty members of the English Separatist Church, a radical Puritan faction who felt the Church of England hadn’t gone far enough, in the Protestant Reformation.

There the group drew up the first written framework of government established in the United States, 41 of them signing the Mayflower Compact on board the ship on November 11, 1620.

With sandy soil and no place to shelter from North Atlantic storms, a month in that place was enough to convince them of its unsuitability. Search parties were sent out and, on December 21, the “Pilgrims“crossed Cape Cod Bay and arrived at what we now know, as Plymouth Harbor.

Fully half of them died that first winter but the rest hung on, with assistance from the Grand Sachem Massasoit (inter-tribal chief) of the Wampanoag confederacy, in the form of the emissaries, Samoset and Squanto. The Mayflower returned to England in April 1621, with half its original crew.

Three more ships arrived in Plymouth over the next two years, including the Fortune (1621), the Anne and the Little James (1623). Those who arrived on these first four ships were known as the “Old Comers” of Plymouth colony, and were given special treatment in the affairs of “America’s Home Town”.

A short seventeen years later, members of the Plymouth Colony founded the town of Taunton twenty-four miles inland, and formally incorporated the place on September 3, 1639.

In 1656, the first successful iron works in Plymouth Colony and only the third in “New England” was established in Taunton, on the Two Mile River. The Taunton Iron Works operated for over 200 years, until 1876.

The town was once home to several silver smithing operations, including Reed & Barton, F.B. Rogers, and Poole Silver. To this day, Taunton is known as the “Silver City”.

Taunton also has the distinction of flying what may have been the first distinctly American flag, in history.

First raised above the town square on October 19, 1774, the flag’s canton featured the Union Jack, on the blood red field of the British Red Ensign. The Declaration of Independence lay two years in the future for these people.  They were, after all, still British subjects.

Between hoist and fly ends were written the words “Liberty and Union”, a solemn declaration that the colonies were going to stick together, and that their rights as British citizens, were not about to be violated.

Not so long as they had something to say about it.

On October 21, 1774, the Taunton Sons of Liberty raised the flag 112-feet high on a Liberty Pole, and tacked the following inscription on that pole:

“Be it known to the present,
And to all future generations,
That the Sons of Liberty in TAUNTON
Fired with Zeal for the Preservation of
Their Rights as Men, and as American Englishmen,
And prompted by a just Resentment of
The Wrongs and Injuries offered to the
English Colonies in general, and to
This Province in particular,
Through the unjust Claims of
A British Parliament, and the
Machiavellian Policy of their fixed Resolution
To preserve sacred and inviolate
Their Birth-Rights and Charter-Rights,
And to resist, even unto Blood,
All attempts for their Subversion or Abridgement.
Born to be free, we spurn the Knaves who dare
For us the Chains of Slavery to prepare.
Steadfast, in Freedom’s Cause, we’ll live and die,
Unawed by Statesmen; Foes to Tyranny,
But if oppression brings us to our Graves,
and marks us dead, she ne’er shall mark us Slaves”.

The Taunton flag is considered to be among the oldest distinctly American flags if not the oldest, in history. The city officially adopted it on October 19, 1974, the 200th anniversary of the day it was first raised above Taunton green. Stop and see it if you ever get by.   It’s there on the Liberty Pole, directly beneath the Stars and Stripes of the Star Spangled Banner.

.If you enjoyed this “Today in History”, please feel free to re-blog, “like” & share on social media, so that others may find and enjoy it as well. Please click the “follow” button on the right, to receive email updates on new articles.  Thank you for your interest, in the history we all share.