Twenty years before the “Lost” English colonists first landed at Roanoke, Pedro Menendez de Aviles founded St. Augustine, in the Spanish colony of Florida. Aviles’ colonial expedition included many black Africans, both free men and slaves, who remained a part of St. Augustine society, from that time forward. The first recorded birth in the New World of an American child of African descent took place in 1606, according to St. Augustine Catholic parish records.  A year before the English settlement, at Jamestown. 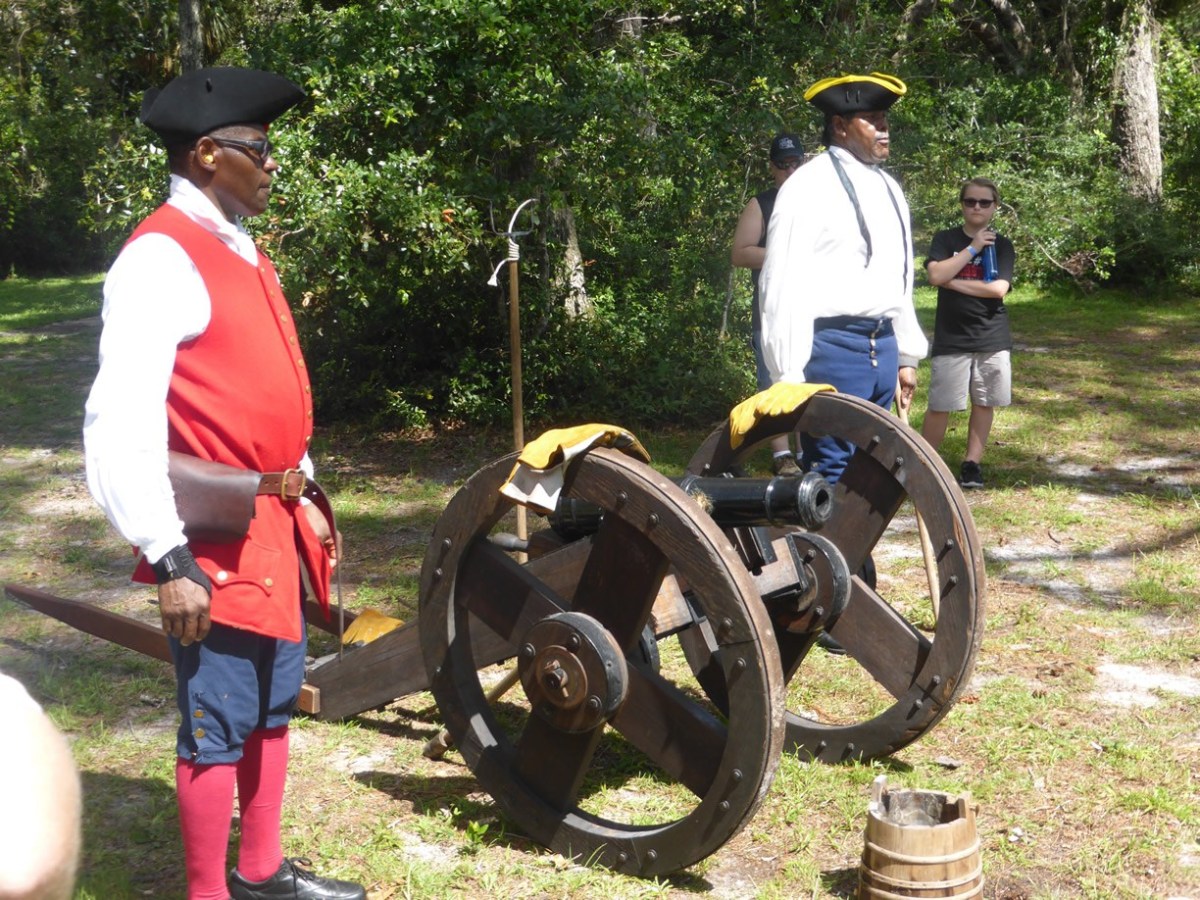 From the earliest period of the “new world”, every economy from Canada to Argentina was, to varying degrees, involved with slavery. Spanish and Portuguese settlers brought the first African slaves to the Americas in 1501, establishing the new world’s first international slave port in Santo Domingo, modern capital city of the Dominican Republic.

Hundreds of thousands of African slaves entered the Americas through the sister ports of Veracruz, Mexico, and Portobelo, Panama, “products” of the “Asiento” system, wherein the contractor (asientista) was awarded a monopoly in the slave trade to Spanish colonies, in exchange for royalties paid to the crown.

The first such contractor was a Genoese company which agreed to supply 1,000 slaves over an 8-year period, beginning in 1517. A German company entered into such a contract eight years later, with a pledge of 4,000.

By 1590, as many as 1.1 million Africans had come through the port of Cartagena, Colombia, sorted and surnamed under the “casta de nación” classification system.

In the American colonies, 17th century attitudes toward race appear to have been more fluid than they would later become. The first black Africans, 19 of them, came to the Virginia Colony in 1619 not as slaves, but as indentured servants. Their passage, involuntary as it was, was paid for by a term of indenture, a sort of ‘temporary slavery’, usually lasting seven years.

John Punch ran away from his term of indenture along with two Europeans, in 1640. The trio was captured in Maryland and sentenced to extended terms of indenture. Alone among the three, Punch was punished with indenture for life, effectively making him the first African ‘slave’ in the American colonies.

Meanwhile, black Africans both enslaved and free, had arrived in the north American colonies, for nearly a hundred years. 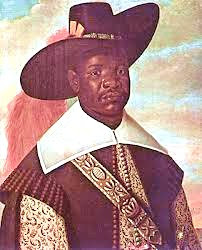 Juan Garrido moved from the west coast of Africa to Lisbon, Portugal, possibly as a slave, or perhaps the son of an African King, sent for a Christian education.  Be that as it may, Garrido came to the new world a free man in 1513, with Juan Ponce de León.  A black Conquistador who spent thirty years with the conquest, “pacifying” (fighting) indigenous peoples and searching for gold, and the mythical fountain of youth.

He was not alone. Other black Africans entered Spanish society as free men, and joining the conquest as soldiers. Some did so in exchange for freedom, some for land, official jobs, or public pensions.  Ponce was fatally injured by a native arrow in 1521.  Garrido went on to marry and settle in Mexico city, where he is credited with the first commercial cultivation of wheat, in the new world.

Twenty years before the “Lost” English colonists first landed at Roanoke, Pedro Menendez de Aviles founded St. Augustine, in the Spanish colony of Florida. Aviles’ colonial expedition included many black Africans, both free men and slaves, who remained a part of St. Augustine society, from that time forward. The first recorded birth in the New World of an American child of African descent took place in 1606, according to St. Augustine Catholic parish records.  A year before the English settlement, at Jamestown.

The Spanish government in Florida began to offer asylum to slaves from British colonies as early as 1687, when eight men, two women and a three year old nursing child arrived there, seeking refuge.  It probably wasn’t as altruistic as it sounds, given the history.  The primary interest seems to have been disrupting the English agricultural economy, to the north.

The Florida governor required only that such runaways convert to Catholicism, and then he put the men to work for wages.

In 1693, King Charles of Spain officially proclaimed that runaways would find freedom in Florida, provided that they would convert to Catholicism and perform four years of service to the Crown. Spain had effectively created a maroon colony (from the Spanish word cimarrón, meaning “fugitive, runaway”, literally “living on mountaintops”), forming a front-line defense against English attack, from the north.

Fort Mosé was the first legally sanctioned free black settlement, in what would become the United States. 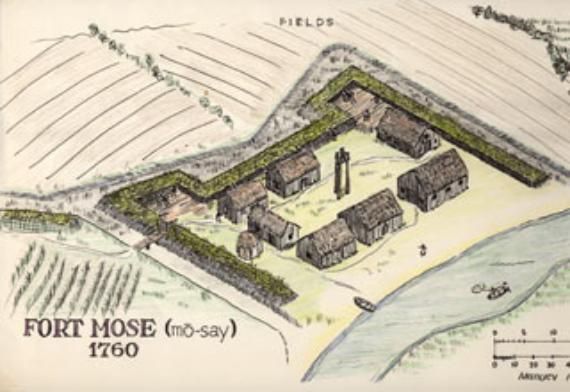 Long before the famous “underground railroad”, the first such track pointed not north, but south, to St. Augustine.  Word of the settlement reached into Georgia and South Carolina to the north, attracting escaping slaves. It was probably the “final straw” that set off the unsuccessful 1739 slave insurrection known as the Stono Rebellion, in which several dozen runaway slaves attempted to reach Spanish Florida.

In the early phase of the War of Jenkins Ear, Fort Mosé was abandoned and occupied by General James Oglethorpe, colonial governor of Georgia, along with a force of British colonial rangers, Scottish Highlanders, enslaved black auxiliaries and native Creek and Uchise allies. 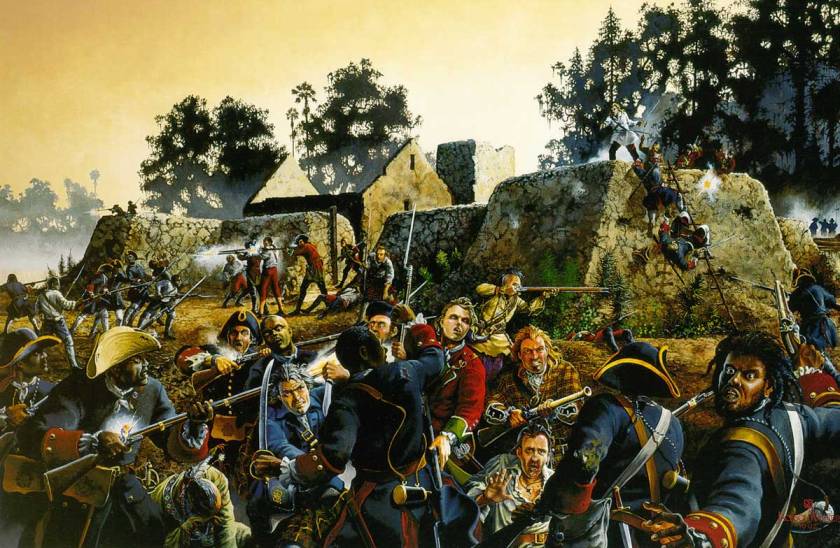 The British garrison was caught by surprise in the pre-dawn hours of June 16, 1740 and all but annihilated, by a force of Spanish soldiers, free black militia and native Yamasee allies.  The coquina fortification was destroyed in the process, and would not be rebuilt until 1752.

In June of this year, Florida Living History, Inc. and the Fort Mosé Historical Society presented the latest in a series of re-enactments, celebrating the 277th anniversary of the “Bloody Battle of Fort Mosé “.  The site has seen several archaeological excavations in recent years, and is considered the “premier site on the Florida Black Heritage Trail.”  Fort Mosé was officially designated an Historic State Park on October 12, 1994.