Years earlier, German Chancellor Otto von Bismarck had said the next European war would be started by “Some damn fool thing in the Balkans”. Bismarck got his damn fool thing on June 28, 1914, when future Emperor Franz Ferdinand came to Sarajevo, the capital of the Balkan province of Bosnia-Herzegovina.

In 1914, Austria-Hungary was a kaleidoscope of fifteen distinct ethnic groups speaking at least that many languages.  Ostensibly a constitutional union between the Empire of Austria and the Kingdom of Hungary, the dual monarchy was in fact divided, sometimes sharply, along no fewer than six religious lines.

Since the 1889 suicide of his cousin Crown Prince Rudolf, the only son of Emperor Franz Josef, Franz Ferdinand, was the Heir Presumptive to the Austro-Hungarian throne.

Sophie Maria Josephine Albina Chotek von Chotkow und Wognin was a minor noble in the Kingdom of Bohemia, a small figure in a constellation of 19th century European royalty.  It’s uncertain when Sophie and Franz first met and fell in love, but their relationship caused a royal scandal. The future Queen of the Habsburg Dynasty was expected to hold suitable rank. Only a Princess of one of Europe’s dynastic families would do, certainly no Bohemian Countess.

Ferdinand wrangled with the Royal Court in Vienna for a year before the couple was permitted to marry, but only under hard and humiliating conditions. Theirs was a “morganatic” marriage.  A marriage of unequals.

Three days before the wedding, June 28, 1900, Franz was forced to sign and publicly declare Sophie to be his morganatic wife, never to bear the titles of Empress, Queen or Archduchess. Any children produced by the marriage would neither inherit nor be granted dynastic rights or privileges of any kind. The Imperial family didn’t even show up at the wedding.

In a world where rank was everything, Sophie was never permitted to appear beside her husband in public.  She was humiliated at every court function, relegated to last place and made to stand in line behind every Archduchess, Princess and Countess from Vienna to Budapest.

June 28 was significant for another reason. The invading army of Ottoman Sultan Murad I was wiped out on this date in the 1389 Battle of Kosovo, (June 15, ‘old style’), the “Field of Blackbirds”. It was a Pyrrhic victory, as the Balkan defenders were virtually wiped out as well. The Ottomans being far more numerous, the Balkan states soon became vassals of the Ottoman Turks.

The Encyclopedia Britannica describes “Balkanization” as “fragmentation of ethnic groups”.  The Balkans form a geographic and political region, including 13 southeastern European nations from Slovenia to Greece. Located at the crossroads of east and west, the region has been subjugated and re-subjugated since the 6th century BC conquests of Persian King Darius the Great. The Balkan wars of 1912-1913 wrested some (but not all) of the area back from Ottoman control, as a newly enlarged Serbia pushed for greater independence and alliance among south Slavic peoples.

Years earlier, German Chancellor Otto von Bismarck had said the next European war would be started by “Some damn fool thing in the Balkans”. Bismarck got his damn fool thing on June 28, 1914, when future Emperor Franz Ferdinand came to Sarajevo, the capital of the Balkan province of Bosnia-Herzegovina.

Morganatic marriage was unknown in Hungarian law and custom.  This trip was a rare opportunity for the couple to openly travel together.  A “place in the sun” for Ferdinand’s wife, Sophie.

Ironically, Franz Ferdinand favored a more federalized model for the Empire, with greater autonomy for all its provinces. That wasn’t enough for the radical Serbian nationalists of the “Black Hand”, who inserted seven assassins along the route which the Archduke was scheduled to travel.

They were a carpenter, a printer, a teacher and four students. The oldest was 27. All suffered from tuberculosis, all armed with revolvers, crude bombs, or both, and a cyanide capsule with which to commit suicide if captured.

The six car motorcade drove by the first assassin, Muhamed Mehmedbašić, a little after 10am. He froze, allowing the cars to pass unmolested.

Riding along the Appel Quay, the motorcade passed the second assassin, Nedeljko Čabrinović, who threw his bomb at the open car. The driver sped away as the bomb went off under the wheel of the fourth car, wounding two occupants and a dozen spectators. Meanwhile, Čabrinović popped his cyanide pill and jumped into the Miljacka River, expecting to die. The cyanide just made him retch and the river was but a few inches deep, so the would-be assassin was soon in police custody.

The motorcade sped on to a planned reception at City Hall, passing three more assassins, Vasco Cubrilovic, Danilo Ilic and Cvijetko Popovic, none of whom did anything. There followed a sort of dark comedy, when Ferdinand jumped out of the car, incandescent with rage. Addressing Fehim Effendi Curcic, the mayor of Sarajevo, Ferdinand shouted “One comes here to visit and is received with bombs. Mr. Mayor, what do you say? It’s outrageous!” Unaware of what had happened, Mayor Curcic began to read his prepared remarks: “Our hearts are filled with happiness…”

Ferdinand later insisted on visiting the wounded at hospital, though he begged Sophie to stay behind. She wouldn’t have it. The Military Governor of the province, Oskar Potiorek, assured them of safe passage. Sophie would remain by her husband’s side. 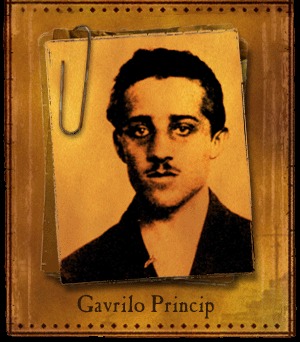 Soon they were off, speeding by the sixth assassin, Trifko Grabez, before he could react. Taking a wrong turn onto Franz Josef Strasse, the chauffeur realized his error and came to a stop before turning around. They were 8’ from the seventh and last assassin, Gavrilo Princip. Princip was in point blank range in two steps, firing once into Sophie’s side and once into the neck of the Archduke.

Archduke Franz Ferdinand’s jugular had been severed by the bullet. “For heaven’s sake, what’s happened to you?” she cried, before slipping to the floor of the car. “Sophie dear, Sophie dear, don’t die. Stay alive for our children.”  Asked if he was alright, Franz Ferdinand was already fading away. “Es ist nichts; Es ist nichts…” (It is nothing; it is nothing…). By 11:30, both were dead.

The mad act of a tubercular 19-year led to a series of diplomatic missteps and military mobilizations and counter-mobilizations called the “July Crisis of 1914″, culminating in the “War to End all Wars” that August.  There is virtually no part of 20th century history, that would ever be the same.