It’s a fairy tale, to some degree, but at least parts of the story appear to be historically accurate. The part about the rats was added 200 years later and the magic flute is a little hard to believe, but the town of Hamelin part is real enough.

We’re all familiar with the fairy tale of the Pied Piper of Hamelin. The village was overrun with rats, they hired a magical piper to lead them out of town and drown them in the river.  The mayor reneged on the deal when the piper came looking for payment.  On the 26th of June, 1284, the piper retaliated, using his skills to lead the village’s children away.  130 children were never seen again.

It’s a fairy tale, to some degree, but at least parts of the story appear to be historically accurate. The part about the rats was added 200 years later and the magic flute is a little hard to believe, but the town of Hamelin part is real enough.

The first entry in Hamelin’s chronicles reads, “It is 100 years since our children left”. That was written in 1384. There was a stained glass window in the Church in Hamelin, installed around 1300, featuring a colorful figure leading several children dressed in white. The window was destroyed in 1660, but we have detailed descriptions dating from the 14th to the 17th centuries.

There is little agreement concerning the facts of the story. The figure of the piper could be merely a symbol of the children’s death by plague or some other catastrophe. Or it could be some charismatic figure like Nicholas of Cologne, who led tens of thousands of children away on the “children’s crusade” against the infidel, in 1212.  Most of them were never seen again. Nicholas himself died on the return trip home.  Villagers were so angry over the loss of their children that they lynched the boy’s father. 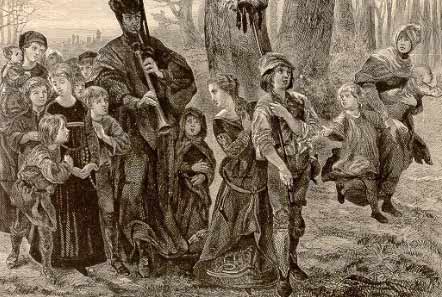 Another theory has it that children were recruited to move east. Eastern Europe became open for German settlement after the defeat of the Danes at the Battle of Bornhoved in 1227. The Bishops and Dukes from Lower Saxony and Westphalia sent out “Locators”:  glib, medieval recruitment officers who offered rich rewards to anyone willing to move east to the Baltic region.

Linguistics professor Jurgen Udolph has tracked all the family names that he could find from the Hamelin of 1284, and started searching for matches elsewhere. He claims that the same surnames occur with amazing frequency in Priegnitz and Uckermark, forming a straight line from north central Germany through Berlin to the former Pomeranian Region in what is now Poland, a distance of some 400 miles.