It was the age of the automobile, and all manner of roadside attractions sprang up to serve the burgeoning tourist business. There were teepee-shaped motels, frozen custard stands, Indian curio shops, and reptile farms.

In 1857, President James Buchanan appointed Lieutenant Edward Beale to survey and build a 1,000-mile wagon road from Fort Defiance, New Mexico to the Arizona/California border. The survey continued an experiment first suggested by Secretary of War and future President of the Confederate States of America Jefferson Davis, in the use of camels as draft animals.

The camel part turned out to be a flop, but the road building was not.  Beale’s wagon trail went on to become the western end of “America’s Main Street”.  Route 66.

The “Mother Road” became an official part of the national highway system in 1927. It was yet to be paved, when the US Highway 66 Association held a “Bunion Derby” in 1928.  It was a footrace from Los Angeles to Madison Square Garden, a distance of 3,423½ miles. Naturally, the LA to Chicago leg ran along Route 66.

Andy Hartley Payne, an Oklahoma Cherokee runner won the race in 573 hours, 4 minutes and 34 seconds. 11th place finisher Harry Abrams ran the race in the opposite direction the following year, becoming the only person to twice run across the continental United States.

The 1932 Summer Olympics in Los Angeles and the westward migration of the “Dust Bowl” era increased the number of “Mom & Pop” service stations, restaurants, and motor courts, springing up to serve the needs of passing motorists.

The road was fully paved by 1938, passing through the Painted Desert on the way by the Grand Canyon and Meteor Crater in Arizona. The golden age of the automobile had dawned.  All manner of roadside attractions popped up to serve the burgeoning tourist business, there were teepee-shaped motels, frozen custard stands, Indian curio shops, and reptile farms.

Meramec Caverns outside of St. Louis put their advertising on barns, calling themselves “Jesse James hideout”. The Big Texan sold a 72-ounce steak dinner, making it free to anyone who could eat the whole thing in an hour.

The fast-food industry was born on Route 66, when Sheldon “Red” Chaney built Red’s Giant Hamburg in Springfield, Missouri.  Believed to be the first drive-through restaurant in the country, the name was supposed to be “Red’s Giant Hamburger“.  Chaney had to cut the two bottom letters off his sign, when the city refused to raise the telephone wires.

Patrick McDonald opened “The Airdrome” restaurant on Route 66 in 1937, near the Airport in Monrovia, California. Hot dogs were some of the first items he ever sold. Ten cent hamburgers were added later, along with all-you-can-drink orange juice for five cents. Three years later, McDonald’s two sons Maurice and Richard (“Mac” and “Dick”) moved the entire building 40 miles east, to San Bernardino, calling the place “McDonald’s Bar-B-Que”.

General Eisenhower came out of WWII with an appreciation for the German highway system, the Autobahn, and signed the Interstate Highway Act as President in 1956. It was the beginning of the end for Route 66. New highway construction began to bypass town centers, and once-thriving Mom & Pops began to die off.

By the mid-50s, Missouri upgraded its sections of US 66 to four lanes, by-passing town centers and the businesses that went with them.

Illinois widened US 66 from Chicago to the Mississippi River. By 1957, virtually the entire Missouri-Kansas-Oklahoma stretch was replaced by 4 lane toll roads. You could see the old 66 as you drove parallel to it, but travelers rarely stopped. 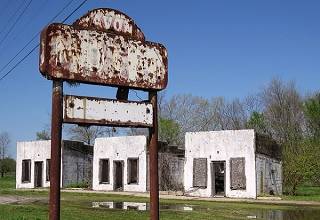 The last parts of Route 66 were decertified by state highway and transportation officials on this day in 1985.  In some cities, the old road is now the “Business Loop”.  It’s been carefully preserved in many areas, and abandoned in others.

Today, most of the old attractions are gone.  You couldn’t drive the old Route 66 from Chicago to LA if you wanted to, but you could get close.  You only need to plan ahead.