A potential animal arms race got no further than that single letter from the King of Siam, but it makes the imagination run wild. What would War Elephants have looked like, at Gettysburg? 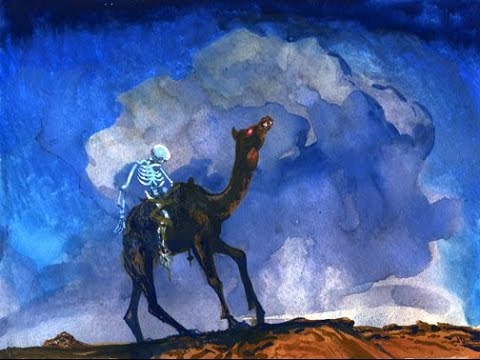 Long before Jefferson Davis became President of the Confederate States of America, he was a young Army Officer who was approached with the idea of using camels as pack animals. To Davis, the beast’s ability to survive in the desert, its massive strength and great stamina, made him wonder if this wasn’t the weapon of the future.

Twenty years later, then-US Secretary of War Jefferson Davis ordered the creation of the First United States Camel Corps. Major Henry Wayne was sent to Turkey to acquire 62 of the beasts, along with trainers who could teach US soldiers how to properly handle and care for camels.

The camels arrived on May 14, 1856, and set out for the newly established Camp Verde in Kerr County Texas, with elements of the US Cavalry and 7 Turkish & Arab handlers.

Major Wayne became an enthusiastic salesman for the camel program, putting on demonstrations for cavalry groups. He’d order what seemed an impossible load to be placed on a kneeling camel, and then step back and frown, “concerned” that he might have overdone it. Mule drivers would smirk and jab each other with their elbows – now he’s done it – and then he would step forward and pile on more weight. On command, the camel would stand up and stroll away, entirely unconcerned. 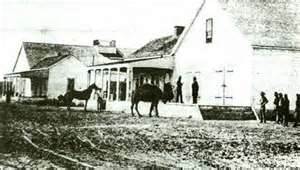 One of the Turks, a man named Hadji Ali, (“Hi Jolly” to the soldiers), established a successful breeding program while stationed at Camp Verde, but the program was not without problems. Camels don’t play well with other pack animals, and they don’t accept the whips and prods that were used to drive horses and mules. They tend to retaliate. A cranky camel will spit in your face or rake your skin off with their teeth if given the chance, and they can turn and charge in a manner that’s terrifying.

Camp Verde had about 60 camels when Civil War broke out in 1861. The King of Siam seems to have been the only man who grasped the military advantage to the Confederacy. Seeing a business opportunity, he wrote to President Abraham Lincoln, saying “here, we use elephants”. It seems that Lincoln never responded to the King’s overture.  A potential animal arms race got no further than this single letter, but it makes the imagination run wild.  What would War Elephants have looked like, at Gettysburg? 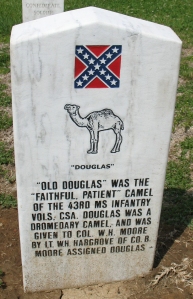 Some of Camp Verde’s camels were sold off, one was pushed over a cliff by frustrated cavalrymen. Most were simply turned loose to fend for themselves. Their fates are mostly unknown, except for one who made his way to Mississippi in 1863, where he was taken into service with the 43rd Infantry Regiment. “Douglas the Confederate Camel” was a common sight throughout the siege of Vicksburg, until being shot and killed by a Union sharpshooter. Lieutenant Colonel Robert Bevier of the 5th Regiment, Missouri Confederate Infantry was furious, enlisting six of his best snipers to rain down hell on Douglas’ killer. Bevier later said of the Federal soldier “I refused to hear his name, and was rejoiced to learn that he had been severely wounded.”

The Apache wars were drawing to a close in 1883, but southeastern Arizona could still be a dangerous place. Renegade bands of Apache were on the move, and isolated ranches were in a constant state of siege.

Two men rode out to check on their livestock one day, leaving their wives at the ranch with the kids. One of the women went down to the spring for a bucket of water while the other remained in the house with the children. Suddenly there was a terrifying scream, and the dogs began to bark. The woman inside saw what she described as a huge, reddish beast, being ridden by a devil. 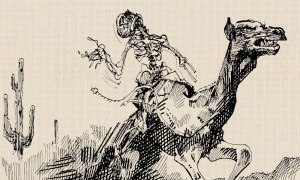 men to return. The pair returned that night and found the body of the other woman by the stream. She’d been trampled almost flat, with huge, cloven hoof prints in the mud around her body and a few red hairs in the brush.

Gold prospectors awakened in the night a few days later, as their tent crashed down around them to the sound of thundering hoofs. They clawed their way out of the mess and saw a huge beast, much larger than a horse, run off into the moonlight. The next day, they too found red hairs in the brush.

The stories became more fantastic and more terrifying with each telling, one man claiming that he personally saw the beast kill and eat a grizzly. Another claimed that he had chased the “Red Ghost”, only to have it vanish before his eyes.

A few months later, a Salt River rancher named Cyrus Hamblin spotted the animal while rounding up cows. It was a camel, and Hamblin saw that it had something that looked like the skeleton of a man tied to its back. Nobody believed his story, but a group of prospectors fired on the animal several weeks later. Though their shots missed, they saw the animal bolt and run, and a human skull with some parts of flesh and hair still attached fell to the ground. 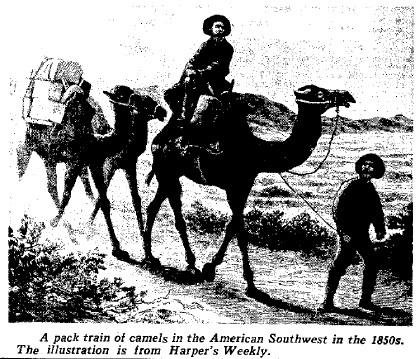 There were further incidents over the next year, mostly at prospector camps. A cowboy near Phoenix came upon the Red Ghost while eating grass in a corral. Cowboys seem to think they can rope anything with hair on it, and this guy was no exception. He lashed the rope onto the pommel of his saddle, and tossed it over the camel’s head. The angry beast turned and charged, knocking horse and rider to the ground. As the camel galloped off, the astonished cowboy could clearly see the skeletal remains of a man lashed to its back.

The beast last appeared nine years later in the garden of a rancher. He aimed his Winchester and fired, dropping the animal with one shot. On the back of the poor, tormented beast was the body of a man, tied down with heavy rawhide straps that cruelly scarred the animal’s flesh. The story of the Red Ghost ends here. How the body of a man came to be tied to its back, remains a cruel mystery.