All told, Irena Sendler saved about 2,400 Jewish children and infants and about 100 teenagers, who went into the forests to join partisan bands fighting the Nazis. The far better known Oskar Schindler is credited with saving less than half that number. 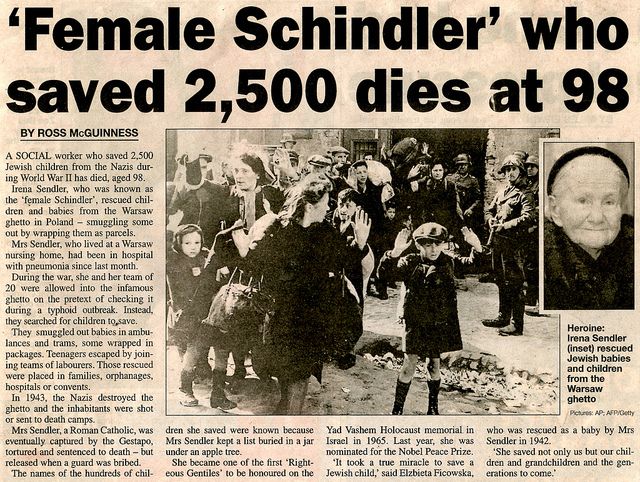 Dr. Stanislaw Krzyżanowski was a physician treating mostly the poorer Jewish families in the central Polish town of Otwock, 14 miles southeast of Warsaw.   He had once said to his only daughter Irena:  “If you see someone drowning, you must save them.” “But, what if I can’t swim?” she asked. “Nevertheless, you must try”.

Overwhelmed by the typhus epidemic of 1917, Dr. Krzyżanowski contracted the disease himself and died that February, but his example guided his daughter for the rest of her life.  Jewish community leaders showed their gratitude by offering to pay for Irena’s education, but her mother declined.

Irena (Krzyżanowski) Sendler was a nurse living outside Warsaw, when Nazi Germany invaded Poland in 1939.  The Nazis gathered up every Jew they could find in 1940, penning 400,000 or more up in the city. Soon, the Warsaw ghetto became the scene of suffering, disease and starvation. Knowing the Nazis feared nothing so much as Typhus, Sendler took advantage of their fears and obtained permission to begin work in the ghetto.

She would travel there daily, and soon started to smuggle Jewish babies out in the bottom of a medical bag.  She’d place soiled bandages around and over sedated babies, to keep guards from looking too closely. She carried a burlap sack in the back of her truck. Sometimes she’d use that or even a coffin to smuggle larger children and even teenagers out of the ghetto, other times leading them out through cellars or sewers.

Sendler traveled with a small a dog she had trained to bark at Nazi soldiers letting her in and out of the gates. They wanted nothing to do with her small, yappy dog, and the barking would cover any sounds that the babies might make.

She would make as many as three runs a day, taking out as many as 6 children. Most of them were already orphans by this time, their parents murdered by the Nazi regime.  Many times, parents gave up their children in order to save them.

Irena coded the names of these children onto two slips of paper, including false and real names.  These she buried in glass jars under a tree in the yard of a friend. She obtained false papers for each of the kids, passing them along to nunneries, monasteries and to foster parents.

Elzbieta Ficowska was smuggled out in a carpenter’s toolbox at the age of six months.  ‘When I was 17″, she said, “a friend said she’d heard I was Jewish. At that point, my Polish mum told me the truth, giving me a silver spoon engraved with my name and birth date, which my blood family had placed in the box with me.   Elzbieta later learned that her family wept on hearing she was to be baptized, but later signaled their understanding by sending a christening gown and tiny gold cross.  “I consider both my Polish mum and Irena to be a little pathological. It is a kind of insanity to overcome such fear. They were so alike, my mum and Irena – fantastic, strong women”.

Anna Mieszkowska, the author of Sendler’s Polish biography, tells a story.  ‘Irena told me not to put this story in the book. She was asked to save two children, a boy and a girl. The parents wanted them to go but the grandparents did not. Irena arrived at their address and found the whole family had committed suicide – grandparents, parents, children. She had nightmares about this for many years.’

Sendler was caught by the Gestapo in 1943, betrayed by a colleague under torture, and by a nosy landlady.  Nazi interrogators beat her savagely, but she never gave up any of those names.

Irena lasted 100 days in Pawiak prison, a place where average inmate survival was less than a month.  Finally she was returned to the Gestapo and stood against a wall for execution, too broken to care. An SS guard said “not you” and shoved her out into the street. He’d been bribed by her friends, and was himself later caught and executed. For now she was “officially” dead, which made it easier to escape detection for the remainder of the war. 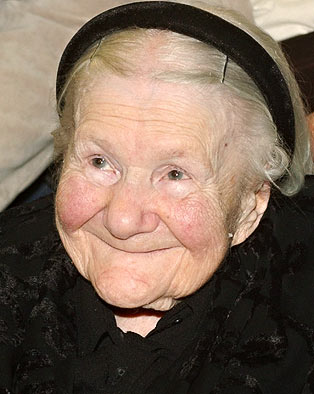 After the war, Irena tried to reunite parents or surviving family members with the children she’d rescued. She was rarely successful.

All told, Irena Sendler saved about 2,400 Jewish children and infants and about 100 teenagers, who went into the forests to join partisan bands fighting the Nazis. The far better known Oskar Schindler is credited with saving less than half that number.

Today, Elzbieta Ficowska tries to keep her Jewish roots, but they seem foreign to her.  ‘When I enter a Catholic church, everything is mine. Sometimes I look in the mirror for traces of my real parents. I sent letters all around the world to try to find out about them.’  She has never seen so much as a photograph.

The Polish Government honored Irena Sendler with the Order of the White Eagle, its highest award. The Yad Vashem Remembrance Center in Jerusalem honored her as a “Righteous Gentile” in 1965. She received honorary citizenship in Israel in 1985, and the Polish and Israeli Governments nominated her for the Nobel Peace Prize in 2007.

The Nobel Prize for Peace was awarded on October 12 in Oslo, Norway, to the Intergovernmental Panel on Climate Change (IPCC) and Albert Arnold Gore Jr. “for their efforts to build up and disseminate greater knowledge about man-made climate change, and to lay the foundations for the measures that are needed to counteract such change”.

Irena Sendler passed away on May 12, 2008 at the age of 98. This choice of 2007 Nobel prize recipients has been controversial, since Nobel by-laws prohibit posthumous award of the prize. Many felt that Sendler had more than earned it. Some have claimed that Nobel committee rules require qualifying work to have taken place within the two years immediately preceding nomination, but I think they’re making it up. I’ve read the Nobel statutes. You can do so yourself, HERE, if you’re so inclined   I find no such requirement.  Let me know if I missed it, the whole thing seems political, to me.

Irena Sendler always said that she wasn’t a hero, she only did what any normal person would do. I find in the story of this petite Polish nurse, some of the most magnificent courage of which our species is capable.  If that does not make her a hero, I don’t know what would.