When Pennsylvania went to war. With Maryland.

The Pennsylvania Charter of 1681 specifies its southern boundary to be “a circle drawne at twelve miles distance from New Castle Northward and Westward unto the beginning of the fortieth degree of Northern Latitude, and then by a streight Line Westward”. The problem is that 40° north latitude is north of Philadelphia. A later survey put New Castle, Pennsylvania 25 miles south of the 40th parallel, well into territory controlled by Maryland. Maryland insisted on the boundary as drawn by the Charter, while Pennsylvania proposed a boundary near 39°36′, creating a disputed zone of some 28 miles. 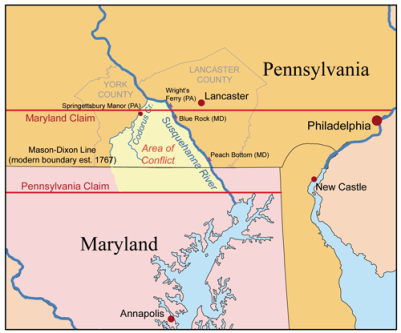 In 1726, Quaker minister John Wright began a “ferry” service across the Susquehanna River. Starting as a pair of dugout canoes, “Pennsylvania Dutch” farmers were soon settling the Conejohela Valley on the eastern border of Maryland and Pennsylvania.

Business was good, by 1730 Wright had applied for a ferry license. With Lord Baltimore fearing a loss of control in the area (read – taxes), Maryland resident Thomas Cresap established a second ferry service up the river. Maryland granted him some 500 acres along the west bank, unconcerned that much of the area was already inhabited by Pennsylvania farmers.

Cresap went to these farmers and began collecting “quit-rents”, (an early form of property tax) for Maryland. Pennsylvania authorities responded by issuing “tickets” to the settlers which, while not granting immediate title, amounted to an “IOU” of title under Pennsylvania jurisdiction.

When Cresap and his ferry worker were thrown overboard by two Pennsylvania residents, probably over a debt owed by the worker, Cresap took the matter to state authorities for justice. After the magistrate said that he couldn’t expect justice in his court because he was a “liver in Maryland”, Cresap filed charges with Maryland authorities, saying that he was a resident of that state, and no longer bound by Pennsylvania law.

Cresap and his gang members began confiscating York and Lancaster county properties as early as 1734, handing them over to supporters. Maryland militia crossed state lines twice in 1736, and Pennsylvania militia soon responded. When Lancaster county Sheriff arrived with a posse to arrest him at his home, Cresap shot deputy Knowles Daunt through the door. When Daunt died of his wounds, Pennsylvania Governor Patrick Gordon demanded that Maryland arrest Cresap for murder. Maryland’s Governor Samuel Ogle responded by naming him a captain in the Maryland militia.

Cresap continued his raids, destroying barns and shooting livestock. Sheriff Samuel Smith raised a posse to arrest him in November. When the Pennsylvanians set his cabin on fire, Cresap ran for the river. Grabbing him before he could launch a boat, Cresap shoved one of them overboard, shouting, “Cresap’s getting away!”, whereupon the other deputies proceeded to pound their colleague with oars until one of them discovered the ruse.

Cresap was taken to Lancaster, where he decked the blacksmith who had come to put him in shackles. He was finally subdued and hauled off to Philadelphia in chains, but even then he was anything but broken. “Damn it”, he said, “this is one of the prettiest towns in Maryland!”

Maryland petitioned King George II, requesting that the King intervene and restore order. George’s proclamation of August 18, 1737 instructed the governments of both colonies to cease hostilities. When that failed to stop the fighting, the Crown organized direct negotiations between the colonies. Peace was signed in London on May 25, 1738, the agreement providing for an exchange of prisoners and a provisional boundary to be drawn fifteen miles south of the southernmost home in Philadelphia.

So ended the “Conojocular War”, named after the Conejohela Valley and sometimes referred to as “Cresap’s War”. Today the area in conflict belongs to York County, Pennsylvania.  The matter was settled once and for all, when surveyors Charles Mason and Jeremiah Dixon established the modern boundary in 1767.