I find it infinitely preferable that we learn from our history, rather than hide from it. 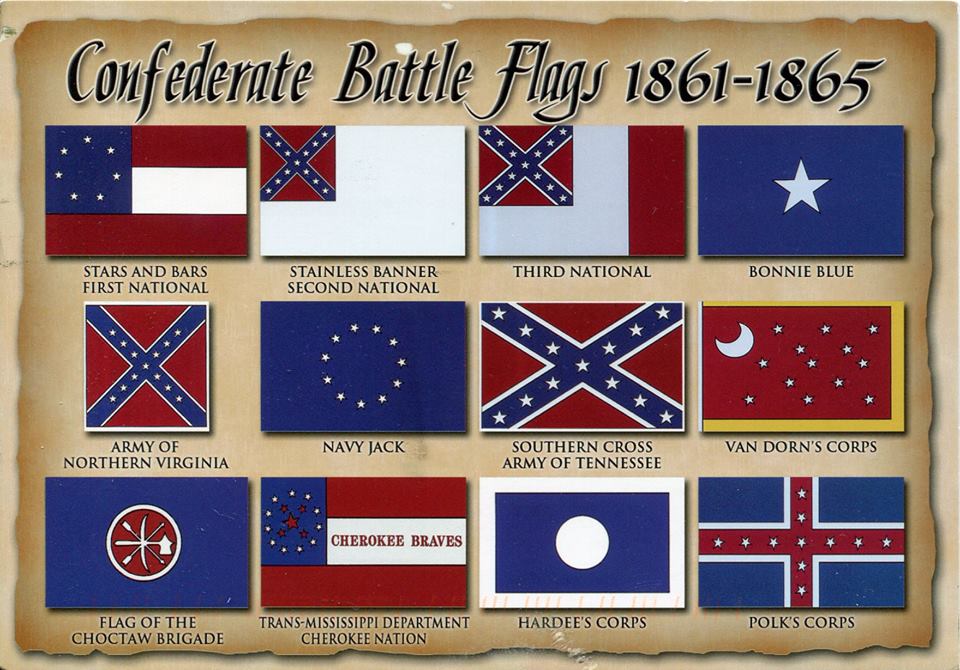 Last week, New Orleans authorities took to the dead of night, to remove monuments to the history of their own city.   The recent fuss about the “Confederate Flag” has faded away, sort of, not so the political atmosphere that gave it birth.   For all that, it seems worth pointing out:  the “Stars and Bars” with which we’ve all become so familiar, never was the flag of the Confederate States of America.  It wasn’t even the real Stars & Bars.

On June 28, 1776, British General Sir Henry Clinton ordered the ship Thunder to attack the Continental fortification on Sullivan’s Island, in Charleston Harbor. The fighting was furious and lasted 16 hours and more. At one point, a British shell tore the flagstaff away. In full view and under constant fire, Sergeant William Jasper of the 2nd South Carolina retrieved the fallen flag of his regiment and fixed it to an artilleryman’s sponge pole. There he stood on the parapet, holding the flag under fire until a new pole could be installed.

Jasper’s heroism had rallied his forces to fight on.  Governor John Rutledge gave him his personal sword, in recognition of his bravery.  The battle was a humiliating defeat for a British fleet that hadn’t been beaten in 100 years. It was four years before they’d take another run at Charleston.

The Liberty Flag or Moultrie flag became a standard for South Carolina militia. A palmetto was added in 1861, a reference to the palm trunks laid over the sand walls of Fort Moultrie, which had helped withstand that British bombardment of 85 years earlier. A variant of this flag appeared at South Carolina’s secession conventions, as did militia and state flags in all the state secession conventions.

When Mississippi seceded in January 1861, a blue flag with a single white star was flown from the capitol dome. This, the first and unofficial flag of the Confederacy, came to be called the “Bonnie Blue Flag”, closely patterned after the flag flown over the short-lived Republic of West Florida in 1810, and adopted by the Congress of the Republic of Texas on December 10, 1836.

The first national flag of the Confederate States of America, the real Stars and Bars, was similar in design to the United States flag. A blue field containing seven, nine, eleven and finally thirteen stars, depending on the period, appeared in the “canton”, or upper left corner. Three stripes of equal height ran from hoist to fly end, alternating red to white and back to red.

Regiments of the era carried flags to help commanders observe and assess the progress of battle. At a distance, the Stars and Bars and the Stars and Stripes were hard to tell apart, particularly in still conditions, or when smoke clouded the view.

The similarity between the two national flags led to confusion at the first battle of Manassas, also known as the first battle of Bull Run. After the battle, Confederate General Pierre Gustave Toutant Beauregard wrote that he was “resolved then to have [our flag] changed if possible, or to adopt for my command a ‘Battle flag’, which would be entirely different from any State or Federal flag”.

The star studded diagonal stripes of the St. Andrew’s Cross is what resulted, becoming Beauregard’s battle flag, as well as that of the Army of Tennessee, the Army of Northern Virginia, and the ensign of the Confederate Navy.

Most submissions for the second national flag incorporated the battle flag into the design. The winning design adopted on May 1, 1863, was called the “Stainless Banner”, placing the Saint Andrews Cross in the canton, the rest of the flag pure white. Visibility remained an issue with this design as with the first; as it was often misinterpreted as a flag of surrender.

The third national flag, also known as the “Blood Stained Banner”, was adopted March 4, 1865. This last design retained the white background with the same canton as before, but now there was a vertical red stripe on the fly end.

The Confederate battle flag enjoyed renewed popularity during the first half of the 20th century. Several WWII military units with Southern nicknames, made the flag their unofficial emblem. The USS Columbia flew a Confederate Navy Ensign throughout combat in the South Pacific. A Confederate battle flag was raised over Shuri Castle after the Battle of Okinawa, by a Marine from Company A of the 1st Battalion, 5th Marines; the self-styled “Rebel Company”. It was visible for miles and was taken down after three days on the orders of General Simon Bolivar Buckner, Jr., son of Confederate general Simon Bolivar Buckner. “Americans from all over are involved in this battle”, said Buckner, replacing it with the US flag.

The symbol became highly controversial during the Civil Rights era, and disagreement continues over its symbolism. Supporters of the flag view it as a symbol of southern heritage and the independence of the distinct cultural tradition of the American South. Civil rights groups associate it with a history of racial discrimination and the institution of slavery.

Now, we have the current government in New Orleans, taking to the dark of night, to remove Confederate memorials from the streets of that city.

In writing these history essays, I hope to learn something new about a subject which interests me.  I enjoy the responses of those who feel the same way. There’s plenty of time for politics and I don’t intend that this blog be the place for it.  Except to say:  I find it infinitely preferable that we learn from our history, rather than hiding from it.