By the siege’s end in the Spring of 1944, nine of them had starved to death, standing watch over all that food.  For twenty-eight months these guys guarded their seed bank, without eating so much as a grain.

In 21st century America, “diversity” is often seen as that overly PC tendency, leading the backdrop of every political speech and college recruiting poster to feature all those smiling faces, in just the right mix of race, sex and color.

In the world of plant biology, diversity can literally mean the difference between feast and famine.

The Irish Potato Famine of the mid-19th century resulted from the failure of a single crop. The direct cause was the water mold Phytophthora infestans, but the real culprit might have been the over reliance on a single strain of potato. A million Irish starved to death and another two million departed, never to return, in a country starting out with barely 8.4 million in 1844.

The Irish potato famine was just one of 120 such calamities to afflict humanity in modern times, resulting in the starvation death of hundreds of millions. Blight, climate disruption and insects are but a few of the causes. Often, the only solution was having enough food-source variety that no single crop failure could lead to starvation.

Nikolai Ivanovic Vavilov was a Russian botanist and plant biologist.  Vavilov witnessed the death of millions of Russians in three such famines, and devoted his life’s work to the improvement of wheat, corn and other food crops necessary to sustain a global population.

Over a lifetime of study of phytopathology and plant immunity, Vavilov organized expeditions and collected plant specimens from every corner of the world. Traveling over 5 continents and 64 countries, “The world’s greatest plant explorer” taught himself no fewer than 15 languages so that he could speak with native farmers, collecting more seeds, edible roots, tubers and fruit specimens than any person in human history.

There is hardly any part of our modern day understanding of crop diversity, that doesn’t go back to the work of this one man.

Nikolai Vavilov was a man of pure science.  Not so his young protege, Trophim Denisovich Lysenko. The younger man was a political opportunist, an apparatchik and crackpot who rejected the natural selection and plant genetics of Gregor Mendel, in favor of a cockamamie theory which came to be called “Lysenkoism”.

Lysenko placed great confidence in the pseudo-scientific theory of environmentally acquired inheritance, by which parent plants pass down to their offspring,  characteristics acquired through use or disuse during their life cycle.  By this theory, rye could transform into wheat, wheat into barley, and weeds somehow transmuted into edible food grains.

In 1928, the previously unknown agronomist from peasant background performed experiments in “vernalization“, claiming to triple or quadruple wheat crop yield by accelerating the life cycle of Autumn-seeded winter wheat varieties.

Intense exposures to cold and humidity including direct seeding into snow-covered, frozen fields were known since 1854 to produce marginal increases in crop yield, but nothing remotely similar to Lysenko’s claims.  Nevertheless, Lysenko was hailed as a hero of Soviet agriculture, particularly in light of the disastrous collectivization efforts of the late 1920s.

As Stalin’s Soviet Union imposed the “terror famine” of 1932-’33, the deliberate starvation of millions of Ukrainian peasant farmers known as the Holodomor.

Lysenko dove into a variety of agriculture issues with “helpful” solutions such as plucking leaves from cotton plants, cluster planting trees and outlandish & unusual fertilizer mixes. A shameless sycophant and toady to Communist ideology, Lysenko gained status among party officials with one harebrained proposition after another, following one after another, far too quickly to be disproven by the patient observation of reputable scientific method.

At this time, the hottest ideas in plant genetics were emerging from biological studies of Drosophila melanogaster, the common fruit fly. Lysenko used his increasing influence in party circles to denounce such scientists as “fly-lovers and people haters”, denouncing the lot of them as “wreckers” who were purposely trying to bring about the downfall of the Soviet government.

As director of the Soviet Academy of Agricultural Sciences, Lysenko put his theories to work, with unsurprisingly dismal results.  He’d force Soviet farmers to plant WAY too close together, on the theory that plants of the same “class” would “cooperate” with one another, and that “mutual assistance” takes place within and even across plant species.

There had to be a reason why Stalin’s agricultural program wasn’t working. There had to be scapegoats.  In a 1935 speech, Lysenko compared dissenting biologists to peasants continuing to resist Soviet collectivization policies, denouncing traditional geneticists as being “against Marxism”.  Josef Stalin himself was in the audience, and jumped up clapping enthusiastically, calling out “Bravo, Comrade Lysenko. Bravo.”

The gloves were now off. Lysenko and his chief ally Isaak Izrailevich Prezent savaged Lysenkoism’s opponents, including his former mentor, himself.  Over 3,000 mainstream biologists were fired, “disappeared” or even executed, among them Nikolai Vavilov.

On August 6, 1940, Vavilov was on expedition in Ukraine, collecting specimens when he was snatched up and driven away in a black sedan, his staff helpless to intervene. Vavilov was sentenced to death in 1941 with sentence later commuted to twenty years.  It didn’t matter. In January 1943, this man whose scientific work was at least as important as that of Norman Borlaug, starved to death in a Soviet Gulag.

Nikolai Vavilov had collected some 220,000 specimens of edible fruits, seeds and tubers over the years, which now sat in a Leningrad basement. 120,000 additional specimens were added to the hoard from other collectors, bringing the entire cache well into the tons of edible plant material.

On September 8, 1941 the German Wehrmacht completed its encirclement of the city.  The siege of Leningrad lasted for twenty-eight months.  Hunger soon took hold and, before it was over, more than a million Leningrad residents starved to death.

Soviet authorities had ordered the removal of art from the Hermitage prior to the siege, but not these botanical specimens.  Scientists couldn’t know where their leader was, or even whether he yet lived.  They locked themselves in the basement with their trove and took turns standing guard, protecting future food crops and the survival of untold millions, yet unborn. 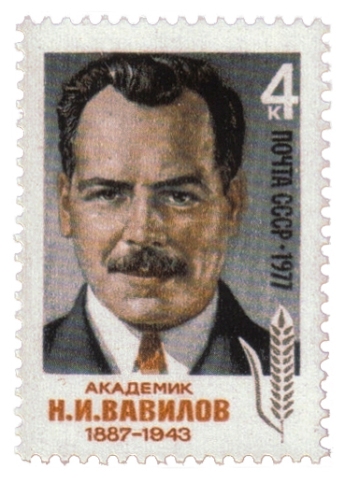 By the siege’s end in the Spring of 1944, nine of them had starved to death, standing watch over all that food.  These guys had stood guard over their seed bank for twenty-eight months, without eating so much as a grain.

The verdict against Nikolai Vavilov was set aside in 1955, one of thousands of reversals of Stalin era death sentences. Vavilov’s reputation was publicly rehabilitated by the 1960s.  In time he would come to be seen as a hero of Soviet-era science.

Trofim Lysenko would outlive his benefactor Stalin, and retained influence into the era of Nikita Khruschchev.  Lysenkoism was officially renounced in 1964, the bureaucrat denounced by physicist and human rights activist, Andrei Sakharov. “He is responsible for the shameful backwardness of Soviet biology and of genetics in particular, for the dissemination of pseudo-scientific views, for adventurism, for the degradation of learning, and for the defamation, firing, arrest, even death, of many genuine scientists“.  The disgraced apparatchik died in 1976.  It took Soviet media two days to so much as mention his passing, with a small notice printed in the broadsheet, Izvestia.

In the funhouse mirror world of the Soviet Union, the future was always known.  It was the past, that was subject to change.

Still home to the largest collection of plant genetic material in the world, the N.I. Vavilov Institute of Plant Industry in St. Petersburg was scheduled to be razed in 2010, to make way for luxury housing.  Scientists from around the world petitioned Russian President Dmitri Medvedev to rethink the decision, and not destroy the largest collection of European fruits and berries in the world.  At this time, the decision is undergoing “further study”.

For all the good it did the institute’s namesake, long-since murdered by the malignant ideology he had spent his life’s work, attempting to serve.