There is an oft-repeated but mistaken notion that the circus goes back to Roman antiquity.  The panem et circenses, (bread and circuses)” of Juvenal, ca AD100, refers more to the ancient precursor of the racetrack, than to anything resembling a modern circus. The only common denominator is the word itself, the Latin root ‘circus’, translating into English, as “circle”.

The father of the modern circus is the British Sergeant-Major turned showman, Philip Astley.  A talented horseman, Astley opened a riding school near the River Thames in 1768, where he taught in the morning and performed ‘feats of horsemanship’ in the afternoon.  Equestrian and trick riding shows were gaining popularity all over Europe at this time, performers riding in circles to maintain balance while standing on the backs of galloping horses.  It didn’t hurt matters, that the “ring” made it easier for spectators to view the event.

These afternoon shows gained overwhelming popularity by 1770, and Astley hired acrobats, rope-dancers, and jugglers to fill the spaces between equestrian events.  The modern circus, was born.

From that day to this, the “Fancy Pants” dresses in red tailcoat and top hat, evocative of British fox hunting garb. This “Announcer” is commonly (and mistakenly) called the “ringmaster”, while the true ring master is the “equestrian director”, standing in the center of the ring and pacing horses for the riding acts.

In 1825, Joshuah Purdy Brown of Somers New York replaced the wooden structure common to European circuses with a canvas tent, around the time when cattle dealer Hachaliah Bailey bought a young African elephant, and began to exhibit the animal all over the country.

The exotic animal angle was a great success.  Other animals were added, and farmers were soon leaving their fields to get into the traveling menagerie business.  The unique character of the American traveling circus emerged in 1835, when 135 such farmers and menagerie owners combined with three affiliated circuses to form the American Zoological Institute.

Phineas Taylor Barnum and William Cameron Coup launched P.T. Barnum’s Museum, Menagerie & Circus in 1871, where the “museum” part was a separate exhibition of human and animal oddities.  It wouldn’t be long, before the ‘sideshow” became a regular feature of the American circus. 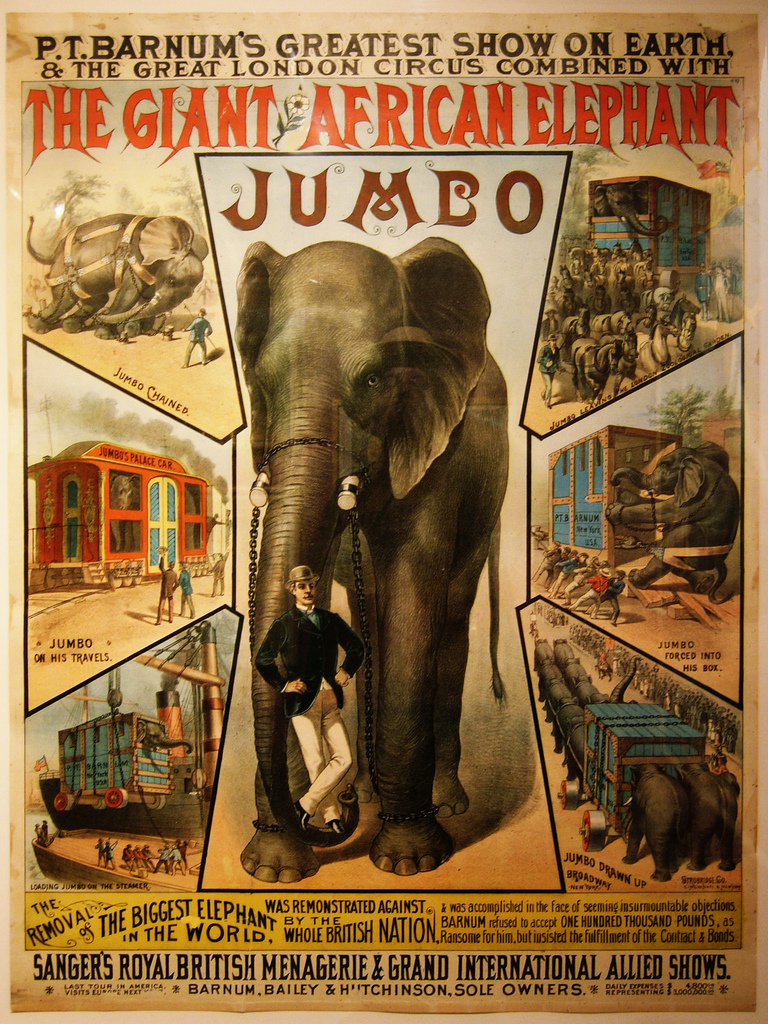 There have been no fewer than 81 major circuses in American history, and countless “Dog & Pony” shows, programs so small as to include only a few family members and an assistant or two, with a couple of trained animals.  And all this time, I thought ‘Dog & Pony Show’ referred to the United States Congress.

The ‘Greatest Show on Earth’ closed for the last time on Sunday, May 21 2017, when ‘animal rights activists’ and changing tastes in entertainment finished the Ringling Brothers, Barnum & Bailey Circus, ending a 146-year run.

In the mid-19th century, German animal trainer Carl Hagenbeck toured Europe with “ethnographical” spectacles, combining animals with native peoples such as the Sámi of the Scandinavian peninsula, complete with reindeer and sleds. Hagenbeck was among the first to develop animal training methods based on trust and reward rather than pain

and fear, his demonstrations emphasizing the animal’s intelligence and tractability over ferocity.

In 1906, Hagenbeck sold his traveling animal show to American circus operator Benjamin Wallace, before going on to develop open zoological gardens and native panoramas which would be familiar to today’s zoo enthusiast, rather than the barred cells of his day.

The American war machine was spinning up to peak operational capacity in 1918, as the industrial might of the nation pursued an end to the war ‘over there’.

Hagenbeck-Wallace was one of the premier circuses of the day, moving about the country on three trains and employing no fewer than 1,000 roustabouts and assorted performers.

In the small hours of  June 22, an engineer with the Michigan Central Railroad was at the wheel of Train No. 41, an empty 21-car troop train.  Automatic signals and flares and at least one frantic signalman should have warned the driver that a stalled train lay on the track ahead, but he missed them all.  Alonzo Sargent was asleep at the wheel.

The following day, newspapers across the country told the story of  what happened next.

On June 22, the circus was scheduled to appear at the Show Grounds at 150th and Calumet Avenue in Hammond, Indiana.  In the early morning darkness, an overheated axle box required one train to make an unscheduled stop.  It was 4am and most of the circus’ employees were asleep, when the Michigan Central locomotive smashed into the rear of the stalled train. 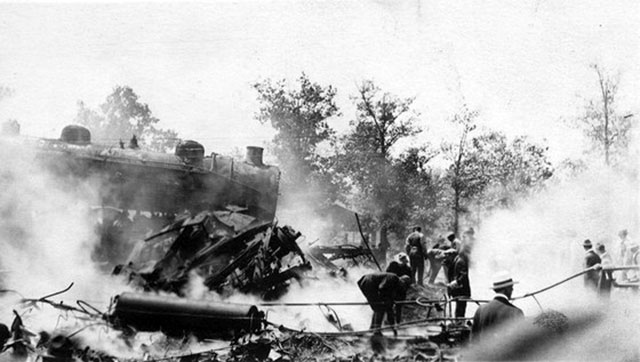 Those lucky enough to escape the horror were forced to watch in disbelief as friends, families and co-workers were incinerated alive.

Hours later a clown, “Big Joe” Coyle, could be seen weeping, beside the mangled bodies of his wife and two small boys.

127 were injured and an estimated 86 crushed or burned to death in the wreck.  The rumor mill went berserk.  Wild lions and tigers had escaped and were roaming the streets and back yards of Gary, Indiana.  Elephants died in an heroic attempt to put out the flames, spraying water on the burning wreckage with their trunks.

None of the stories were true.  The animals had passed through hours before on an earlier caravan, and now awaited a train which would never come.

The Showmen’s League of America was formed in 1913, with Buffalo Bill Cody its first President.  The group had recently purchased a 750-plot parcel at the Woodlawn Cemetery in Forest Park, Illinois and called it “Showmen’s Rest”, having no idea their investment would be used so soon.

A mass grave was dug for the unidentified and unidentifiable.  Some of the dead were roustabouts or temporary workers, hired only hours or days earlier.  Some performers were known only by stage names, their gravestones inscribed with names like “Four-Horse Driver”,  “Baldy” and “Smiley”.

The Hagenbeck-Wallace circus was a big deal in those days.  Famed lion tamer Clyde Beatty was a member, as was a young Red Skelton, tagging along with his father, who worked as a clown. 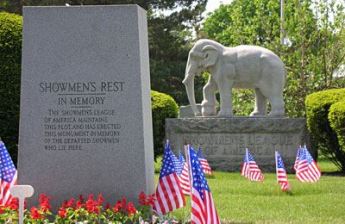 Only two shows had to be canceled, as erstwhile ‘competitors’ Barnum & Bailey and others lent workers, performers and equipment.  The show would go on.

In the world of elephants, an upraised trunk carries connotations of joy, while a lowered trunk symbolizes mourning.  At the Woodlawn cemetery of Chicago, five elephant statues circumscribe the mass grave of clowns, trapeze artists, strongmen and other circus performers.  Each has a foot raised with a ball underneath.  Every trunk, hangs low.  The largest of the five bears the inscription, “Showmen’s League of America.”  On the other four are inscribed the words “Showmen’s Rest”.