The General Slocum disaster killed fewer than one per cent of the overall population of Little Germany, yet these were the women and children of some of the community’s most established families. 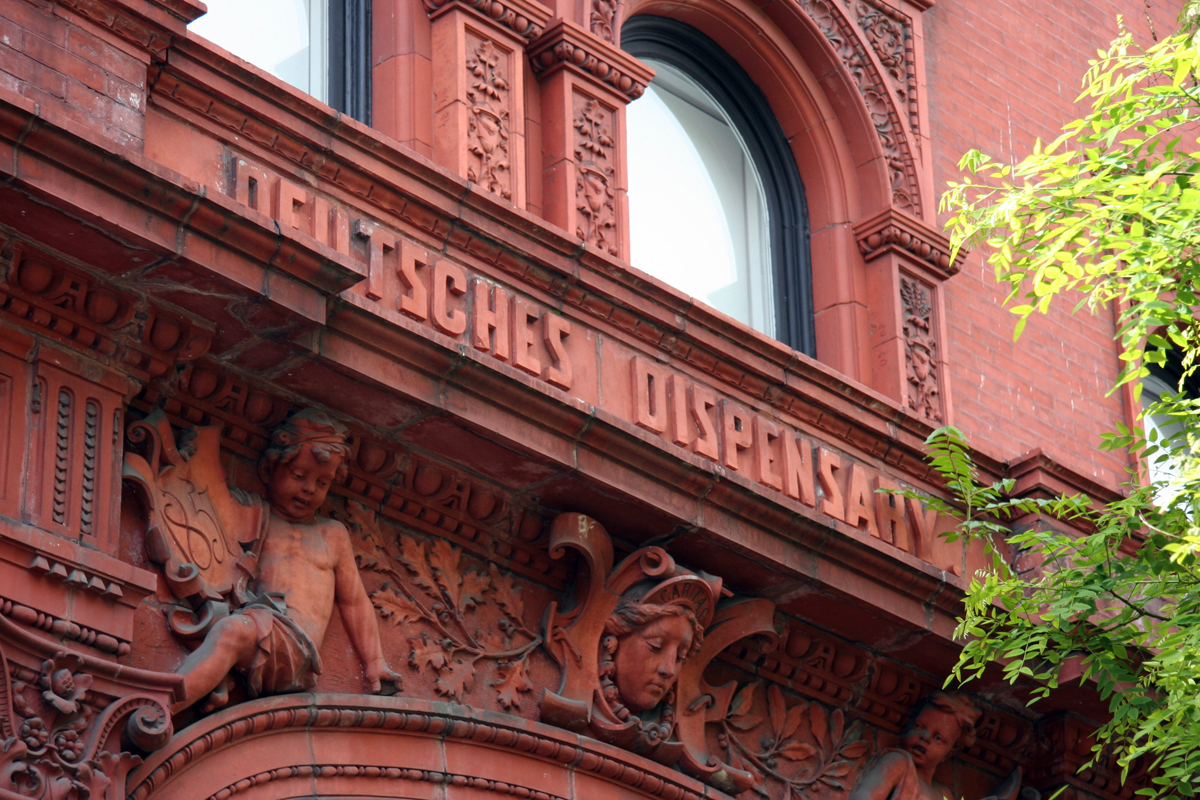 In the first full century of American independence, three great waves of European and later Asian immigrants left their homes in the ‘old country’, headed for a life in the new world. 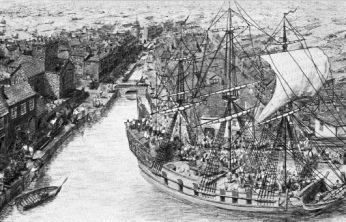 Starvation, shipwreck and disease killed no fewer than 1 in 10 during the period 1790 – 1820, without any so much as setting foot in the new world. And still they came.

The largest non-English speaking minority were the ethnic Germans, escaping economic hardship and in search of political freedom.  At the time of the Civil War, nearly one-quarter of all Union troops were German Americans, some 45% of whom were born in Europe.

German migration rose faster than any other immigrant group through the latter part of the 19th century and into the 20th, many in pursuit of agricultural opportunity while others settled in major cities such as New York and Philadelphia.

Kleindeutschland, or “Little Germany”, occupied some 400 blocks on the Lower East Side of Manhattan, in what is now the East Village. “Dutchtown”, as contemporary non-Germans called the area, was home to New York’s German immigrant community since the 1840s, when they first began to arrive in significant numbers. By 1855, New York had the largest ethnically German community in the world, save for Berlin and Vienna.

June 15, 1904 dawned bright and beautiful on Little Germany, a beautiful late spring morning when the sidewheel Passenger Steamboat General Slocum left the dock and steamed into the East River.

PS General Slocum was on a charter this day, carrying German-American families on an outing from St. Mark’s Lutheran Church on a harbor cruise and picnic. Over a thousand tickets were sold, not counting 300+ children who were sailing for free.

There were 1,342 people on board, mostly women and children, including band, crew and catering staff.

The fire probably started when someone tossed a cigarette or match into the forward section lamp room. The flames spread quickly, fueled by lamp oil and oily rags.  A 12-year old boy first reported the fire, but the Captain didn’t believe him.  The fire was first noticed at around 10:00am.

The ships’ operators had been woefully lax in maintaining safety equipment. Now it began to show. Fire hoses stored in the sun for years were uncoiled, only to break into rotten bits in the hands of the crew. Life preservers manufactured in 1891 had hung unprotected in the sun for 13 years, their canvas covers splitting apart pouring useless cork powder onto the floor. Survivors reported inaccessible life boats, wired and painted into place. 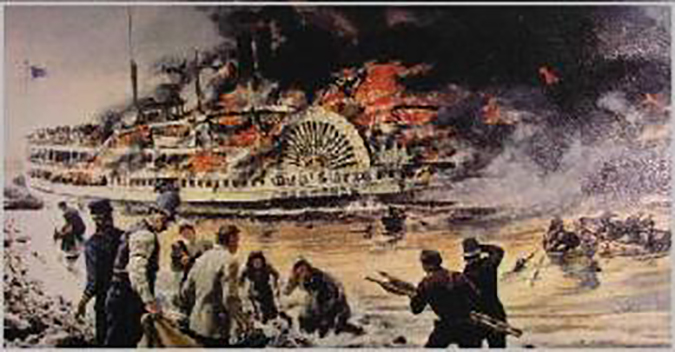 Crew members reported to Captain William van Schaick that the blaze “could not be conquered.” It was “like trying to put out hell itself.” The captain ran full steam into the wind trying to make it to the 134th Street Pier, but a tug boat waved them off, fearing the flames would spread to nearby buildings.

The wind and the speed of the ship itself whipped the flames into an inferno as Captain van Schaick changed course for North Brother Island, just off the Bronx’ shore.
Many jumped overboard to escape the inferno, but the heavy women’s clothing of the era quickly pulled them under.

Desperate mothers put useless life jackets on children and threw them overboard, only to watch in horror as they sank. One man, fully engulfed in flames, jumped screaming over the side, only to be swallowed whole by the massive paddle wheel.

One woman gave birth in the confusion, and then jumped overboard with her newborn to escape the flames. They both drowned.

A few small boats were successful in pulling alongside in the Hell’s Gate part of the harbor, but navigation was difficult due to the number of corpses already bobbing in the waves. 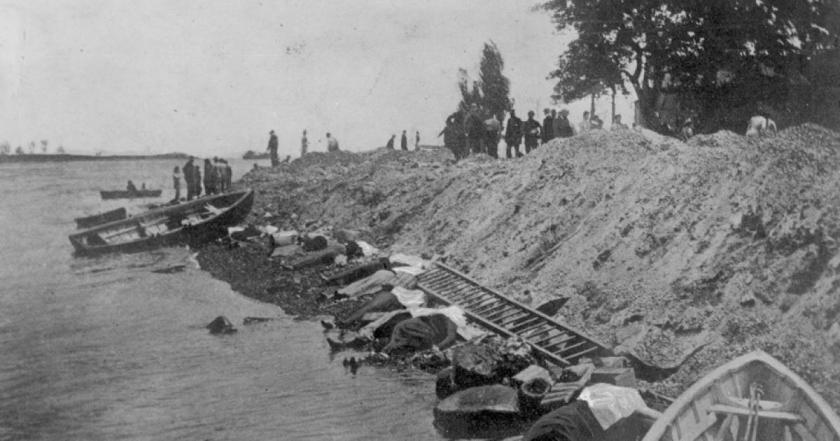 Holding his station despite the inferno, Captain van Schaick permanently lost sight in one eye and his feet were badly burned by the time he ran the Slocum aground at Brother Island.

Patients and staff at the local hospital formed a human chain to pull survivors to shore as they jumped into shallow water.

1,021 passengers and crew either burned to death, or drowned. It was the deadliest peacetime maritime disaster, in American history.

There were only 321 survivors.

The youngest survivor of the disaster was six-month-old Adella Liebenow. The following year at the age of one, Liebenow unveiled a memorial statue to the disaster which had killed her two sisters and permanently disfigured her mother.

The New York Times reported “Ten thousand persons saw through their tears a baby with a doll tucked under her arm unveil the monument to the unidentified dead of the Slocum disaster yesterday afternoon in the Lutheran Cemetery, Middle Village, L.I.”

Both of Liebenow’s sisters were among the unidentified dead.

The General Slocum disaster killed fewer than one per cent of the overall population of Little Germany, yet these were the women and children of some of the community’s most established families.

There were more than a few suicides.  Mutual recriminations devoured much of a once-clannish community, as the men began to move away.

There was no longer anything for them, in that place.

Deep inside the East Village, amidst the hipsters and the poets’ cafes of “Alphabet City”, stands a forgotten memorial.  A 9′ stele erected in Tompkins Square Park, sculpted from pink Tennessee Marble. The relief sculpture shows two children, beside them are inscribed these words: “They were Earth’s purest children, young and fair.”