British envoys delivered proclamations reaffirming the practice of impressment, amounting to the kidnapping of sailors and forcing their labor aboard British ships. In total, the Royal Navy impressed over 9,000 sailors claiming to be American citizens, becoming the driving force behind the United States going to war with England, in 1812. 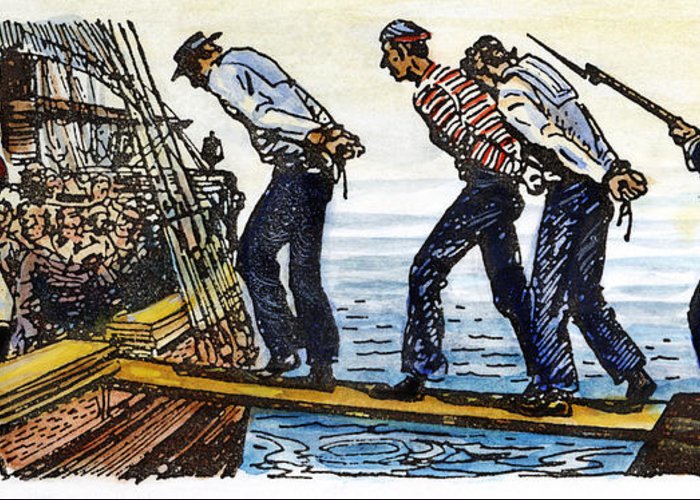 The Napoleonic Wars took place between 1799 and 1815, pitting a series of seven international coalitions against the forces of Napoleon Bonaparte and his Grande Armée.  The former American colonies benefited from the European conflict, remaining on the sidelines and doing business with both sides.  Within a ten-year period, the fledgling United States had become one of the world’s largest neutral shippers.

In 1807, two third-rate French warships were penned up in Maryland’s Chesapeake Bay, blockaded by a number of English warships outside of the harbor.

London born Jenkin Ratford was an English sailor who deserted the British Navy and defected to the neutral United States.  This story might have ended better for him had he not run his mouth, but that wasn’t this guy.  Ratford couldn’t resist taunting British officers, boasting of his escape to the “land of liberty”

The USS Chesapeake was preparing for a Mediterranean cruise with Ratford aboard, when she emerged from Norfolk, Virginia.  Her decks were laden with supplies and stores of every kind, and her guns unwisely stored.  Chesapeake was nowhere near combat ready when she was approached by the HMS Leopard on June 22.

The Chesapeake’s commander, Commodore James Barron, was unconcerned when the Leopard, under the command of Captain Salusbury Pryce Humphreys, asked permission to board.  Lieutenant John Meade of Her Majesty’s Navy presented Barron with a search warrant.  Barron declined to submit, and the officer returned to the Leopard. 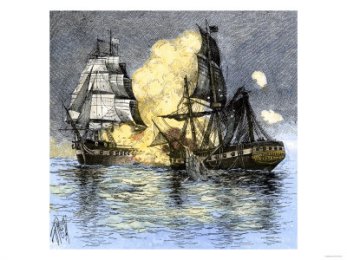 Humphreys then used a hailing trumpet and ordered the American ship to comply, to which Barron responded “I don’t hear what you say”. Humphreys fired two rounds across Chesapeake’s bow, followed immediately by four broadsides.

Chesapeake fired a single shot before striking colors and surrendering.  Humphreys refused the surrender and boarded, taking Ratford and three American born sailors with them when they left.

There was little resistance, yet the “Chesapeake-Leopard Affair” had left three American crewmembers dead, and 18 wounded.

American public opinion was outraged over the humiliation, as the four men were transported to Halifax for trial.   Federalists and Democratic-Republicans were united as never before.  President Thomas Jefferson remarked “Never since the Battle of Lexington have I seen this country in such a state of exasperation as at present, and even that did not produce such unanimity.”

The English court found all four guilty of desertion and hanged Ratford by the fore yardarm of his former vessel, HMS Halifax.  The three Americans, David Martin, John Strachan, and William Ware, were sentenced to 500 lashes.

With the puny American navy deployed to the Mediterranean to check the Barbary pirates, President Jefferson’s options were limited to economic retaliation.  The Embargo Act of 1807 intended to extract concessions from France and Great Britain, instead had the effect of imposing crippling setbacks on some industries, while others railed against government interference in the private economy.  Many came to the conclusion that the only solution, lay in violence.

British envoys delivered proclamations reaffirming the practice of impressment,  amounting to the kidnapping of sailors and forcing their labor aboard British ships.  In total, the Royal Navy impressed over 9,000 sailors claiming to be American citizens, becoming the driving force behind the United States going to war with England, in 1812.

Despite being wounded, Barron was blamed for the “Chesapeake-Leopard Affair”.  A court-martial suspended him from service for five years, without pay.   Commodore Stephen Decatur was one of the presiding officers at the court-martial. In 1820, Barron challenged Decatur to a duel, killing his fellow Commodore over comments concerning the 1807 incident.

United States Naval Captain James Lawrence was eager to comply, confident in the wake of a number of American victories in single-ship actions.

It was a Big mistake.

All of Boston turned out that June day, to watch the fight.  Cheers went out across the docks and from scores of private vessels across Boston Harbor, as Chesapeake slipped her moorings and glided out of the harbor.

Boston authorities reserved dock space in expectation of a guest.  The arrival of a captured British frigate, so it was thought, was a foregone conclusion. Rooftops, hills and trees from Lynn to Malden and Cohasset to Scituate were crowded with spectators, come to watch the show.

The tale of the Battle of Boston Harbor must be a story for another day.  Suffice it to say that USS Chesapeake ended her career as the British frigate HMS Chesapeake, before being sold for scrap, in 1819.  Two-hundred years later, the ship’s timbers live on.  Part of the Chesapeake Mill in the historic village of Wickham, in Hampshire, England.