The age of one-ball-per-game died with Ray Chapman, the only player in the history of Major League Baseball, to die from injuries sustained during a game.. The lively ball era had begun. Batters loved it, but pitchers complained about having to handle all those shiny new balls.

The former Boston Braves pitcher Max Surkont, once said “Baseball was never meant to be taken seriously — if it were, we would play it with a javelin instead of a ball”.

I’m not sure about javelins, but this I know.  There’s nothing more fun at a baseball game, than watching a home run head for the bleachers.

Yet, as much as we all like to see a home run, that’s not always how the game was played. The “Hitless Wonders” of the Chicago White Sox won the 1906 World Series with a .230 club batting average. Manager Fielder Jones said “This should prove that leather is mightier than wood”.  Fielder Allison Jones, that’s the man’s real name.  If that’s not the greatest baseball name ever, it’s got to be one of the top five.

This was the “dead-ball” era, when an “inside baseball” style of play relied on stolen bases, hit-and-run plays and, more than anything else, speed.  Cumulative Major League batting averages stayed between .239 and .279 in the National League.  American League averages remained between .239 and .283.  In 1908, every team in Major League Baseball combined for an average of only 3.4 runs per game.

That’s not to say there were no power hitters. In some ways, a triple may be more difficult than a home run, requiring a runner to cover three bases in the face of a defense still in possession of the ball. Pittsburgh Pirates outfielder Owen “Chief” Wilson set a record of 36 triples in 1912. “Wahoo” Sam Crawford hit a career record 309 triples in his 18 years in Major League Baseball, playing for the Cincinnati Reds and Detroit tigers between 1899 and 1917. 100 years later, it’s unlikely that either record will ever be broken.

In a time when Barry Bonds holds the single season home record at 73, it’s hard to get your head around what a spectacular feat it was, when Babe Ruth hit 29 in 1919.

In his 1994 television miniseries “Baseball”, Ken Burns explains “The moment a new ball was thrown onto the field, part of every pitchers job was to dirty it up. By turns they smeared it with mud, licorice, tobacco juice, it was deliberately scuffed, sandpapered, cut, even spiked. The result was a misshapen earth-colored ball that traveled through the air erratically, tended to soften in the later innings. And as it came over the plate, was very hard to see.” 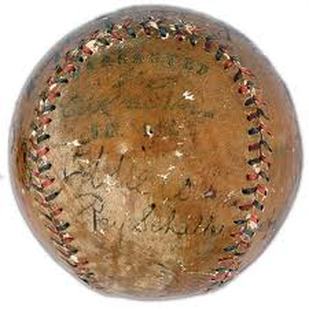 Spitballs lessened the natural friction with a pitcher’s fingers, reducing backspin and causing the ball to drop. Sandpapered, cut or scarred balls tended to “break” to the side of the scuff mark.

Balls were rarely replaced in those days.  By the end of a game, the ball was scarred, misshapen and entirely unpredictable.  Major League Baseball outlawed “doctored” pitches on February 10, 1920, though entire games continued to be played with the same ball.

The first-ever game to be played “under the lights” was forty years in the past in 1920, but it would be another 15 before the practice became widespread.

On the late afternoon of August 16, the Cleveland Indians were playing the New York Yankees at the Polo Grounds. Cleveland shortstop Ray Chapman took the plate in the top of the 5th, facing “submarine” pitcher Carl Mays.

Submarine pitches are not to be confused with the windmill underhand pitches we see in softball.  Submarine pitchers throw side-arm to under-handed, their upper bodies so low that some of them scuff their knuckles on the ground, the ball rising as it approaches the strike zone.

Chapman may not have seen the pitch coming, because he never moved.  The crack of the ball as it hit his head was so loud that Mays thought he had hit the end of the bat, fielding the ball and throwing to first for the out. Wally Pipp, the first baseman best known for getting a headache and losing his starting position to Lou Gehrig, immediately knew something was wrong. The batter made no effort to run, collapsing slowly to the ground with blood streaming out of his ear.

The age of one-ball-per-game died with Ray Chapman, and with it the era of the dead ball. The lively ball era, had begun. Batters loved it, but pitchers complained about having to handle all those shiny new balls.

Philadelphia Athletics third base coach Russell Aubrey “Lena” Blackburne took up the challenge in 1938, scouring the riverbanks of New Jersey for just the right mud. Blackburne found his mud hole on the banks of the Delaware River, describing the stuff as “resembling a cross between chocolate pudding and whipped cold cream”. By the time of his death in the late 1950s, Blackburne was selling his “Baseball Rubbing Mud” to every major league ball club in the country, and most minor league teams. 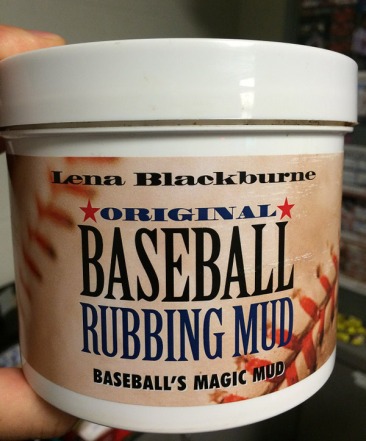 In a world where classified government information is kept on personal email servers, there are still some secrets so pinky-swear-double-probation-secret that the truth may Never be known. Among them Facebook “Community Standards” algorithms, the formula for Coca Cola, and the secret fishing hole where Lena Blackburne’s Baseball Rubbing Mud comes from.

Nobody knows, but one thing is certain. The first pitchers will show up to the first spring training camp, a few short days from now. Every baseball thrown from pre-season to the last pitch of the 2018 World Series, will first have been de-glossed with Lena Blackburne’s famous, Baseball Rubbing Mud.