From the 7th century BC, the Roman calendar attempted to follow the cycles of the moon. The method frequently fell out of phase with the change of seasons, requiring the random addition of days. The Pontifices, the Roman body charged with overseeing the calendar, made matters worse. They were known to add days to extend political terms, and to interfere with elections. Military campaigns were won or lost due to confusion over dates. By the time of Julius Caesar, things needed to change. 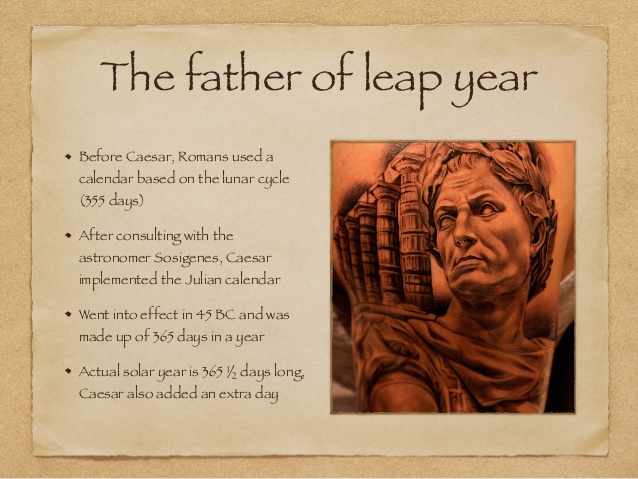 Caesar hired the Alexandrian astronomer Sosigenes to help straighten things out. The astronomer calculated that a proper year was 365¼ days, which more accurately tracked the solar, and not the lunar year. “Do like the Egyptians”, he might have said, the new “Julian” calendar went into effect in 46BC. Caesar decreed that 67 days be added that year, moving the New Year’s start from March to January 1. The first new year of the new calendar was January 1, 45BC.

Caesar synchronized his calendar with the sun by adding a day to every February, and changed the name of the seventh month from Quintilis to Julius, to honor himself. Rank hath its privileges.

Not to be outdone, Caesar’s successor changed the 8th month from Sextilis to Augustus. 2,062 years later, we still have July and August.

Sosigenes was close with his 365¼ day long year, but not quite there. The correct value of a solar year is 365.242199 days.  By the year 1000, that 11-minute error had added seven days. To fix the problem, Pope Gregory XIII commissioned Jesuit astronomer Christopher Clavius to come up with yet another calendar. The Gregorian calendar was implemented in 1582, omitting ten days and adding a day on every fourth February.

For years, New Years’ eve celebrations were held at Trinity Church, where revelers would gather to “ring in the new”. The New York Times newspaper moved into “Longacre Square” just after the turn of the 20th century.   Times owner Adolph Ochs held his first fireworks celebration on December 31, 1903, with almost 200,000 people attending the event.  Four years later, Ochs wanted a bigger spectacle to draw attention to the newly renamed Times Square. He asked the newspaper’s chief electrician, Walter Painer, for an idea. Painer suggested a time ball.

A time ball is a marine time signaling device, a large painted ball which is dropped at a predetermined rate, enabling mariners to synchronize shipboard marine chronometers for purposes of navigation. The first one was built in 1829 in Portsmouth, England, by Robert Wauchope, a Captain in the Royal Navy.

Time balls were obsolete technology by the 20th century, but it fit the Times’ purposes, nicely.  A young immigrant metalworker named Jacob Starr designed a 5′ wide, 700-lb iron and wooden ball, decorated with 100 25-watt incandescent bulbs.  For most of the twentieth century the company he founded, sign maker Artkraft Strauss, was responsible for lowering the ball. 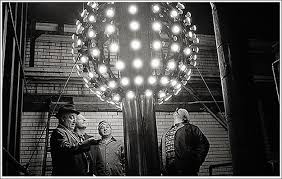 That first ball was hoist up a flagpole by five men on December 31, 1907. Once it hit the roof of the building, the ball completed an electric circuit, lighting up a sign and touching off a fireworks display.

The newspaper no longer occupies the building at 1 Times Square, but the tradition continues.  One of seven versions of the Times Square ball has marked the coming of the new year ever since, with the exceptions of 1942 and ’43, due to the wartime need to dim out the lights.

The version used the last few years is 12′ wide, weighing in at 11,875lbs; a great sphere of 2,688 Waterford Crystal triangles, illuminated by 32,256 Philips LED bulbs and producing more than 16 million colors.  It used to be that the ball only came out for New Year.  The last few years, you can see the thing, any time you like. 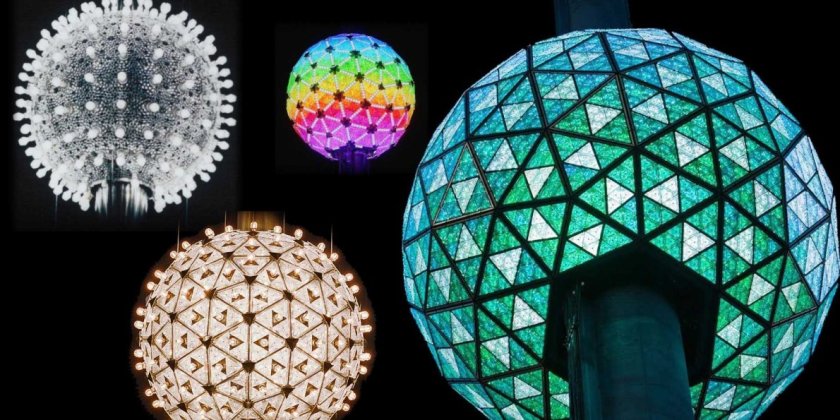 In most English-speaking countries, the singing of “Auld Lang Syne”, is the traditional end to the New Year’s celebration.  Written by the Scottish poet Robert Burns in 1788, the tune comes from an old pentatonic Scots folk melody. The original verse, phonetically spelled as a Scots-speaker would pronounce it, sounds like this:

An will tak a cup o kyndnes yet, fir ald lang syn”.

“We twa hay rin aboot the braes, an pood the gowans fyn;

“We twa hay pedilt in the burn, fray mornin sun til dyn;

“An thers a han, my trustee feer! an gees a han o thyn!